Joe Biden Calls Xi Jinping to 'Reminisce' About 'Traveling Together'

U.S. President Joe Biden called Chinese leader Xi Jinping on Thursday to discuss bilateral relations between Washington and Beijing and allegedly used some of the 90-minute phone call to “reminisce” with Xi about their previous “travels together,” the Associated Press (AP) reported.

“The two spent time on the call reminiscing about their time traveling together when they were both vice presidents,” the AP reported on September 9, citing a “senior [Biden] administration official” who spoke to the news agency on the condition of anonymity as he “was not authorized to comment publicly” on the matter.

Biden initiated Thursday’s telephone conversation with Xi, according to Chinese state media. The call marked the second such dialogue between the two heads of state since Biden took office in January.

The U.S. government’s official policies toward China have caused “serious difficulties” for the Washington-Beijing bilateral relation, Xi told Biden during their conversation.

“This is not in the basic interests of the two peoples,” he added, according to Xinhua.

“Chinese-U.S. confrontation will bring disaster to both countries and the world,” Xi predicted.

“Getting the relationship right is not optional, but something we must do and must do well,” Xi affirmed, as quoted by China’s state-run Global Times.

Biden called Xi “on Friday morning,” according to Xinhua, or on the morning of September 10 in Beijing and sometime in the evening on September 9 in Washington, D.C., China’s revelation about the call’s timing means Biden reached out to Xi mere hours after ordering a sweeping new federal mandate in the U.S. that would require as many as 100 million Americans to receive a Chinese coronavirus vaccine or face losing their jobs.

Biden in his phone call with Xi on Thursday “reiterated… that the U.S. has no intention of changing its one-China principle,” according to the Global Times. “It is prepared to have more candid exchanges and constructive discussions with China to identify key and priority areas where cooperation is possible, avoid miscommunication, miscalculation and unintended conflict, and get U.S.-China relations back on track.” 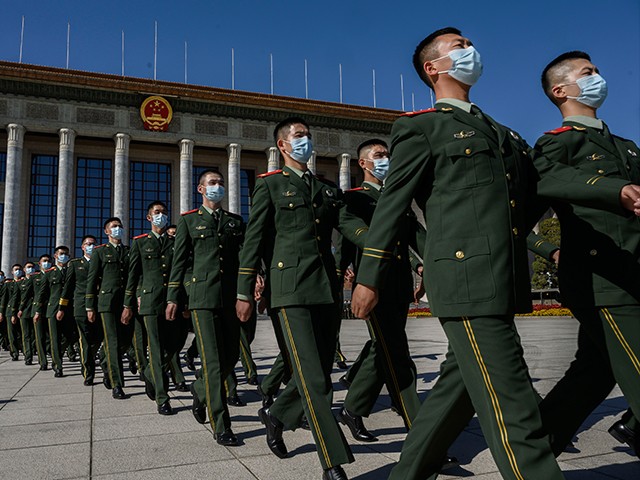 Chinese soldiers from the People’s Liberation Army wear protective masks as they march after a ceremony marking the 70th anniversary of China’s entry into the Korean War, on October 23, 2020, at the Great Hall of the People in Beijing, China. (Kevin Frayer/Getty Images)

The one-China policy is a diplomatic acknowledgment of Beijing’s position that there is only one Chinese government ruled by the Chinese Communist Party (CCP). Washington recognizes and maintains formal ties with Beijing according to this policy, which forces the U.S. to limit its relationship with Taiwan. The CCP considers Taiwan a renegade province and has vowed to “reunify” the island with China by force if necessary.

Taiwan is an independent, sovereign nation with its own government and military. The island, located off China’s southeastern coast, is highly coveted by Beijing for its unparalleled manufacture of microchips. The Taiwan Semiconductor Manufacturing Co. singlehandedly produces nearly all of the world’s microchip supply.

China and the U.S. are the world’s two largest economies, and Biden assured Xi on Thursday that he would avoid allowing competition between the two giants to give way to conflict. Washington’s reassurances to Beijing on Thursday “lifted hopes for trade between the leading economies,” according to Markets Insider, which reported a rise in global stocks on Friday.