For his directorial debut, Jeymes “The Bullitts” Samuel lifts The Harder They Fall’s pedestrian and over-plotted script (which he co-wrote) with an evident passion for the Western genre, buckets of style, and a fabulous cast.

The story is pure fiction, but the characters are based on real cowboys. The plot revolves around two separate black cowboy gangs who go to war with one another.

On one side, there’s Nat Love (a superb Jonathan Majors), whose motive is pure revenge mixed with his love for Stagecoach Mary (a gorgeous Zazie Beetz).

On the other side is Rufus Buck (Idris Elba, who’s finally found a movie role worthy of his talents). Buck’s just wheedled his way out of a life sentence and sets out to reclaim his town and build his paradise. But Buck is pure villain, a cold-blooded murderer and sociopath ready to gun down anyone who stands in his way or offends. His sidekick, Trudy Smith (Regina King), is no less lethal.

The movie opens with three startling murders depicted with directorial swagger and music that has no place in the 1880s. At first, it’s pretty cool. Then it gets a bit tiring. But before it becomes too much, the plot finally settles down to arrange the pieces necessary for the coming confrontation. Memorable characters, spicy dialogue, and Delroy Lindo’s smooth and competent presence get us over the rough spots. 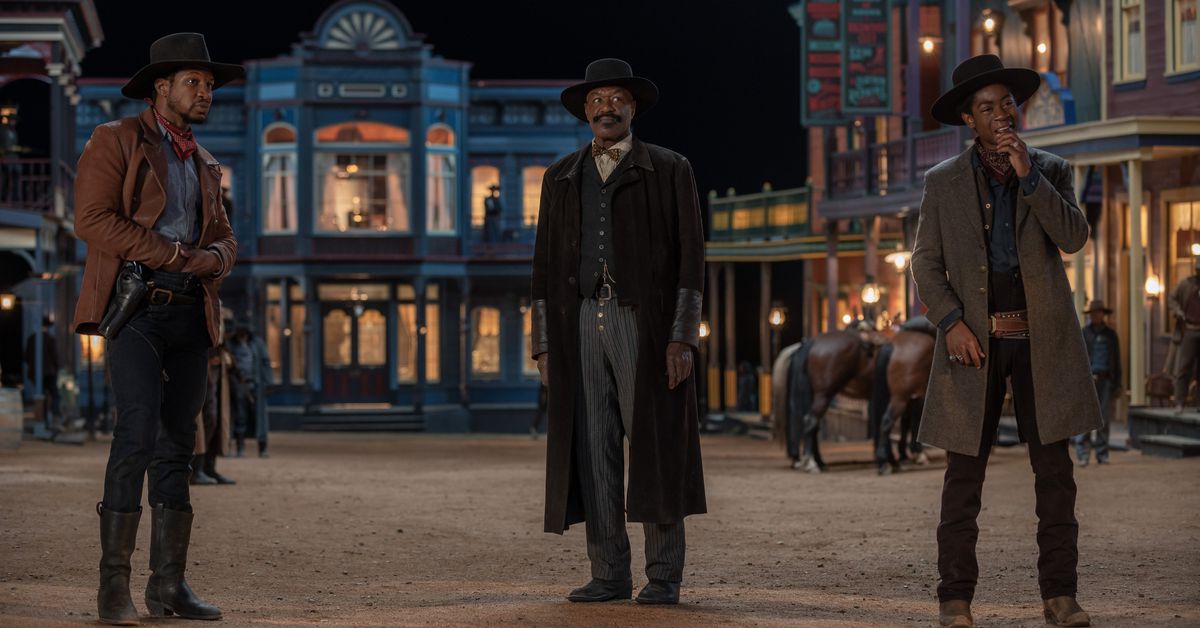 It’s unfortunate, but no amount of style and star power can paper over gaping plot holes and a lack of logic or emotional substance. Samuel is undoubtedly — and in equal parts — a fan of Quentin Tarantino and Sergio Leone, but his movie is entirely too pleased with itself to deliver the emotional and thematic weight of a Django Unchained or For a Few Dollars More.

Elba does his best to deliver a sense of tragedy to Rufus Buck, to recreate the wild-eyed melancholy of Gian Maria Volontè, who turned his villains in Leone’s first two Dollars chapters into men twisted into evil by primal needs he has no control over (unrequited love, narcotics). Elba commands the screen and does his best, but the story around him is so full of swagger and grab ass, it doesn’t stick.

It’s also too long. Just when you think we’ve arrived at the big showdown, a contrived and unnecessary bank robbery detour is introduced (primarily to ridicule whitey), and what should have been 105 minutes stretches unnecessarily into 140.

In other words, the whole of the picture is flawed. What keeps you watching, though, are the pieces. Samuel is obviously having a blast using bright colors and a bold score to paint his brand of mythology in this pretend world of his, and there’s just no question the result is several fantastic scenes filled with iconic images, buckets of blood, scintillating shootouts, terrific dialogue, and a wild-eyed girl fight.

But because it doesn’t leave you with much to chew on afterward, you’ll forget The Harder They Fall like you do any entertaining cartoon. And that’s really what the movie is, a colorful, energetic cartoon you’ll be glad to have seen once.