Venezuelan dictator Nicolás Maduro announced on Monday that he would begin a 15-day backpacking vacation with his wife and “first combatant” Cilia Flores, telling Venezuelans, “forget about me for 15 days.”

Maduro’s vacation coincides with Christmas week and the new year, typically a time of large celebrations in South America. Venezuela’s celebrations have been muted, at best, for the past two decades, as the socialist regime under Maduro and previously late dictator Hugo Chávez has ravaged the country, causing extreme poverty and one of the world’s worst migrant crises.

At Miraflores, the Venezuelan presidential palace that Maduro illegally occupies, Christmas is often a lavish affair, using up much of what is left of Venezuela’s electric supply. Venezuela’s electric grid failed once again last week, plunging 20 of the nation’s 23 states into darkness. Maduro’s regime did not offer any solutions for the problem, instead blaming unspecified enemies – presumably, the United States – for “attacking” the country.

Amid extreme food insecurity, unreliable water and electric supplies, and no functional plan to address the rising threat of the omicron variant of the Chinese coronavirus around the world, Maduro told his citizens to simply forget that he exists in a video initially posted to Chinese social media outlet TikTok.

“We’re going to catch 15 days of vacation, Cilia and I, starting on November 20,” Maduro said. “We’re taking a backpack and going around all of Venezuela. Beaches, mountains, desert, the Gran Sabana. We’re going on a bicycle, Cilia and I. Forget about me for 15 days!”

Maduro offered few details about where in Venezuela he would go or how he would do so safely, given that under his tenure the country has become one of the deadliest in Latin America.

“Venezuela has one of the highest number of violent deaths in the region and in the world. Last year closed with an estimated 16,506 murders and a rate of 60.3 violent deaths per 100,000 inhabitants, well above any other country in Latin America,” the U.S. State Department’s Overseas Security Advisory Council (OSAC) noted last year. Many of those deaths, however, it reported as “caused by resistance to the government, mostly homicides committed by state security forces by excessive use of force/extrajudicial execution” – a threat presumably not affecting the country’s dictator.

Maduro’s abrupt abandonment of his role as forced leader of the country prompted outrage online, where Venezuelans flooded his social media outlets with angry comments.

“How embarrassing,” one user wrote. “Tell this to the public administration workers, let them go on vacation with their salary and the benefits they got.”

El Nacional, one of Caracas’ oldest and most prominent newspapers, published a damning editorial on Tuesday calling Maduro’s vacation a “shameless mockery” of the Venezuelan people.

“He says he is going to take two weeks’ vacation, the last two weeks of the year, to travel the country as a backpacker. That is a shameless mockery. It cannot be called anything else,” the newspaper’s editors wrote. “First, because it is obvious that nothing that one supposes the head of the government should be solving is resolved; on the contrary, in his years of government … everything has worsened to the point of submerging the country in total crisis.” 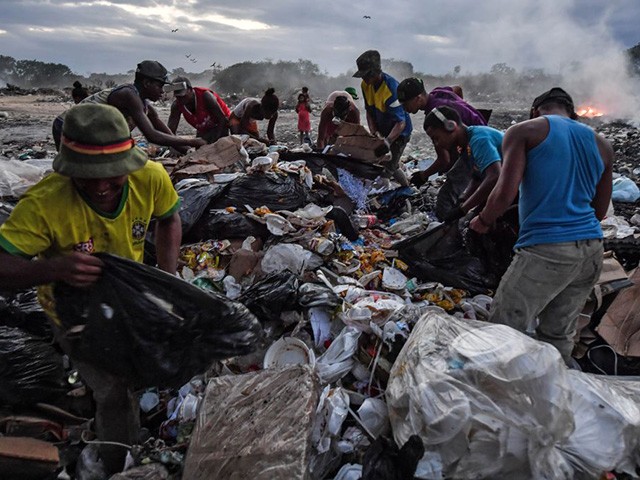 Venezuelan scavengers dig through trash at a landfill, in Pacaraima, Roraima State, Brazil, on the border with Venezuela, on February 28, 2019. (Photo credit NELSON ALMEIDA/AFP via Getty Images)

“He is going ‘on vacation’ without a solution to the electric crisis; without a trustworthy plan for covid [Chinese coronavirus] vaccine application; without saying how the gasoline problem will be solved for transportation in the country;” El Nacional listed, “without telling citizens what the plan is to restore the water supply; without clarifying the rules of the economic game to see if the country can get out of hyperinflation; without answering the thousands of mothers who have no way of feeding their children.”

Maduro has largely avoided addressing any of those problems save for blaming the United States. Everything from electrical failures to food shortages and potential famine to the lack of a functional healthcare system – all the product of socialist mismanagement of the government – Maduro has blamed on an “economic war” allegedly waged by Washington.

In reality, Washington’s humanitarian aid to Venezuela, meant to reduce the dangerous effects of socialism on the Venezuelan people, reaches into the billions between 2017 and the end of 2021. Maduro Vice President Delcy Rodríguez, in addition to not offering Venezuelans an alternative to international aid, has falsely claimed on state television that food and other necessities donated from America are “carcinogenic.”

To distract Venezuelans from their anger at his regime, Maduro has moved up the Christmas holidays further and further from the actual Christmas Day every year. This year, the “Christmas season” officially began in October with a lavish event at Miraflores to debut the year’s Christmas decorations.

“In Venezuela, we will have a happy Christmas full of lights and colors,” Maduro announced on Twitter in October.

The Maduro Christmas season began about two weeks earlier this year than in 2020, when it began on October 15.

Maduro departs for his backpacking adventure as the country reels from one of the worst blackouts in its history, resulting in no electricity in 20 of 23 states, and significant blackouts in the Caracas federal dictrict, on December 17.

“Blackouts in the country are constant, especially in the east, where there are states that spend hours without electricity on a daily basis,” El Nacional noted last week. “According to opposition and union condemnations, electrical failures are due to the lack of investment and maintenance of the electric grid.”

“Today we have been subject to a new attack on the national electric grid,” Reverol announced. “Once again, those who attacked in 2019 strike against our people.”

The major 2019 blackout affected 22 of 23 states; it was one of over 80,000 electric grid failures that year. While Reverol did not blame America last week, he referenced accusations from Maduro and his officials at the time against the United States over the blackout.

The Maduro regime has been so insistent on blaming, without providing any evidence, the United States for its failed electrical system that the subject became the plot of a newly debuted comic book cartoon titled Super Mustache, featuring Maduro as the titular hero. The first episode, released this month, showed former President Donald Trump conspiring with prominent members of the anti-Maduro Venezuelan opposition to take down the Venezuelan electric grip with an electromagnetic pulse (EMP) attack. “Super Mustache,” naturally, thwarts the plot.