“I HAVEN’T HUGGED MY MOM IN 2 YEARS!! STOP THE MANDATES,” read a sign held by a woman attending a Saturday demonstration in Vancouver, BC, in opposition to government edicts ostensibly issued for health and safety purposes related to coronavirus transmission.

A red heart sticker was pasted to the rear passenger-side window.

Thousands of demonstrators rallied in Vancouver’s downtown core to express opposition to varying restrictions of human freedom imposed across the pacific province of British Columbia.

Breitbart News journalists recorded many similar messages on posters in Vancouver, including: “CBC GLOBAL CTV LIES.” “DON’T TREAD ON ME,” “MAINSTREAM MEDIA IS THE VIRUS,” MANDATE FREEDOM,” “END MANDATES,” “TRUE NORTH STRONG & FREE,” “I’m Just Here To See You Smile,” “CANADIANS SHOULD NOT BE DIVIDED, LET’S STAND TOGETHER FOR OUR RIGHTS AND FREEDOMS,” “ATTENTION! The corporate media lies to you,” and, “LOVE OVER FEAR.” 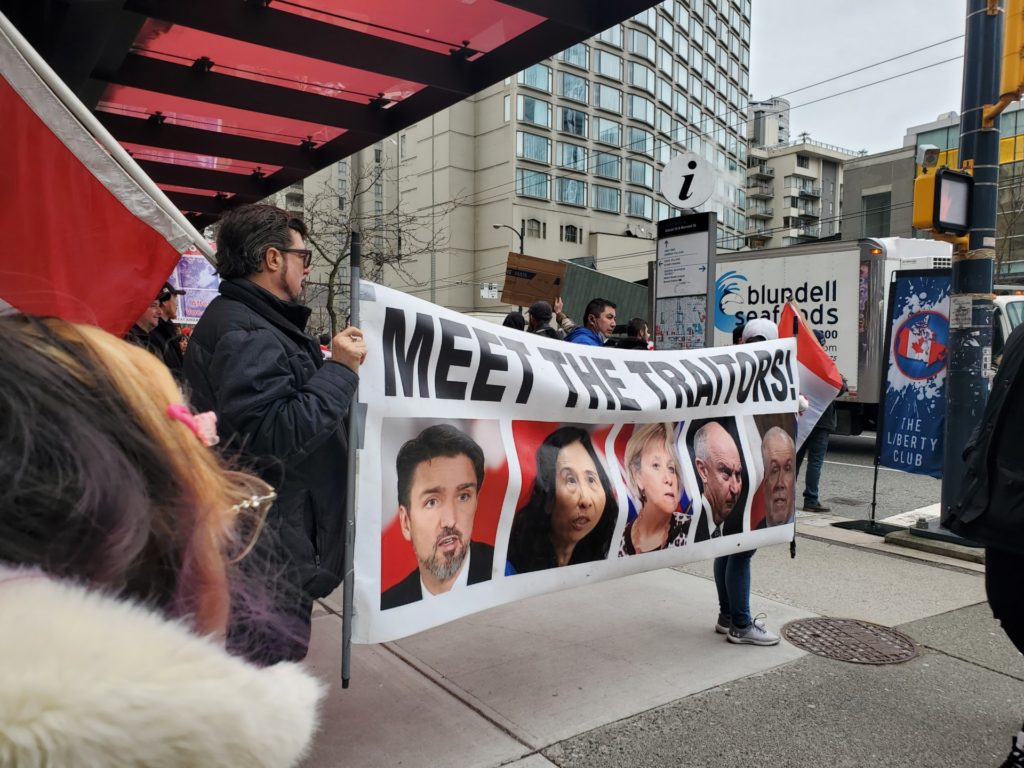 Signs of increasing anger on the streets of Vancouver (E.M./Breitbart News)

Canadian flags, red and white color motifs, and maple leaf symbols were widespread among the demonstrators. Some American flags were also seen.

A poster with a copy of the Canadian Charter of Rights and Freedoms was held up and displayed by a woman. Another woman wore a read shirt with the message, “I AM FREE CANADIAN.”

“My Family didn’t leave China for Chinada! Wake up! Canada!!! #FreedomConvoy2022 #unacceptable,” read another sign held by a woman. Vancouver is the city with Canada’s largest volume of immigrants from China and their descendants.

A significantly smaller group of counterprotesters, many wearing masks, was nearby. A masked counterprotesting woman held a sign with the message, “HONK IF YOU DON’T UNDERSTAND SCIENCE!”.