The U.S. State Department issued a travel advisory for India on Monday warning Americans to exercise “increased caution” when visiting the country in part due to a rising risk of violent crime including “rape,” the Press Trust of India (PTI) reported Wednesday.

“Indian authorities report rape is one of the fastest growing crimes in India. Violent crime, such as sexual assault, has occurred at tourist sites and in other locations,” the U.S. State Department wrote in a notice dated November 15.

The State Department published the bulletin to announce it had increased its alert system for India to a “level 2,” which advises travelers to “exercise increased caution.” A nation with a “level 1” State Department status indicates visitors may “exercise normal precautions” while in the country.

“This is not the first time that the US has highlighted sexual assault as a concern in its travel advisories for India,” the Print, an Indian online newspaper, noted on November 17. “It was highlighted earlier in 2018 and 2019, when the US had asked women travellers to exercise caution.”

A domestic Indian tourist was gang-raped by a group of men in February 2020 shortly after visiting a Himalayan mountain village in northern India’s Uttarakhand state. The 24-year-old woman was departing a local tourist attraction in Ramgarh district when a group of four men began to follow her. The young woman was not alone at the time of the incident, as she was accompanied by her uncle.

The group of strange men physically attacked the woman’s uncle and tied him to a tree. 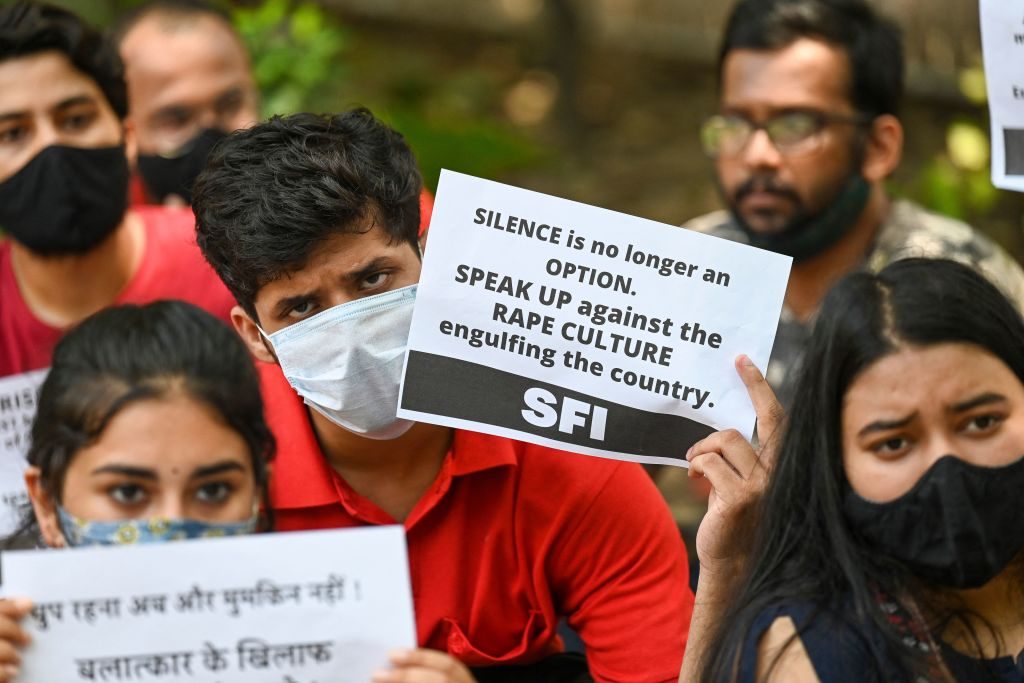 Activists of Student Federation of India (SFI) hold placards during a protest against the alleged rape and murder of a nine-year-old girl, in New Delhi on August 4, 2021. (PRAKASH SINGH/AFP via Getty Images)

The assailants then dragged the woman to a nearby forest where they took turns raping her, Ramgarh Superintendent of Police Prabhat Kumar told reporters at a press conference shortly after the crime.

A British female tourist was raped in the southwestern Indian state of Goa in December 2018 while “walking back to her hotel,” CNN reported.

“He took her into the fields and raped her and then he took her bags with him,” Rajendra Dessai, a police officer at the Canacona police station in southern Goa, told the news outlet at the time, referring to the unidentified assailant.

Goa is known both within India and worldwide for its luxurious Arabian Sea coastline. The state’s lush beaches attract hundreds of thousands of tourists to Goa each year. Unfortunately, the state also documents a high number of tourist rapes. 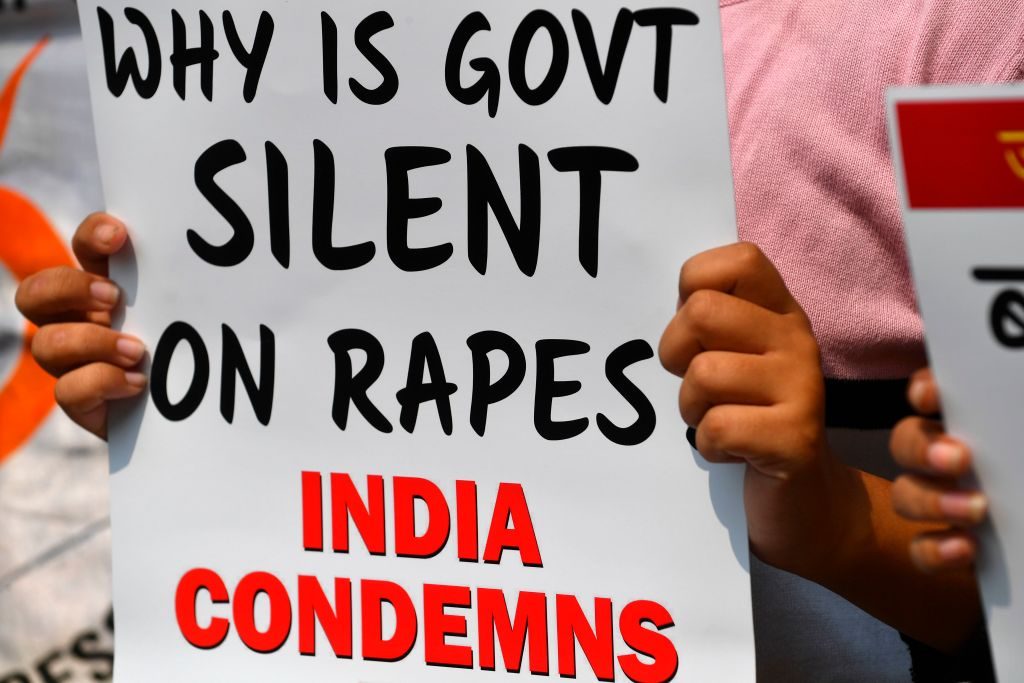 A political activist holds a placard during a protest to condemn the alleged gang-rape and murder of a teenaged woman in Bool Garhi village at Hathras in Uttar Pradesh state, on the eve of International Day of the Girl Child in Mumbai on October 10, 2020. ( INDRANIL MUKHERJEE/AFP via Getty)

“Goa’s reputation has been repeatedly marred by incidents of sexual assault,” CNN noted in December 2018.

“Last year [in 2017], another British national was raped and killed near Deobagh Beach in Canacona,” the news outlet recalled.

“In 2008, British teenager Scarlett Keeling was raped and murdered in Goa. Two men charged with committing the crime were acquitted in 2016,” CNN noted.