Priyanka Sohoni, the second secretary of the Indian Embassy in Beijing, had just begun speaking at the U.N. Global Sustainable Transport Conference on October 16 when her microphone suffered a mysterious malfunction that temporarily muted her speech. Sohoni had been voicing New Delhi’s opposition to Beijing’s BRI projects in foreign countries when her microphone stopped working. Moments later, an introductory video for the next scheduled speaker began to play on a screen behind Sohoni, further interrupting her time on the conference stage.

“We are confronting some technical problems and played the video of the next speaker. I am sorry for that and asked Sohoni to resume her speech,” the summit’s co-chair, U.N. Under-Secretary-General for Economic and Social Affairs Liu Zhenmin — who also previously served as China’s foreign minister — announced shortly afterward.

“You are lucky … You are back and welcome back,” Liu told Sohoni before allowing the diplomat to resume her speech.

Without missing a beat, Sohoni launched back into her unforgiving analysis of China’s BRI scheme.

“We share the international community’s desire for enhancing physical connectivity and believe it should bring greater economic benefits to all in an equitable and balanced manner,” the envoy said.

“Expansion and strengthening of physical connectivity is an integral part of India’s economic and diplomatic initiatives,” she continued.

“There have been some references to the Belt and Road Initiative or BRI at this conference. Here, I wish to say that as far as China’s BRI is concerned, we are uniquely affected by it,” the official noted. 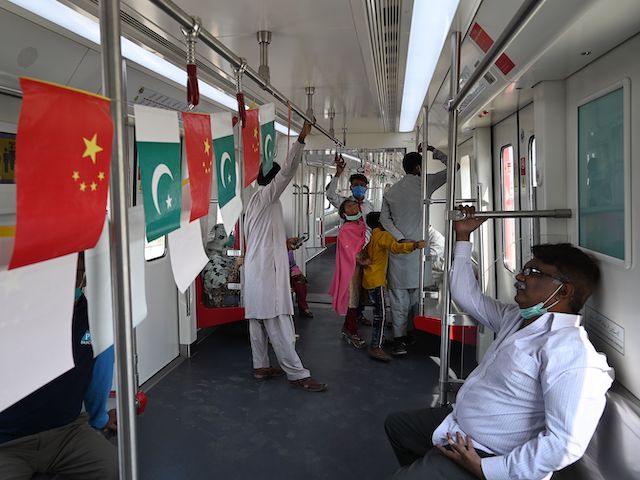 Passengers ride in a newly built Orange Line Metro Train (OLMT), a metro project planned under the China-Pakistan Economic Corridor (CPEC), a day after an official opening in the eastern city of Lahore on October 26, 2020. (Arif Ali/AFP via Getty Images)

“They must follow principles of openness, transparency, and financial responsibility and be pursued in a manner that respects sovereignty, equality, and territorial integrity of nations,” Sohoni stated.

China’s BRI ostensibly allows China to support infrastructure expansion in developing nations worldwide. The projects are often based on dubious loan structures, however, that imprison host countries inside of a Beijing-controlled debt trap.

In Pakistan, China has embarked upon an ambitious and yet unfinished BRI endeavor known as CPEC. The $60 billion project centers upon Pakistan’s mineral-rich Balochistan province, which strategically borders Iran, Afghanistan, and the Arabian Sea. One of CPEC’s objectives is to link Balochistan with China’s westernmost Xinjiang province, which also borders Afghanistan.

“India has been vocally objecting to China over the CPEC as it is being laid through the Pakistan Occupied Kashmir (PoK),” PTI noted on October 20. 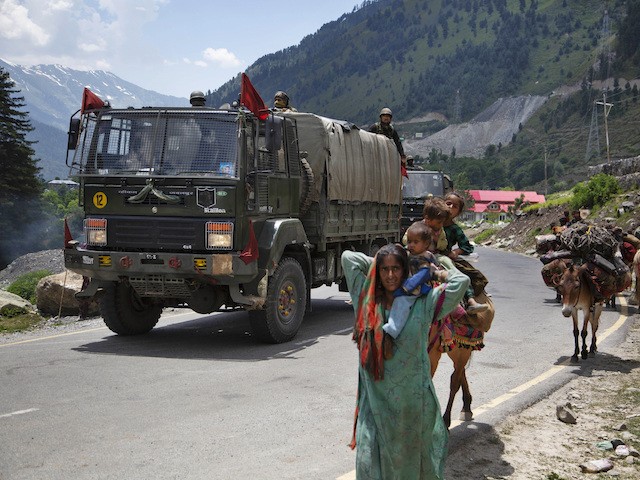 Islamabad, in May 2020, signed a $5.8 billion contract with Beijing to construct the Diamer-Bhasha Dam in Gilgit-Baltistan, which is located in the disputed PoK. The venture forms part of the greater CPEC initiative.

India’s Ministry of External Affairs responded to the proposed dam construction on May 14, 2020, stating:

Our position is consistent and clear that entire territory of the [Indian] Union Territories of Jammu and Kashmir and Ladakh have been, are, and will continue to be integral and inalienable part[s] of India. We have consistently conveyed our protests and shared concerns with both Pakistan and China on all such projects in the Indian territories under Pakistan’s illegal occupation.

International law bars China from building any new structures in the PoK, which is officially administered by the Indian state. The U.N. formally acknowledges the territory as Indian land.