'The Many Saints of Newark' Review: A Total Bada Bust

And why not? In the 14 years since the HBO show ended, it’s only grown in stature, which meant the pump was as primed as it would ever be for more Sopranos. Sure, we’ll miss the old crew, but that doesn’t mean Chase can’t recreate the magic with a new one.

Well, I don’t know what to say other than the movie’s terrible. Just terrible. Awful. A crushing disappointment. And that’s the fault of David Chase, who produced and co-wrote this dog.

For the life of me, I can’t tell you what the Many Saints of New York is about. We were told it was about how Tony Soprano became Tony Soprano. Well, sometimes the movie is about that, but never convincingly — nothing close to convincingly. And a big part of the problem is the decision to cast Michael Gandolfini, the real-life 20-year-old son of the late James Gandolfini, as young Tony. 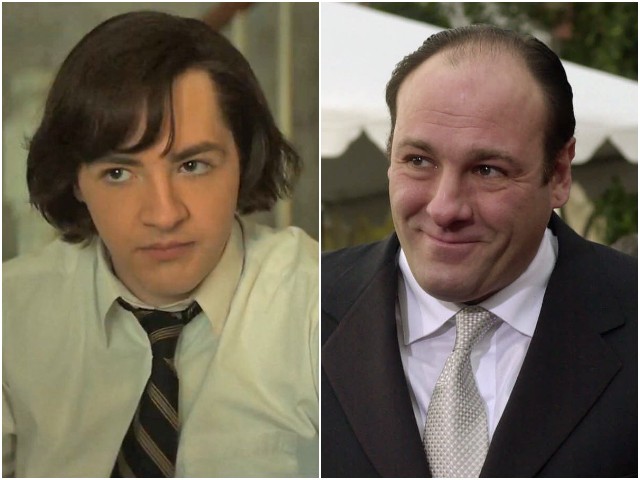 Michael Gandolfini is a young Tony Soprano in “The Many Saints of Newark.” Actor James Gandolfini of television’s “The Sopranos,” arrives for the 7th annual Screen Actors Guild Awards in 2001. Warner Bros./AP Photo/Kevork Djansezian

I’m sorry, but Michael has none of his father’s charisma or pathos and definitely none of the simmering menace his father carried around like a grenade with its pin already pulled. Never for a moment did I believe this kid would grow up to be the somber and morose bull that was Tony Soprano.

For the most part, though, the movie’s not about young Tony, at least not until it awkwardly tries to shoehorn that into the final half-hour. For reasons that are never made clear, most of the film has us cruising around with Dickie Moltisanti (Alessandro Nivola), father to Christopher Moltisanti, Tony’s junkie nephew in the series. Why him? I have no idea. Other than a single episode, it’s not like Dickie loomed large over the series, and in Many Saints, he’s too generic and bland to be the lead character. Worse still, he only does stuff. He’s not a protagonist looking to achieve something. He has no goals. There’s nothing he’s striving for. This happens. Then that happens. What’s the point of this guy? Why should we be invested in him? What does he want?

Oh, and sometimes the movie’s about race, but for no particular reason other than being about race is fashionable these days. Leslie Odom Jr. (who at least brings some much-needed charisma to his scenes) plays Harold McBrayer, a black man who works for Dickie, and then has a bizarre racial awakening by way of slam poetry. He then decides to run numbers, which puts him in direct competition with Dickie.

Oh, and Harold also competes with Dickie in another way that makes ZERO sense and ends with the stupidest and most illogical murder in the history of mob movies.

Many Saints even fails with what should be the easy stuff. After seven seasons, you’d think Chase’s grasp of Tony and his mother Livia (Vera Farmiga) would be such a part of his storytelling DNA those scenes would sing. Well, they don’t. For one thing, Farmiga doesn’t remind you of Nancy Marchand’s Livia. Instead, she’s channeling Edie Falco’s Carmela, Tony’s future wife.

Tony marrying his mother might make sense in a Freudian way if we were unfamiliar with Marchand’s towering portrayal in the series or if we hadn’t already met a young Livia in the series’ flashbacks. It’s a bonkers choice, and I doubt it was Farmiga’s idea.

In this same vein, one of the movie’s worst scenes involves young Livia and Tony. They’re in the kitchen. Livia makes her son a burger. She’s in a good mood; all dolled up for a night out. Tony says something. She takes it the wrong way. The moment is poisoned. We expect this, but it’s staged and written so poorly, it’s embarrassing to watch. It sure doesn’t help that an awkward and laughably unrealistic subplot about Tony’s sudden interest in anti-depressants is introduced.

In the series, moments like these were handled so effortlessly it made them a pleasure to watch. What should be a pleasant and ordinary family moment always soured into something bitter and tense. These scenes never felt forced because they said so much about how Tony’s family (and Family) were never happy, never satisfied, always grasping; someone always had to shit all over everything by asking for a favor or taking a dig at someone else or polishing a grudge.

Nothing in Many Saints works. Nothing feels like the Sopranos. The actors are wasted, and on top of being under-cooked, the screenplay is choppy and episodic. Why is Ray Liotta playing twins? Why is dead Christopher doing the voiceover?  Why is the cigarette smoke CGI’d? Where’s the humor? Do we all owe an apology to Carlito’s Way: Rise to Power?