The Czech village of Poniklá has produced Christmas ornaments made by hand from blown-glass beads since the early 20th century.

The practice continues to thrive today after surviving decades of communism that nationalized the Czech glass-making industry from about 1948-1989 and earned a triumphant spot on the UNESCO list of intangible cultural heritage in 2020.

Blown-glass bead technology traveled from the city of Jablonec nad Nisou in the Czech Republic’s northern Bohemia region to Poniklá in the mid-19th century, where it soon evolved into a unique and enduring art form.

“The beads are … produced by blowing a previously heated glass tube inserted in a brass mold,” UNESCO wrote in December 2020 when inscribing Poniklá’s blown-glass technique onto its list of intangible cultural heritage.

“The tubes are shaped into a string of beads which are called ‘klautschata,'” according to UNESCO, which stands for the United Nations Educational, Scientific, and Cultural Organization.

Craftsmen then silver, color, or decorate the glass tubes before cutting them by hand into shorter pieces or individual beads. Artisans thread these glass pieces onto wires that may be bent and joined together, allowing for the creation of various forms and shapes, such as stars and snowflakes.

The Rautis factory is currently the only remaining site in Poniklá that produces the town’s glass beads according to traditional methods. Founded in 1902 by Stanislav Horna, the company has stood many tests over time, including a successful poaching scheme in the 1920s by Japanese spies who posed as tourists to steal Rautis’s glass-blowing technique.

“The company managed to stay afloat even after [the] act of espionage forced it to redirect its focus to Christmas ornaments,” Agence France-Press (AFP) reported on December 16.

“In the 1920s, a group of Japanese industrial spies disguised as tourists copied the process and started to produce the trimmings, taking the eastern markets away,” Marek Kulhavy, the current owner of the Rautis factory, told AFP.

“The warehouses were full of beads and somebody decided to start making Christmas decorations as Christmas trees were a hit at the time,” he explained.

Production at Rautis factory tapered off starting in 1948 when all glass factories in the country “were nationalised as the Communists took power in the former Czechoslovakia,” AFP recalled on December 16, noting that “Horna’s son was even thrown into prison like many entrepreneurs.”

“After 1948, the production in Poniklá was integrated into the Glass Jewelery and Železnobrodský sklo [glass] operations, where it was a marginal branch,” according to the Rautis company website. A non-Communist government emerged in Czechoslovakia in 1989, allowing the Rautis factory to re-privatize and resume glass bead, or “pearl,” manufacturing at full capacity. 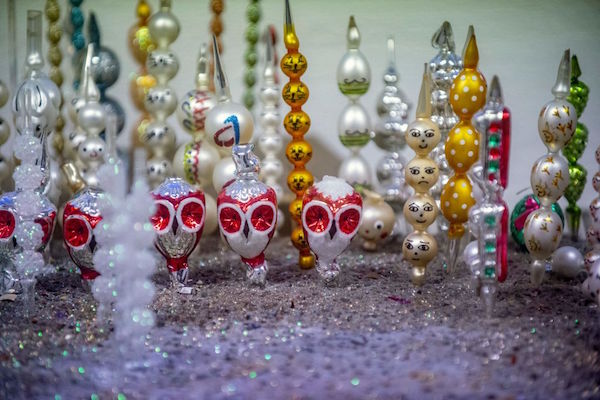 Newly painted Christmas tree decorations made of from blown glass beads are displayed on December 14, 2021, in a small family factory in Ponikla village, North Bohemia in the Czech Republic. (MICHAL CIZEK/AFP via Getty Images)

“Glass beads were always on the fringe (of glass production) and they lived their own life even during Communism as nobody was really interested in them and so the business survived,” Kulhavy told AFP on December 16.

“The production is specialized and technically demanding, and its practice requires a high proportion of manual work,” according to the organization.

“The production process has not changed much during the past hundred years,” UNESCO observed. “Only the burners are now gas-fired and instead of bellows there are air-blowers.” 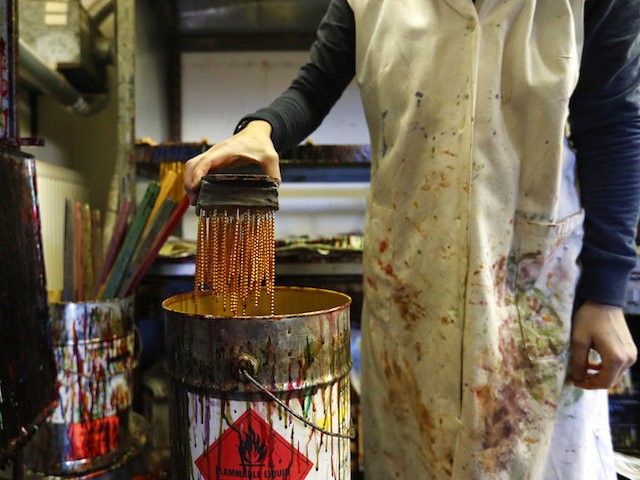 “But bead blowing depends, as by the past, on the skills and experience of the blower rather than on advanced technology; the decorations are solely made by hand,” the U.N. agency acknowledged.