Family members of January 6 protesters who are or have been incarcerated at the Washington, DC, jail shared disturbing accounts of alleged mistreatment by authorities during Saturday’s “Justice for J6” rally.

“Last night for dinner, they were served four pieces of white bread, a cookie, and a packet of tartar sauce,” claimed a woman who went by “Kelly.”

Kelly is reportedly the girlfriend of Jonathan Mellis, who was among the protesters who entered the Capitol building on January 6. She claimed Mellis, who has been in jail for months, is being held in solitary confinement.

“I think America needs to become very well versed in the treatment of these men. It’s human rights that we are talking about, and it’s completely non-partisan,” she said, speaking to a crowd of a few hundred people.

Kelly went on to read a letter written by a mother of a jailed protester. According to Kelly, the woman’s son allegedly “shares a wall” with her boyfriend in jail and is “subject to the same torture.” The woman reportedly sent the letter anonymously to the rally’s organizer Matt Braynard due to fear of retaliation.

“I just got off the phone after speaking to my son. He’s a January 6 detainee in the gulag of D.C. Over the months, I have heard of the horrors these U.S. citizens and veterans are being subjected to,” the letter allegedly reads, according to Kelly. 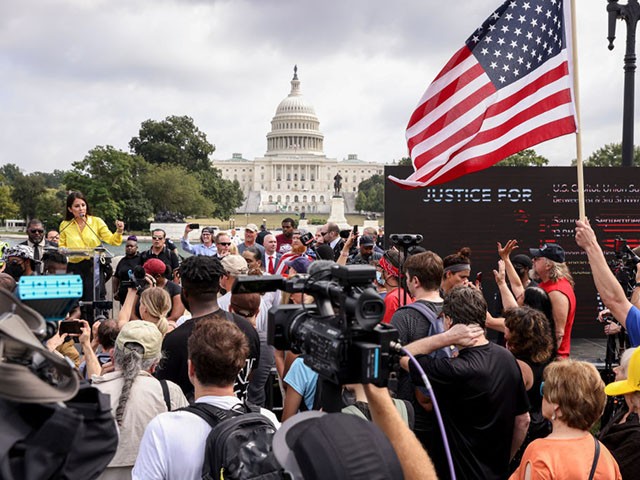 “Today I have found out some more indignities forced upon them. He told me he’s not allowed to shave or cut his hair. It’s been seven months now with no shave or haircut,” she further claimed in the letter.

The anonymous woman also claimed her son, who is a veteran, has not been able to meet with his veteran representative in months, which he is supposed to do weekly.

“He’s lost his job, lost friends, family and is in the process of losing his home. He’s denied visits from family. His jailers treat these men like scum. There’s absolutely no presumption of innocence,” she claimed.

Arizona congressional candidate Jeff Zink also spoke at the rally. He and his son, Ryan Zink, were at the Capitol on January 6 when the protest got out of control. Zink claimed his son only filmed the protesters and was not a part of the chaos, though he is facing charges of physical assault, trespassing, and damage to a federal building.

Zink said his son was incarcerated at the D.C. jail for six weeks before he secured an attorney and was released.

“So he is out of the prison, but what he told me that happened inside there was the fact that they had cells with black mold on the corners, that he was not allowed to see his attorney or his family members,” Zink claimed. “He went as many days as five without shaving or showering.”

Saturday’s rally attendees are not the first people to allege horrific conditions at the D.C. jail. In April, the Washington Post exposed the jail’s draconian Chinese coronavirus protocol. For almost 400 days straight, 1,500 people at the D.C. jail were reportedly locked in their cells for 23 hours a day to prevent the spread of the virus. 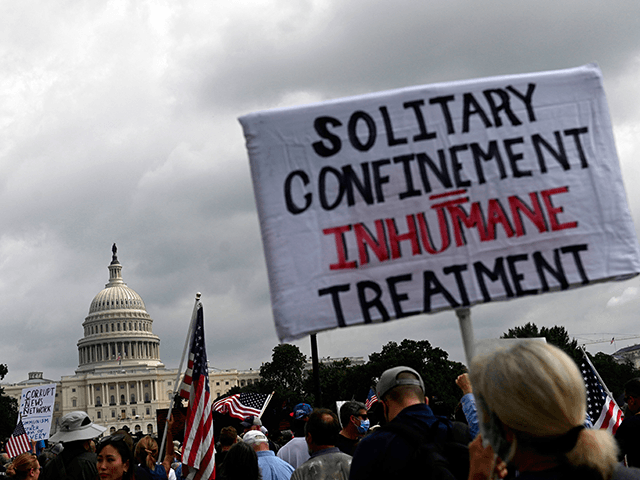 Demonstrators gather for the “Justice for J6” rally in Washington, DC, on September 18, 2021, in support of the pro-Trump rioters who ransacked the US Capitol on January 6, 2021. – Washington was on high alert for the rally with security forces better prepared to avoid a repeat of the January attack on the Capitol. US Capitol police said they have no indication of a specific plot associated with the rally, but warned in a news conference there had been “some threats of violence,” with a counter-rally scheduled to take place nearby. (Photo by Andrew CABALLERO-REYNOLDS / AFP) (Photo by ANDREW CABALLERO-REYNOLDS/AFP via Getty Images)

Many of the men and women stuck at the jail have not yet been found guilty of the crimes for which they were arrested, according to the report, They were also allegedly denied access to basic services such as grooming, exercise, visitation, medical care, and more. By June, inmates were reportedly to be released for at least 5 1/2 hours a day, “which mirrors pre-pandemic levels,” the Postreported.

Despite reports of potential violence and beefed up security, including the National Guard and fencing, Saturday’s “Justice for J6” rally attracted a few hundred demonstrators and ended without major incidence.

Photos and video taken around the Capitol show media and police, many heavily armed and in riot gear, vastly outnumbered protesters, who were gathered in support of defendants detained in connection with the January 6 Capitol attack.

“It is times like these that good men and women have got to start standing up,” Zink said in closing to the crowd. “This government wants to keep us silent. They want us out of the way. I will not be one of those that is going to be silent. I am not going to be afraid. I will not bow down.”