Several establishment media companies have filed a motion to join former White House aide Stephen K. Bannon in his legal fight against the Department of Justice (DOJ), which is trying to prevent him from releasing documents about the January 6 Capitol riot.

Ironically, the DOJ is trying to suppress documents while prosecuting Bannon for contempt of Congress, a misdemeanor, after he refused to provide documents to the Democrat-dominated U.S. House committee investigating the riot.

Bannon’s lawyers sought and obtained over 1,000 pages documents from the DOJ that could be necessary to his defense. But the DOJ wants to stop him from releasing them, claiming that he only wants to do so “to make extrajudicial arguments about the merits of the case pending against him and the validity of the government’s decision to seek an indictment.”

In response, according to the UK Daily Mail, a consortium of media organizations has filed a motion to intervene in the case — that is, to join as a litigant — and to stop the court from suppressing “more than 1,000 pages of witness testimony, grand jury material, and even emails from staff for the House Jan. 6th Committee investigating the Capitol riot” from public view. The media group argues that the DOJ’s proposed court order violates the First Amendment. 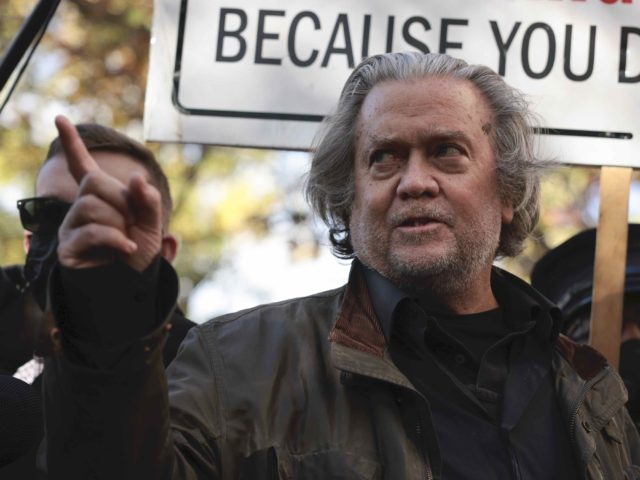 WASHINGTON, DC – NOVEMBER 15: Former Trump Administration White House advisor Steve Bannon and his lawyer David Schoen speak to reporters outside of the E. Barrett Prettyman Federal District Court House on November 15, 2021 in Washington, DC. Bannon is charged with two counts of contempt due to his refusal to appear for a deposition and for his refusal to produce documents, despite a subpoena from the House Select Committee to Investigate the January 6 Attack on the U.S. Capitol. (Photo by Anna Moneymaker/Getty Images)

The Daily Mail notes wryly: “The filing puts the mainstream press squarely on the side of Bannon, who has in the past … attacked the media as the ‘opposition party’.”

Bannon is the only person prosecuted by the DOJ in recent years for contempt of Congress. The DOJ declined to prosecute disgraced IRS official Lois Lerner, who targeted conservative groups; as well as former Attorney General Eric Holder, who withheld documents related to the Obama administration’s Operation Fast and Furious, which led to the death of U.S. Border Patrol Agent Brian Terry.

After his arrest, Bannon, a former executive chairman of Breitbart News, promised that he would go on the offensive against the DOJ over his prosecution, vowing to make it the “misdemeanor from hell.”

Attorney General Merrick Garland was confirmed amid promises, both by himself and President Joe Biden, that he would not let the Department of Justice (DOJ) become politicized.

In his February confirmation hearing, he said: “The department … if I am confirmed, will be under my protection for the purpose of preventing any kind of partisan or other improper motive in making any kind of investigation or prosecution. That’s my vow; that’s the only reason I’m willing to do this job.”

Since then, Garland has sued Republican-governed states over ballot integrity laws; called on federal law enforcement to monitor parents who spoke out at school board meetings, after the National School Board Association collaborated with the White House on a letter to him; and indicted Bannon after Biden himself pressured the DOJ to prosecute.

It is unlawful to defy a legitimate subpoena under ordinary circumstances. But Bannon’s lawyers have argued that what the United States House Select Committee on the January 6 Attack is seeking is covered by executive privilege, and that he cannot comply without further judicial determinations.

The committee ignored the judicial process and voted to hold Bannon in contempt anyway — just as the House impeached Trump, the first time, for the “high crime” of defending the prerogatives of the executive branch in the courts.