Albertsons reportedly told analysts on Monday the grocer expects to raise prices on food items – another indicator that inflation has dramatically increased during Joe Biden’s presidency.

“On any given day, something is out of stock,” the Wall Street Journal reported Chief Executive Officer Vivek Sankaran’s comments about the grocer passing through the costs increases to American workers and families.

Sankaran also reportedly said consumers’ demand for groceries is still quite strong due to families eating at home more often to save money. “We have not seen material change in customer behavior.” 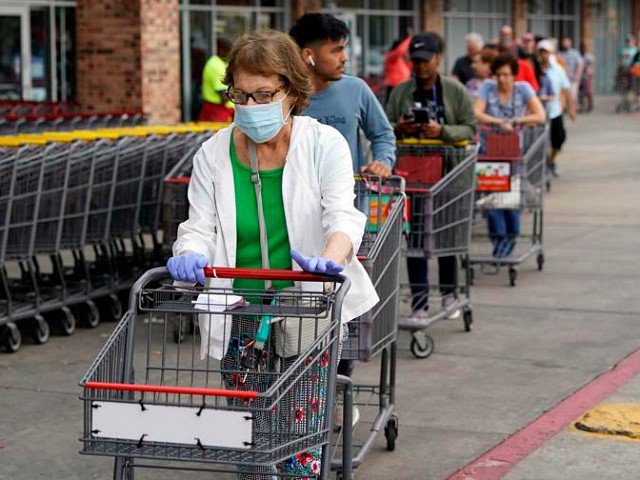 Ruth Flavelle wears a mask and gloves as she enters an H-E-B grocery after waiting in line with more than 150 people Tuesday, March 17, 2020, in Spring, Texas. (AP Photo/David J. Phillip)

Other supermarket chains are also having a difficult time stocking shelves, the Journal reported, due to receiving unfulfilled deliveries from suppliers. The lack of supply of food has many grocers “sometimes sending their own trucks to grab goods from manufacturing plants.”

WJXT, a Florida-based news station, confirmed other grocery store chains are experiencing a lack of stocked food. “In Target, fruit snacks were limited, protein bars were nearly gone too, and Lunchables were low in stock,” the outlet wrote. “We saw the least amount of available frozen foods at Publix and snack foods like beef jerky were running low.” 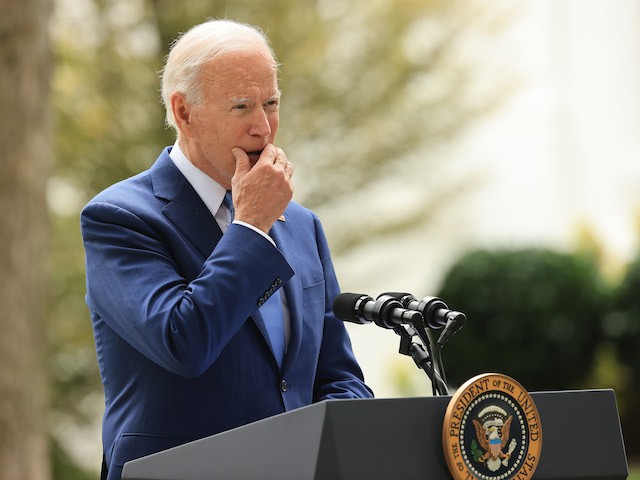 President Joe Biden announces that he expanded the areas of three national monuments at the White House on October 08, 2021 in Washington, DC. (Chip Somodevilla/Getty Images)

The Journalreported October 4 that President Biden’s supply chain crisis has caused an increase in inflation. The Labor Department estimated American workers and families are paying 5.4 percent higher prices than they were in 2020.

President Biden in March passed a $5 trillion coronavirus stimulus package, which flooded the economy with money and impacted the labor supply with additional amounts of unemployment benefits. The package likely produced a labor shortage, exasperating the cost of goods.

In an aerial view, container ships are anchored by the ports of Long Beach and Los Angeles as they wait to offload on September 20, 2021 near Los Angeles, California. (Photo by Mario Tama/Getty Images)

The increase in prices is estimated to raise the cost of living for an average American by $175 a month, according to a Moody’s economist. “For households earning the US median annual income of about $70,000, the current inflation rate has forced them to spend another $175 a month on food, fuel and housing,” the New York Post reported.