As many as ten soldiers in the North Korean military force, the Korean People’s Army, allegedly “confronted their superiors” in a “violent” manner over the last three months of 2021, Radio Free Asia (RFA) reported on Tuesday citing the account of an unnamed North Korean military official.

“In the last three months of 2021, as many as 10 soldiers have violently confronted their superiors nationwide,” a Korean People’s Army official from North Korea’s northeastern province of North Hamgyong told RFA on December 20, 2021.

“At the end of November, a company-level officer of the 45th Division under the 9th Corps asked several times to his superior battalion to let him help solve a family issue and take care of his own personal health issue, but when he was ignored, he confronted his superior with a weapon while he was drunk,” the anonymous North Korean army source told the news service.

The source further alleged that a company-level officer in the Korean People’s Army attempted suicide sometime in December after a supervisor denied his request for assistance with an undisclosed personal problem.

“Even earlier this month, in a unit under the 3rd Corps, a company-level officer had a personal problem and appealed to a superior to help solve it,” the anonymous North Korean military told RFA on December 20.

“But when the senior officer ignored it, the company-level officer attempted to kill himself with a communication cable around his neck,” he claimed.

The alleged confrontations have provoked concern among North Korean military leaders who “fear” the phenomenon may lead to “a rising trend of insubordination within the military,” according to RFA, a U.S. government-funded broadcaster.

RFA said its North Korean military “sources” blamed the recent spate of disputes between soldiers and officers of the Korean People’s Army on “stresses presented by a worsening North Korean economy due in part to COVID [Chinese coronavirus] restrictions that have largely shut off trade with China.”

The Korean People’s Army is fairly representative of the greater North Korean population, as Pyongyang requires every able-bodied man in North Korea to join the nation’s armed forces for a minimum of seven years. Though long-stifled by Pyongyang’s ruling Communist regime, the North Korean population has suffered an increase in hardship over the past two years since its leader, Kim Jong-un, ordered his country’s border with China to close in January 2020 in response to the then-emerging Chinese coronavirus. 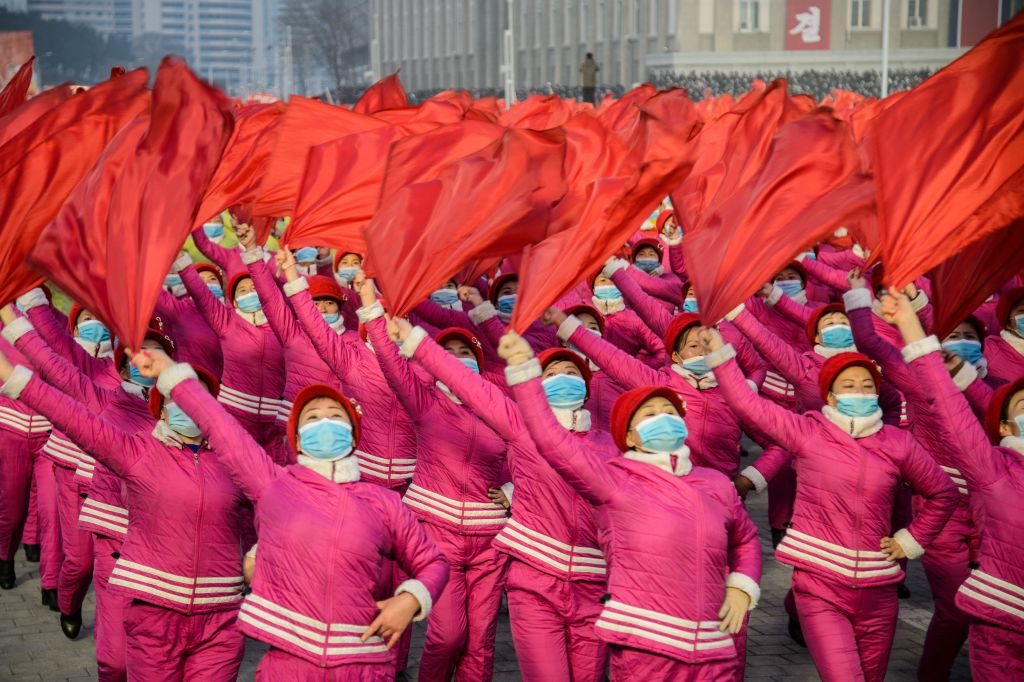 In this picture taken on January 5, 2022, people take part in a demonstration march after the Pyongyang City rally to carry out the decision of the 4th Plenary Meeting of the 8th Central Committee of the Workers’ Party of Korea, at Kim Il Sung Square in Pyongyang. (KIM WON JIN/AFP via Getty)

The action ushered in an ongoing economic crisis that has pushed the nation to the brink of starvation.

North Korea’s economy contracted by 4.5 percent in 2020 in direct response to its border shutdown with China, which is traditionally Pyongyang’s top trading ally.

“This marks North Korea’s steepest economic decline since the days of massive famine in the 1990s,” the Brookings Institution observed in November 2021.