Pollak: No Matter Who Wins California Recall, Los Angeles Times Is the Loser

The Los Angeles Times reported Saturday that conservatives have pointed out the double standard in the media’s response to a violent racist attack on Larry Elder (R), the leading rival to Gov. Gavin Newsom (D) in the Sept. 14 recall.

The Timesnoted that “conservatives have jumped in” with “accusations of a double standard” after Elder was hit in the head with an egg by a white woman wearing a gorilla mask on Wednesday — an attack that certainly would have been interpreted as racist had Elder been a Democrat.

Not surprisingly, the Times failed to tell readers that the Times itself was a primary offender, attempting last week to portray Elder and his campaign as the aggressors, rather than the victims.

In a tweet, the Times showed Elder with his hands near a white woman’s face, as if striking her. The linked article described the attack as follows: “LAPD is investigating altercation involving Larry Elder at Venice homeless encampment.” 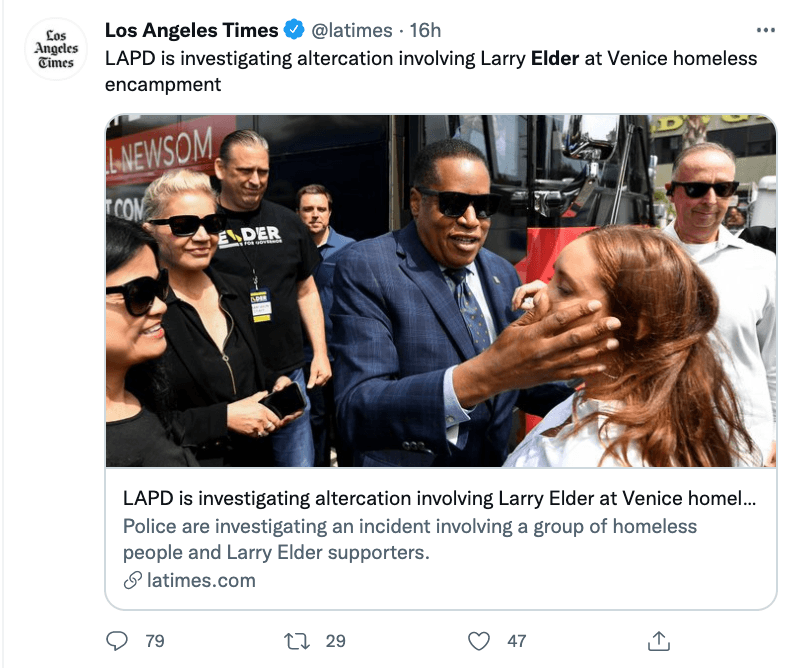 It was only the latest effort by the Times to appeal to racism and racial stereotypes in its coverage of the recall campaign, in what has been a single-minded effort to discredit Elder in the ugliest personal terms because he is a black conservative.

Last week, the Times questioned Elder’s ties to the local black community, though he was born and raised in South Central L.A. For several weeks, it has run incendiary columns that claimed “Larry Elder is the Black face of white supremacy. You’ve been warned” and that he is responsible for propagating white supremacy via “David Duke talking point[s].”

Breaking: Larry Elder’s onetime fiancee says she she filed a report with the LAPD Wednesday over an incident six years ago in which she said Elder checked to see whether his gun was loaded during an argument about the couple’s breakup https://t.co/28G43qvGZa

The Times also gave serious coverage to unsubstantiated claims by Larry Elder’s former fiancée — now backing a political rival — that he had shown her a gun in 2015. L.A. prosecutors declined to pursue her claims because they were so outdated. (Notably, Datig later admitted that the two of them had not even been arguing during the alleged incident with the gun.) The claims had all the makings of crude 19th century racist propaganda — a black male aggressor, a fearful white woman.

On Sunday, a Times columnist told CNN’s Reliable Sources [sic] that Elder has a “white supremacist worldview,” and is therefore a “real threat to communities of color.” She claimed that Elder — an accomplished attorney, author, and broadcaster — drew his views from an obscure white thinker, as if he were incapable of thinking for himself. (She also falsely claimed that Elder “refuses” to talk to nonpartisan outlets; he spoke to the Times but wisely refused to speak to her.)

Polls heading into Election Day suggest that Newsom will survive the recall effort. If he does, it will in part be because of sensational racial attacks like those in the Times, which were repeated at a Newsom campaign event — without comment, much less condemnation, from the governor. Add this episode to the Times‘ self-described history of racist news coverage.