If you were Joe Biden and you’d had a year like he’s had, you, too, would be looking for a scapegoat. That is, someone other than yourself to blame.

After all, your approval rating is averaging in the low 40s, and one poll found that a full 70 percent of Americans don’t want you to run for a second term. In the meantime, inflation is up, national confidence is down, and your own loose tongue has quite possibly invited the Russians to start a war against Ukraine. Given that record of failure, what are you going to do?

The reliable Washington, DC, answer is to find that scapegoat and send it off into the wilderness. (In DC terms, that typically means becoming a lobbyist, which is lucrative, but not glamorous.) Whether he knows it or not, that’s the solution Biden, a Beltway lifer, is moving toward.

Fortunately for the 46th president, there’s a good scapegoat right down the hall from the Oval Office: his White House Chief of Staff Ron Klain.

On January 21, Politico, which makes a specialty of reporting on behind-the-scenes skullduggery, bannered the headline, “It’s Ron Klain’s turn in the barrel: Biden’s chief of staff started strong and earned plaudits. But, increasingly, he’s under scrutiny for the state of the presidency.” As the article put it:

For months, moderate Democrats in Congress have complained that Klain is overly deferential to their liberal colleagues, to the point where some members and Hill staff privately said he needed to be replaced.

The article including a scorching quote from a “House Democratic lawmaker,” who, as they say in hit-journalism, “spoke candidly about Klain on condition of anonymity.” Quoth the unnamed Dem:

The president was elected because we all thought he was going to be good at governing.  He was going to govern from the center, he was going to work with Republicans. And to have a chief of staff that apparently has decided that he’s going to be Bernie Sanders, I think that’s confusing. It’s just not helpful.

We can marvel over those words: “to have a chief of staff that apparently has decided that he’s going to be Bernie Sanders.” Ouch!

Bernie Sanders, the independent senator from Vermont, is a powerful force on the left, and yet thanks to his cranky personality, as well as his hard-line ideology, most regular Democrats dislike him. That’s why he lost both times that he ran for the Democratic nomination, in 2016 and in 2020. Indeed, Sanders is so out there that he refuses to even call himself a Democrat; he merely deigns to caucus with them when he’s in the U.S. Senate.

So for a House Democrat to compare Klain to Sanders, is well, a real shot at Klain. And a signal to Biden: Hey Joe, if you want to hope to be a successful president, let alone get re-elected, you’re going to have to lay off the Sanders sauce and maybe let go of Klain. 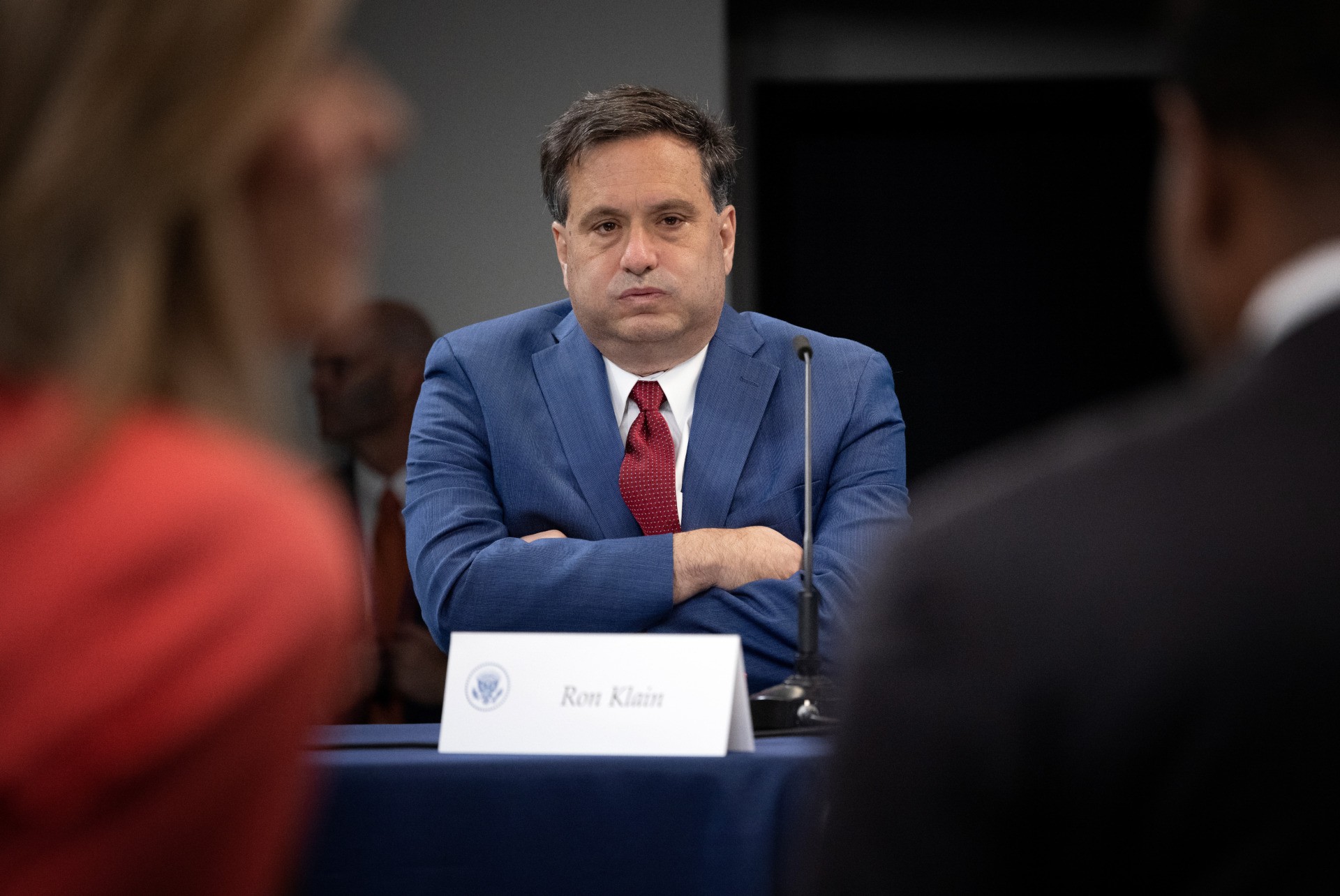 It’s hard to remember now, but Biden was supposed to be a centrist consensus-builder — you know, occupying the middle. That’s certainly what nervous Democrats, representing purple and red areas, wanted. And Klain, being a veteran of both the Clinton and Obama administrations, was seen as a safely mainstream Democrat—a liberal, for sure, but not a leftist.

That was the hope, anyway. And yet then came the Biden presidency, with Klain as the chief of staff, which was much different than had been advertised. The Biden White House includes, for instance, a Gender Policy Council that pushes for total transgender triumph, as well as the instant release of accused criminals.

We could cite a hundred more examples of Biden’s Robespierre-an drift, and yet for now we can focus only on the “voting rights” (critics call it “federal takeover”) legislation, which can never be passed in the Senate unless Democrats first figure out how to eliminate the Republican filibuster.

Weirdly, even though the filibuster is intact, Biden, Klain, and their key ally, Senate Majority Leader Chuck Schumer (D-NY), barreled ahead with a legislative kamikaze approach, seeking to pass the voting bill—even though they didn’t have the votes. In the cool assessment of Punchbowl News, an e-newsletter that normally eschews commentary:

To be honest, we still don’t fully comprehend the Democratic strategy here. Schumer, backed by Biden, pushed this fight to the bitter end knowing he was going to lose. How that helps him, Senate Democrats or Biden just isn’t apparent to us. Wednesday’s vote, in fact, cemented [Joe] Manchin and [Kyrsten] Sinema as the biggest pariahs in the Democratic Party. So how does it help Schumer get their votes during the rest of the 117th Congress, or further the party’s goals heading into the midterm elections? …

A harsher take came from the moderately left-wing pundit Matt Yglesias, who said of the voting-bill push, “Genuinely insane that intra-coalition dynamics are pushing leaders to a course of action that they themselves concede has negative expected value.”

Genuinely insane that intra-coalition dynamics are pushing leaders to a course of action that they themselves concede has negative expected value. https://t.co/Z2nUJ64GyC

As we all know, the bill was defeated.

In other words, Biden is suffering a bad case of disjunction. That’s the political science-y way of saying the earthier FUBAR.

Interestingly, disjunction is a term closely associated with the presidency of Jimmy Carter back in the late 1970s. Carter presided, if that’s the right word, over the disintegration—disjunction—of the Democratic coalition, and he himself was defeated after a single term. (Here at Breitbart News, this author has written many articles comparing Biden to Carter.)

Indeed, while we’re on the subject of Biden and Carter, we can even find a parallel concerning their White House chiefs of staff, Klain today and Hamilton Jordan back then. 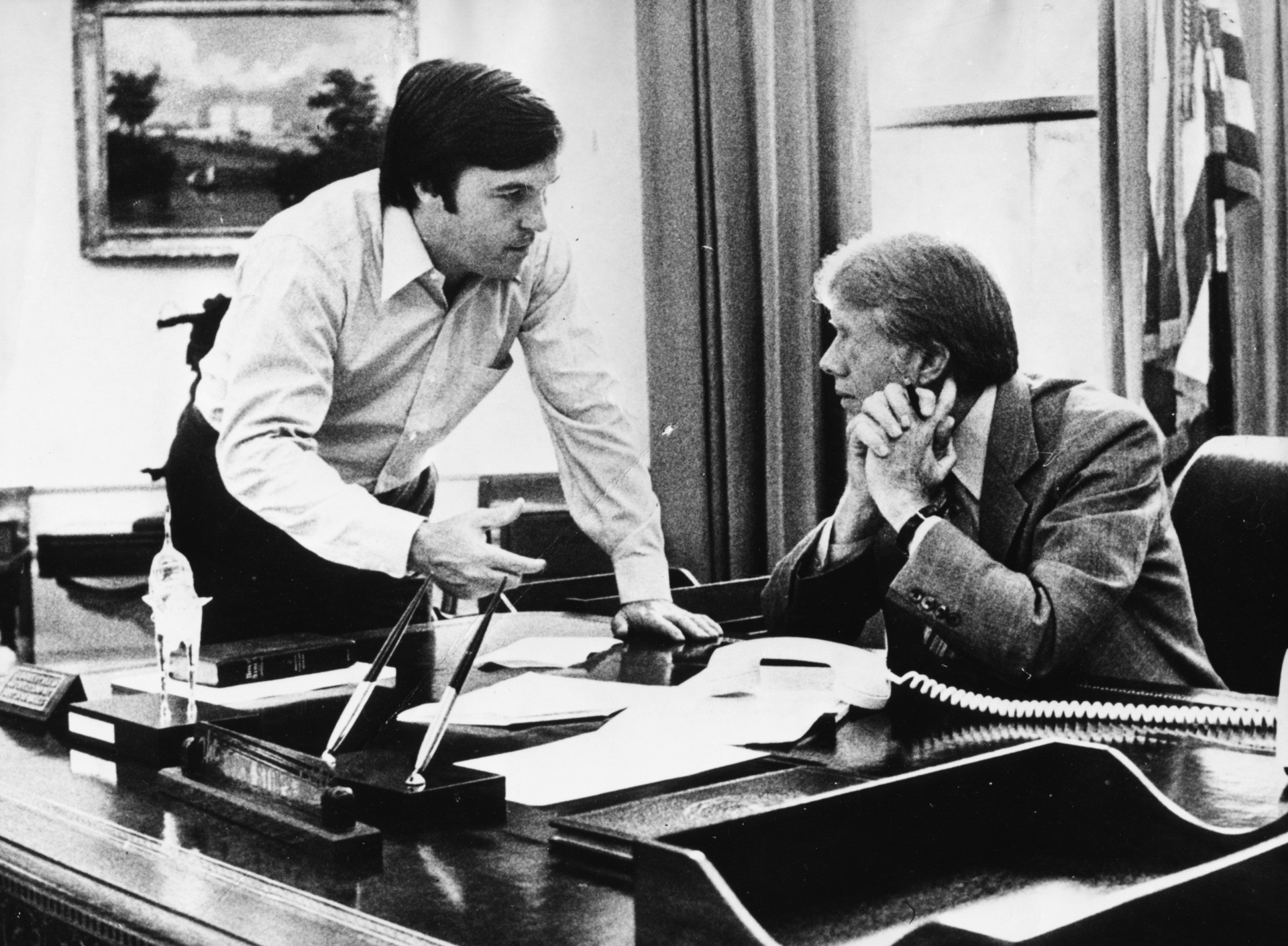 President Jimmy Carter in the Oval Office talks to his Chief of Staff Hamilton Jordan on July 19, 1979. (Keystone/Hulton Archive/Getty Images)

As we have seen, Klain is viewed by vocal Democrats on Capitol Hill as a distinct liability. And four-plus decades ago, the same was true for Jordan. To illustrate, here’s a headline from the Washington Post, July 19, 1979: “Jordan Meets With Rep. O’Neill, Gets Taken Down a Peg or Two.” The O’Neill in the header was House Speaker Tip O’Neill (D-MA); he was a powerful fellow and not a good enemy to have. As the Post article detailed of the O’Neill-Jordan relationship, “The two are not exactly close friends and O’Neill’s disdain for the aide he once referred to as ‘Hannibal Jerkin’ has been an open secret.”

We can pause to observe that Hamilton Jordan being called Hannibal Jerkin is a different kind of insult than Ron Klain being called Bernie Sanders. And yet of course, both insults sting.

Given all the incoming he’s taking, Klain could well prove to be expendable in Biden’s eyes. After all, even now, plenty of Democrats who would love to have Klain’s job—and more than likely, one or more of those West Wing wannabes helped craft the Politico story.

So yes, Klain could be the scapegoat. And yet here’s the thing about scapegoats, at least since the time of the Bible: After the scapegoat is driven into the wilderness, the real problem still remains.