“More than two dozen Taliban fighters, armed with rocket launchers and assault rifles, were seen riding in colorful, swan-themed pedal boats at Band-e Amir National Park in the eastern Bamiyan province of Afghanistan Saturday,” according to the Post.

“In one of the photos shared to Twitter by reporter Jake Hanrahan, a Taliban fighter appears to be aiming a rocket-propelled grenade,” the newspaper observed.

Yahoo News Australia identified Hanrahan as a “journalist and filmmaker” on Sunday while reporting on the images posted to his official Twitter account on September 18. Breitbart News has not been able to independently verify the authenticity of the photos in question.

(These photos are real) pic.twitter.com/oWHJXDpVfZ

Murad Gazdiev, a correspondent for the Russian state-owned news site RT also shared the lake images to his official Twitter account on September 19. He described the Taliban members depicted in the photos as “relaxing” at Band-e-Amir National Park, which was once a popular tourist destination within Bamiyan province.

“Not sure why one would bring a rocket launcher with him onto a pedal boat, but here are a bunch of Taliban fighters relaxing at Band-e-Amir national park,” Gazdiev wrote in an accompanying caption.

CNN Travel dubbed Band-e Amir National Park an “oasis of peace” in a print and digital piece promoting the site in June 2019.

“In the heart of a country ravaged by war, visitors can rent paddle boats on one of six lakes,” the travel outlet wrote in a caption of a video showing off the park’s natural wonders. The boats in the 2019 CNN Travel video — painted blue, yellow, and white, and numbered in green — appear nearly identical to the ones seen in the unverified Taliban photos that emerged over the weekend.

“Spanning some 600 square kilometres, the oasis is located in country’s mountainous Bamiyan province,” the travel outlet wrote at the time.

“The area came to international attention after the Taliban destroyed its famous sixth-century Buddha statues in 2001,” according to CNN. 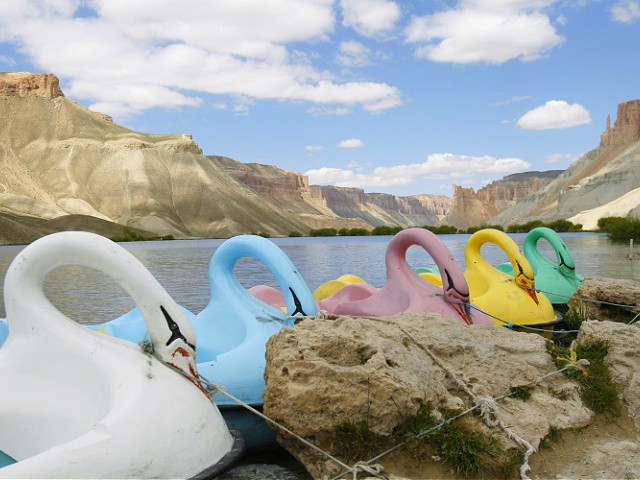 In this photo taken Tuesday, June 16, 2009, pedal boats are seen anchored at a lake in Band-e-Amir, in the central Afghanistan’s province of Bamiyan. The six azure lakes in Band-e-Amir are Afghanistan’s first national park. In an attempt to return one small part of the country to normalcy government officials and international donors are promoting tourism to attract visitors to the Bamiyan area. (AP Photo/Rahmat Gul)

“It was named a national park in 2009 in the hope that it would offer citizens a respite from conflict in the country,” the U.S.-based news outlet added.

The Taliban terror group regained full control over Afghanistan last month after previously ruling the country from 1996-2001. Taliban fighters invaded Kabul, Afghanistan’s national capital, on August 15 and quickly deposed the city’s U.S.-backed government. The jihadist terror group, based on Sunni Islam, has since reestablished Islamic law, or sharia, as Afghanistan’s ruling apparatus, as it did in the late 90s.