“The Islamic Council of Ideology had objected to the punishment of chemical castration for rapists for being an un-Islamic practice, so we decided to remove it from the law,” Maleeka Bukhari, Pakistan’s parliamentary secretary on law, told reporters on November 19 in Islamabad.

Pakistan’s Islamic Council of Ideology is “a constitutional advisory body mandated to interpret and ensure all Pakistani laws are in line with Islam,” according to the U.S. government-funded VOA.

“It would have been unconstitutional to pass the law as all laws must be under the Sharia [Islamic law] and the Islamic holy book the Quran,” Bukhari noted on Friday according to Sputnik, a Russian state-owned news agency.

“Therefore, we can’t pass any law that goes against these values,” Bukhari added.

Pakistan’s parliament on November 17 passed an anti-rape bill that went into immediate effect. The law had called for the chemical castration of serial rapists, which was a punishment Pakistan Prime Minister Imran Khan had specifically advocated for over the past year. Khan said he hoped to introduce chemical castration as a penalty for rapists in response to an ongoing rise in rapes of women and children across Pakistan. 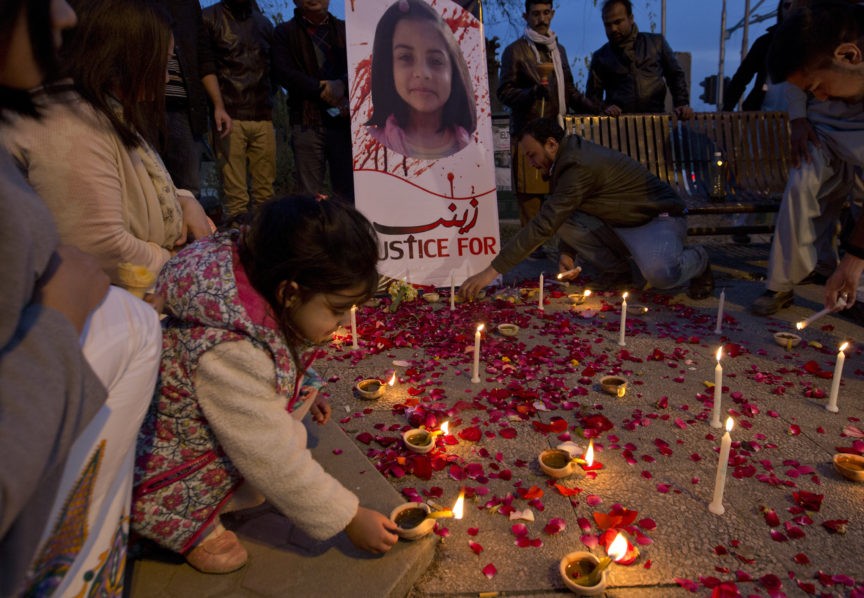 A Pakistani girl lights a candle during a memorial for Zainab Ansari, an 8-year-old girl who was kidnapped, raped, and killed in Kasur, Thursday, Jan. 11, 2018, in Islamabad, Pakistan. (AP Photo/B.K. Bangash)

“The prime minister’s remarks came amid a national outcry stemming from the September 2020 assault on a woman, who was dragged out of her car and raped by two men at gunpoint in front of her children, when her car was stalled on the side of the road,” VOA recalled on Friday.

The incident sparked a major uproar by the Pakistani public, which subsequently demanded Islamabad enforce stiffer penalties for sex offenders to deter rape. Asked by a reporter about the September 2020 motorway rape a week after it took place, Khan said he believed the perpetrators should be publicly hanged. He acknowledged this form of punishment might have endangered a “preferential trade status” bestowed upon Pakistan by the European Union (E.U.) due to the bloc’s views on human rights. The consideration inspired Khan to consider other penalties for rape, such as chemical castration.

“In Pakistan, at least 11 rape cases are reported daily with over 22,000 rape cases reported to police across the country in the last six years,” Asian News International (ANI) reported on October 18, citing data provided by Pakistan’s government.

“Only 77 accused of the 22,000 cases were found to be convicted and the conviction rate is sadly around 0.3 percent,” the Indian news agency observed.

Pakistan’s new anti-rape law promises to enact a number of reforms designed to discourage serious sex crimes. It will ostensibly “allow for speedy convictions and severe sentences for perpetrators, including the death penalty,” according to VOA. “The legislation requires the government to establish special courts across Pakistan to try rape cases in secrecy and decide them ‘expeditiously, preferably within four months.'”

The law will additionally establish “a nationwide register of sex offenders” maintained in part by a National Database and Registration Authority, the U.S. broadcaster detailed on Friday. “The identity of victims will be protected and special ‘anti-rape crisis cells’ will be formed to conduct medical examinations of victims within hours of the crime.”

Individuals found guilty of “gang rape” face severe punishments such as the death penalty or life in prison, according to VOA.