Nolte: MSNBC Gaslights with Claim Inflation Is a 'Good Thing'

Far-left MSNBC is hoping to gaslight the public into believing Joe Biden’s record inflation is a “good thing.”

The cruel liars at MSNBC have since deleted a tweet that said, “Why the inflation we’re seeing now is a good thing.” 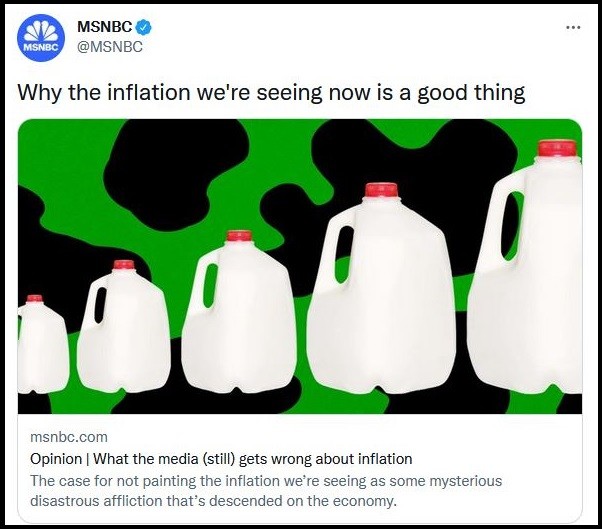 The establishment media’s desperate willingness to whore out their credibility with laugh-out-loud nonsense like this is getting embarrassing to watch—but in a good way. I’m enjoying every minute of the media’s credibility implosion.

The tweet was in support of an MSNBC columnist who declares the coronavirus “the unlikely hero of our inflations crisis,” but then goes on to wrist-flick the inflation crisis.

“The message Americans have been getting about inflation from in recent months can be summed up in four words: Be afraid. Very afraid,” the columnist writes, adding:

It’s a message that much of the media has been happy to spread, epitomized by an odd segment about rising food prices that CNN ran last week. The segment was supposed to show, in the words of a much-mocked tweet promoting it, “how badly inflation is hitting the middle class.” But instead of looking at a typical-size middle-class American family, it focused on a Texas family with nine kids, one that buys 12 gallons of milk a week. In the process, the segment succumbed to one of the media’s worst tendencies: taking a real issue and overhyping it beyond recognition.

FACT: This inflation was caused by the federal government overheating the economy by spending trillions and trillions of dollars we don’t have.

FACT: Inflation is a cruel tax on the poor, on the working class, on those who live on the margins.

FACT: Wages are not keeping up with inflation, so Americans are falling behind.

How can any decent, caring person look at our economy, look at the explosion in gas and food prices, be aware that cold weather is coming and with it families who are worried about being able to afford heat, and just laugh it off?

But this is how far the media are willing to go to protect Democrats and the extreme left agenda. 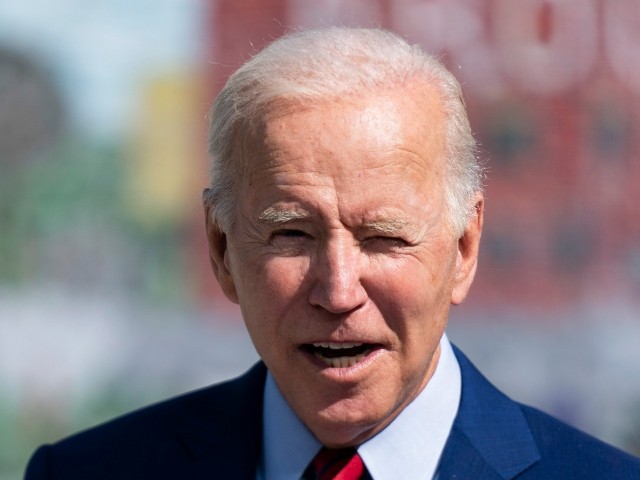 President Joe Biden speaks at Brookland Middle School, Friday, Sept. 10, 2021 in Washington. Biden has encouraged every school district to promote vaccines, including with on-site clinics, to protect students as they return to school amid a resurgence of the coronavirus. (AP Photo/Manuel Balce Ceneta)

And it’s not just that the media are just full-blown propagandists now. They are so out of touch with the concerns of everyday Americans, so far removed in their velvet bubbles, that none of this is real to them. Look at this part:

What all this means is that American consumers are, relatively speaking, flush, and it’s that strong demand for goods and services that is sending prices higher. But it’s taking manufacturers and food producers time to increase supply after cutting back production during the pandemic.

Hey, what are you whining about?

Don’t you see how flush you are?

Are you too stupid to grasp how flush you are? 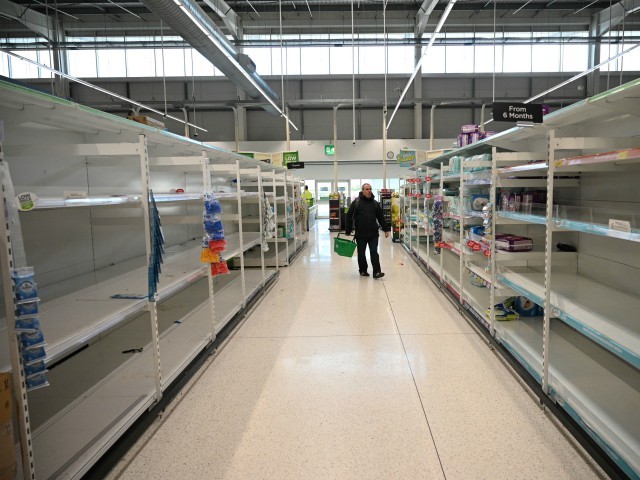 A shopper walks past empty toilet roll shelves amidst the novel coronavirus COVID-19 pandemic, in Manchester, northern England on March 20, 2020. – The British prime minister urged people in his daily press conference on March 19 to be reasonable in their shopping as supermarkets emptied out of crucial items — notably toilet roll — across Britain. The government said it was temporarily relaxing elements of competition law to allow supermarkets to work together to maintain supplies. (Photo by Oli SCARFF / AFP) (Photo by OLI SCARFF/AFP via Getty Images)

You know, I’m lucky enough to make a pretty good living, but I’ve never forgotten, nor will I ever forget, the lean years. You know, when you deliberately forget to sign the rent check to buy yourself a few days. When you turn the thermostat down to 62 at night. When a car repair maxes out an already maxed-out credit card, the one you can only afford to make the minimum payment on, which means you’ll be treading water forever.

And that’s another problem with our wretched elite. The silver spoon syndrome. Most of these fascists went from prep schools to college to the media bubble. They know nothing of struggle, of life in the real world. To them, inflation is just a number and one that can be spun to protect the ruling regime.

Well, after what we saw in Virginia, I get the sense America sees through this garbage…

There is no critical race theory!

Inflation is a good thing!

Okay, media… Let’s touch base again after the midterms.