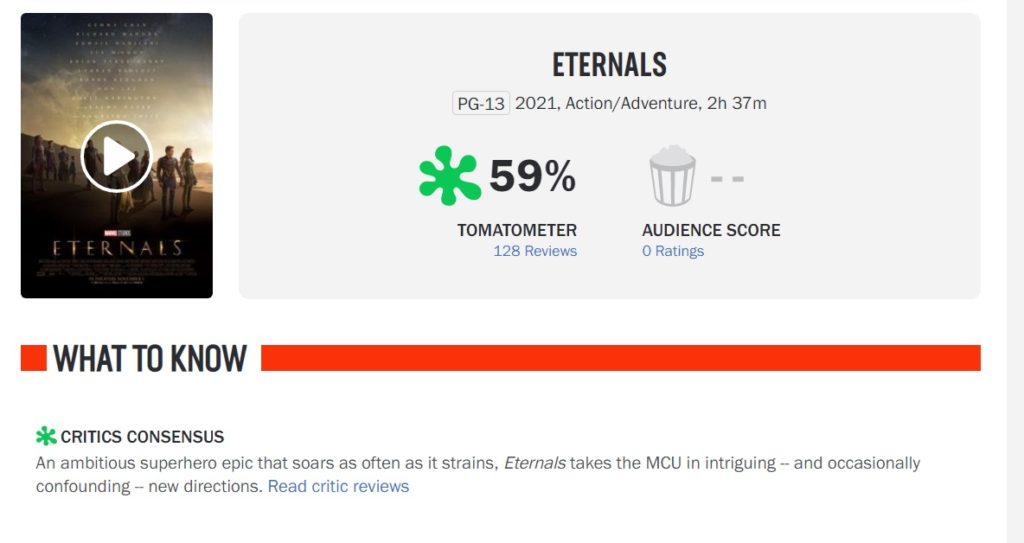 To earn a “rotten” status, more than 40 percent of submitted reviews need to qualify as negative. Over the weekend, Eternals crossed that threshold, with only 59 percent of critics giving the $200 million production a passing grade.

Because it’s right on the bubble between the 59 percent that makes it “rotten” and the 60 percent that qualifies as “fresh,” that status could change as more reviews slide in. But, at this point, nothing’s going to change the fact that Eternals is the worst-reviewed Marvel Cinematic Universe (MCU) entry yet.

In fact, it’s the only title ever to hit “rotten.”

Eternals arrives in theaters this coming Friday and is vitally important to the MCU’s future — an A-list cast, a massive budget, and Disney’s first openly woke Marvel chapter. Eternals offers up an openly gay character and promises more to come in its next installments. Of course, no normal person wants to see that. We just want to enjoy a couple of hours of escapism without being told to embrace sexual deviancy or having to explain it to our kids. But Hollywood will always put its agenda above profits.

As I mentioned last week, this movie must really suck to be receiving so many bad reviews.

Usually, “woke” is enough to win positive reviews. No matter how awful the movie or TV show is, critics still gush over everything woketard. Either these dishonest critics want to fool normal people into submitting themselves to this junk, or the critics lack the moral courage to criticize something politically correct. I can’t even count the number of times over the years a movie or TV show lauded over by left-wing critics has been completely forgotten, as propaganda always is.

Of course, the only thing that matters to Marvel is the box office, and already the franchise is already floundering.

Shang-Chi and the Legend of the Ten Rings was very well-reviewed but grossed just  $423 million worldwide. Black Widow did even worse, with just $380 million worldwide. Numbers like that mean two things: 1) both lost money, and 2) Marvel is so far having trouble attracting a post-Avengers audience.

It’s just a fact that everything announced after Avengers: Endgame feels anti-climactic. I also think there’s some superhero fatigue setting in. Eventually, audiences tire of these fads, and we’re now in year 12 of the whole Marvel thing.

The dumbest movie, though, is Marvel going woke. The MCU used to promise us a good time. Now it promises a lecture.

Wonder Woman, Ghostbusters, Terminator, Men in Black, Star Wars, Birds of Prey, Suicide Squad, and Charlie’s Angels are all franchises killed by woke. People hate this shit. Marvel is unlikely to be the exception, especially without Tony Stark.