The establishment media are now so broken, Deadline Hollywood is complimenting NBC reporters for misleading the public.

After Saturday’s NASCAR race, the crowd broke into one of those glorious “Fuck Joe Biden” chants that are sweeping a nation already tired of His Fraudulency’s Joe Biden’s corruption, policies, and judgment.

It just so happened that when Saturday’s chant broke out, NBC Sports reporter Kelli Stavast was interviewing that day’s winner, Brandon Brown. But instead of behaving like a professional and ignoring the chant, to protect His Fraudulency, she made a fool of herself with the absurd claim the crowd was chanting “Let’s go, Brandon!”

#FJBMovement alive and strong as it finds it way to @Nascar@TALLADEGA chanting "Fu*k Joe Biden" during race winner's interview. #NASCAR#FJB#FJoeBidenpic.twitter.com/ZRKVJOgF4A

But we’re used to this. NBC News lying to us is no longer a surprise or unexpected. On the contrary, we expect NBC News to lie to us. If NBC News did not lie to us, that would be actual news.

However, something brand new is a major media outlet openly and publicly complimenting another news outlet for misleading the public.

NBC NASCAR reporter Kelli Stavast is either hard of hearing, or a very, very quick thinker.

Stavast bravely soldiered on despite the obvious disruption. As an emotional Brown struggled to be heard above the crowd’s din, she interjected. “As you can hear the chants from the crowd, ‘Let’s go, Brandon.’”

That opening sentence is a jaw-dropper. If Deadline wants to suggest Stavast didn’t hear the chant, fine. I find that excuse absurd, but fine. My issue is with the second half of that sentence, where Deadline assumes Stavast understood the chant and then compliments her as a “very, very quick thinker” for lying to the public. 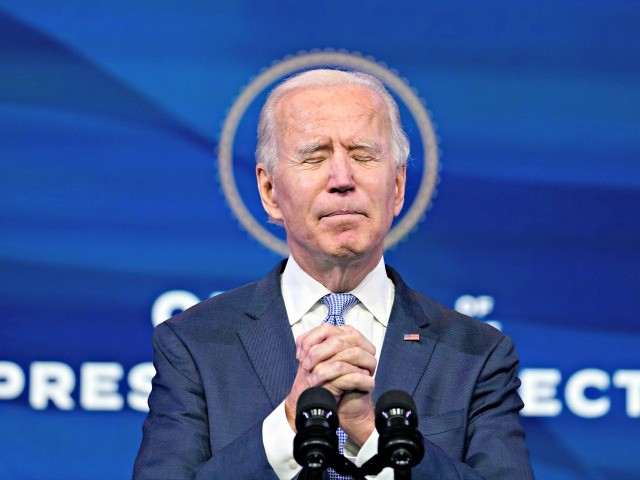 President-elect Joe Biden speaks at The Queen theater in Wilmington, Del., Wednesday, Jan. 6, 2021. Biden has called the violent protests on the U.S. Capitol “an assault on the most sacred of American undertakings: the doing of the people’s business.” (AP Photo/Susan Walsh)

You see, the media are now so broken that when you lie to the public, far-left outlets like Deadline will compliment you for spreading fake news. The media are now so corrupt that misleading the public is considered heroic and wins you headlines like: “Salvages Embarrassing NASCAR Interview With Verbal Dexterity.”

The reason this Deadline story is so revealing is because, at last, these dishonest propagandists are telling us what they truly believe: Lying to the public to further the cause is a noble act.

And if you really want to know how much these people hate you, here’s the last paragraph:

Perhaps the gods were angry at the Alabama crowd’s outbursts. Inclement weather has postponed today’s scheduled NASCAR Cup Series YellaWood 500 at Talladega. It will now begin on Monday, Oct. 4, at 1 p.m. ET on NBCSN.

This is the same Deadline that gushes over Colin Kaepernick and every single political outburst at every awards show, but a bunch of everyday Americans laughing at the expense of the most powerful man in the world is deserving of retribution from the gods.