Buttigieg, who was absent for two crucial months last summer during unannounced paternity leave, showed up at the Los Angeles and Long Beach ports for a press conference whose unusually lengthy list of speakers surprised local reporters.

Not 1, not 2, but 13 speakers scheduled for the @SecretaryPete press conference at the port. pic.twitter.com/h6eGov0cTv

The Biden administration is taking credit for easing a supply chain crisis that Buttigieg himself said in October would create problems for Christmas gifts. Buttigieg also said that the crisis was a sign of economic progress under President Joe Biden.

By December, inventories at many retail outlets had recovered, and Buttigieg claimed the administration deserved credit — though the administration has sought to deflect blame for higher prices. Mayor Garcetti, who is leaving L.A. to take up an appointment as U.S. Ambassador to India, echoed Biden’s claims, saying that Buttigieg had “saved Christmas.”

“This man saved Christmas…”@MayorOfLA@ericgarcetti gives @SecretaryPete credit for expediting fixes for supply chain issues in time for gifts to be delivered by Dec. 25th. pic.twitter.com/avZeQaVMpB

However, supply chain problems and shortages continue throughout the country, and are expected to last for months. 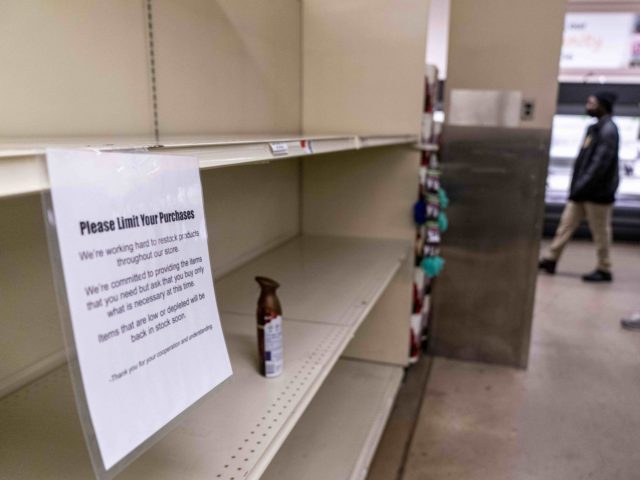 A sign reads “please limit your purchases” on empty shelves of toilet paper at a supermarket in Washington, Tuesday, Jan. 4, 2022. (AP Photo/Andrew Harnik)

Moreover, the Seatrade Maritime Newsreported Tuesday that the “the queues of ships to dock at LA/LB terminals remain as long as ever”:

As of Monday, 3 January, some 105 containerships were backed-up to enter the two ports according to the Marine Exchange of Southern California. This number includes 12 containerships anchored or loitering within 40 miles of LA and LB, plus 83 containerships slow steaming or loitering outside the Safety and Air Quality Area (SAQA).

Cargo ships, which once crowded near the ports, are now more spread out, in deference to local air pollution regulations — easing some of the pressure on politicians, who suffered criticism ever day the armada of container ships was visible from the shore.

The administration has been given some credit for easing part of the crisis. The number of containers sitting on the docks fell after the administration threatened to slap fines on companies that failed to collect them. The initiative has been successful enough that the fines have never needed to be imposed, since companies stepped up to comply and moved containers offsite.

Private shipping companies also responded to the bottlenecks by using smaller ships to move goods in and out of the ports.

However, the fact that cargo ships continue to wait in large numbers is a sign that the crisis is continuing. On Monday, Gov. Gavin Newsom announced $2.3 billion in new proposed spending to increase port capacity to help improve supply chains.