Recommendations designed to make it easier for federal workers and contractors to unionize without hinderance will be delivered Monday by a labor task force led by Vice President Kamala Harris.

The report argues the decades-long decline in left-wing worker organization must be countered at the same time a rising share of income has allegedly been going to the top 10 percent of earners.

A labor union is opposing seaports' ability to quickly and efficiently move containers from ships to trucks, hurting the supply chain. https://t.co/r13rb2Km6d

It further claims most Americans have a “favorable impression of unions” and would join one if given the option in a vote.

This favorable view is despite the Labor Department’s own reporting last month that barely 10.3 percent of U.S. workers belonged to a union in 2021, down from 20.1 percent in 1983.

According to AP, many of the proposals to increase unionization are specific directions focused on the federal government as an employer. 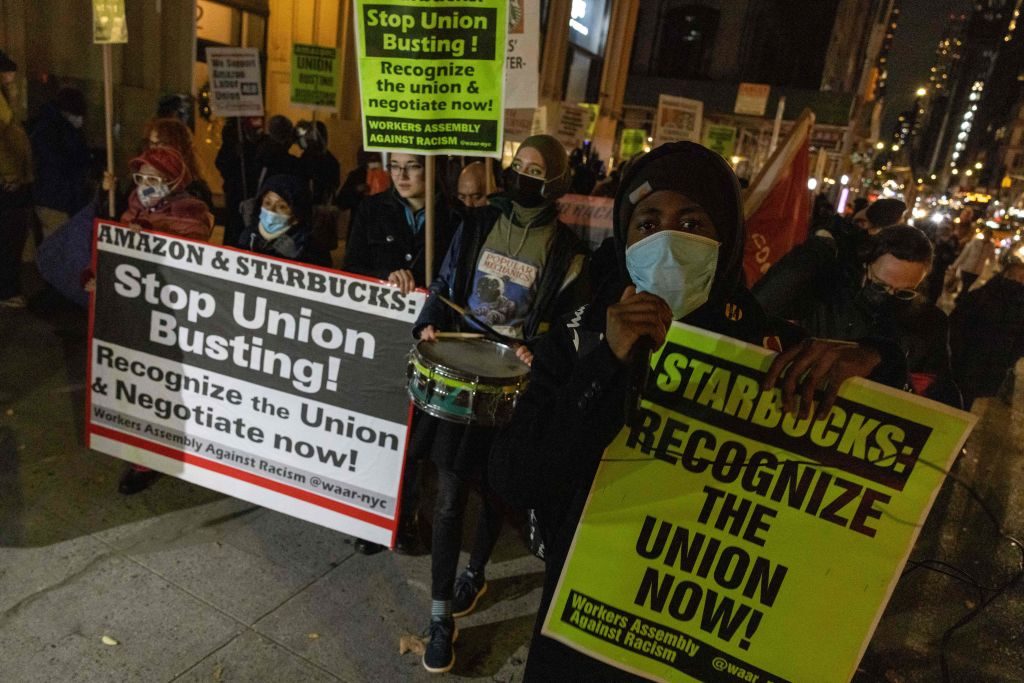 People march during a protest in support of Amazon and Starbucks workers in New York City on November 26, 2021. (YUKI IWAMURA/AFP via Getty Images)

The Interior Department is among four agencies that will now let union organizers talk with employees on federal property, a rule that applies to private-sector employees on contract with the government.

The departments of Transportation and Commerce will set preferences and guidelines for federal grants to foster union jobs, according to AP.

There will be a ban on federal contract dollars going to anti-union activities by the Defense, Health and Human Services and Labor departments as well as the Office of Management and Budget.

You can appease unions and woke grievance mongers some of the time, but you can't appease all of them all of the time! https://t.co/wqWH1fIO23

Other proposals include efforts to improve workers’ awareness of their rights and to enforce existing labor laws.

The task force plans to submit a follow-up report in six months to describe how agencies are implementing the policies and to issue new recommendations.

The Associated Press contributed to this story