President Joe Biden met with union organizers at the White House on Wednesday, promising to push for amnesty for illegal immigrants.

“I want us to see us finally, finally, provide DREAMers, TPS (Temporary Protected Status) recipients, farmworkers, essential workers, a pathway to citizenship,” Biden said. “Bringing them out of the shadows so they can receive the protection and representation that our laws and our unions provide.”

During the event, AFL-CIO President Liz Shuler agreed with Biden, calling for a “long overdue pathway to citizenship” for people working in the United States who were not citizens, and endorsed his radical spending bill expanding entitlements.

“Every working person in every state would benefit in some way,” she said. 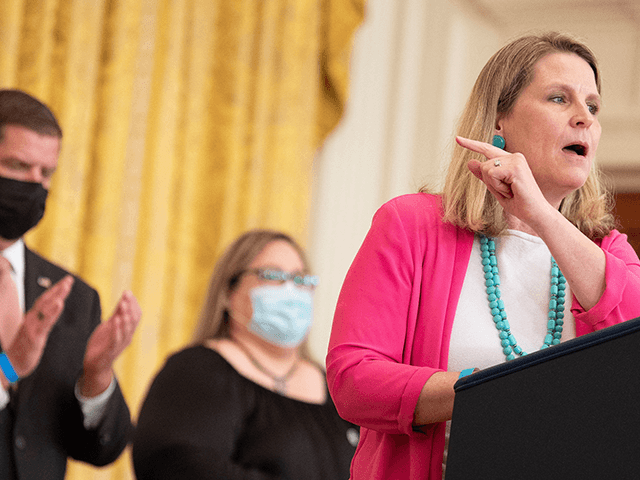 AFL-CIO President Liz Shuler speaks about Labor Unions during an event in the East Room of the White House on September 8, 2021, in Washington, DC. (Photo by BRENDAN SMIALOWSKI/AFP via Getty Images)

Biden has endorsed the idea of including amnesty in his partisan Senate budget reconciliation “infrastructure” bill — even though it remains unclear whether it will be approved by the Senate parliamentarian.

If it passes, the bill would provide citizenship for a population of at least eight million people who are not United States citizens. The president has allowed roughly 1.6 million migrant workers into the United States, creating a surplus in the labor supply that depresses wages for American workers.

Biden reminded union members at the White House that his wife Jill Biden was a member of the teachers’ union.

“And by the way, of course, I sleep with an NEA (National Education Association) member every night,” he joked. “Same one. Same one.”

Wednesday on SiriusXM's "The Megyn Kelly Show," host Megyn Kelly said that the Biden Administration's scientists have lied long enough on the when and how the COVID pandemic started.

At least 207 law enforcement officers died in the line of duty as a result of COVID-19, according to the Officer Down Memorial Page. Officers around the nation now face COVID-vaccination mandates.