A suspect wanted by the FBI for crimes during the January 6 incursion at the U.S. Capitol is seeking asylum in Belarus. Evan Neumann denies the charges and claims he is a victim of “political persecution.”

“I do not consider myself having inflicted any harm,” he said. “One of the charges was particularly insulting, namely that I hit a police officer. This has no grounds at all.”

NBC reported that according to a March 23 filing in the U.S. District Court in Washington, D.C., Neumann is wanted on six criminal charges.

Neumann, who according to the court filing is from Mill Valley, California, said in the interview that his attorney had advised him to travel to Europe for business. Neumann said he traveled to Italy in March and then made his way to Ukraine. After some months there, he said, Ukrainian security officials started to follow him, prompting him to walk over the border into Belarus, where he was detained by border guards.

The Belarusian Foreign Ministry did not immediately respond to requests for comment about whether the government plans to grant asylum to Neumann.

The Justice Department has laid out charges against hundreds of people from nearly every state, while the House committee investigating the attack has interviewed more than 150 people and issued subpoenas to several former Trump associates.

“The FBI confirmed to NBC News that Neumann is still a wanted man,” the outlet reported. 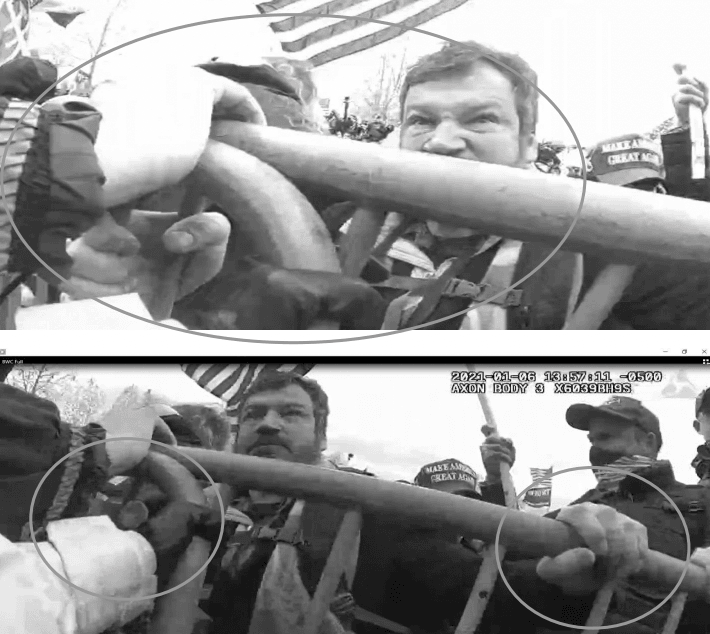 These body camera video screenshots show a man identified as Evan Neumann moments before he allegedly assaulted police officers and breached the barricades of the U.S. Capitol on January 6, 2021. (U.S. Department of Justice)

Tim O’Connor, a spokesperson for the U.S. Embassy in Belarus, said in a statement, “We have seen Belarusian state media reporting about Mr. Neumann. Due to U.S. privacy laws, we are limited in what we can say about individual U.S. citizens.”

“The United States condemns the Lukashenko regime for its brutal measures against members of civil society, the media, athletes, students, legal professionals, and other citizens,” the statement added.

The Hill also reported on Neumann:

Neumann said he moved from Switzerland to Italy after fleeing the U.S. and then settled in Ukraine for a couple of months. However, he said he decided to flee to Belarus after the Ukrainian forces started following him around the city. Ukraine is another target of pro-Russia propaganda.

He said he was detained by Belarus police in August for crossing into the country illegally via Ukraine.