Some of the staffers pointed toy guns at the aspiring public servants during the testing session.

“[T]he Justice and Human Rights Ministry held a civil servant entrance exam in Surabaya, East Java and employed five invigilators who were fully masked and wore bright pink coveralls a la the guards in Squid Game,” the Indonesian news site detailed. “To complete the role-play, the invigilators held toy firearms and pointed them at participants for the camera.”

Reenacting a scene from Squid Game, ministry officials sounded an alarm from inside the exam building, after which “five pink soldiers appeared” in the testing room, CNN Indonesia described on Thursday.

The fake soldiers, “equipped with long-barreled weapons,” then approached test-takers. Some of the ministry staff pointed their toy rifles directly at the heads of some exam participants, according to video footage of the scene.

“Instead of being afraid, the examinees were amazed and gave a lively applause,” CNN Indonesia claimed.

“We wanted to make the [exam] participants more relaxed and happy,” Krismono, who heads Indonesia’s Ministry of Law and Human Rights office on the island of East Java, told CNN Indonesia on October 20.

Krismono — who, like many in Indonesia, goes by one name only — said his office chose to reenact a scene from Squid Game during the exam “because there are similarities” between the South Korean television series and the Ministry’s employee selection process.

“[P]articipants had to go through various obstacles in the game [depicted on Squid Game]. The person who survives to the end is entitled to a prize,” he explained, describing the Netflix show.

“In this case, those who are successful will be appointed as Justice and Human Rights Ministry civil servants,” Krismono said. 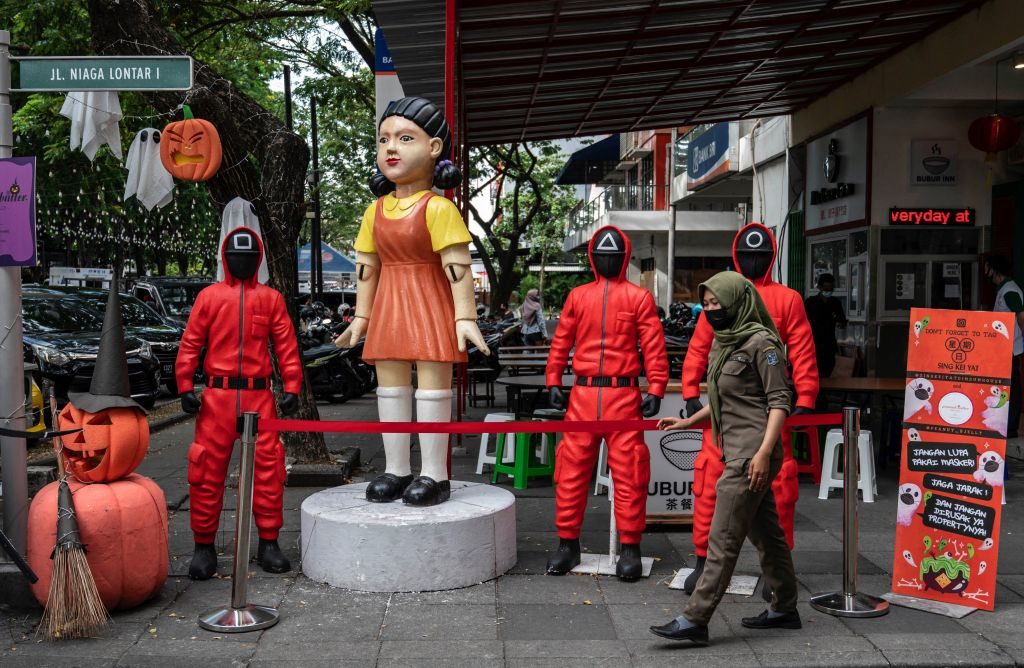 A woman walks past statues featuring characters from the Netflix series Squid Game at a food court to attract visitors in Surabaya, Indonesia, on October 21, 2021. (JUNI KRISWANTO/AFP via Getty)

“The difference is, the participants in Squid Game are hopeless people, whereas people who took this entrance exam are those who are full of spirit and enthusiasm,” he added.

Krismono told CNN Indonesia on Wednesday his office viewed the Squid Game reenactment as a useful tool to gauge the “mental readiness” of exam participants. He claimed some participants were “too tense” before the start of the exam on October 20 and said he believed his office’s “creativity” in reenacting a scene from the popular TV show, “would ease the tension a little.”

“We hope that through this selection we will get human resources who are intellectually qualified and with integrity,” Krismono said.

Wednesday’s civil service exam involved a “basic competency selection” for Indonesians seeking to work for a “prisoners and immigration” arm of Indonesia’s Ministry of Law and Human Rights, according to CNN Indonesia.