The heavy snow that buried Virginia has left hundreds of drivers stranded on Interstate 95 in the state, including former governor and Democrat Senator Tim Kaine.

Drivers are stranded on a 50-mile stretch of the highway that runs along the length of the eastern United States. The stranding event happened after the pile up of six tractor-trailers and authorities are still trying to reach people on Tuesday.

I started my normal 2 hour drive to DC at 1pm yesterday. 19 hours later, I’m still not near the Capitol. My office is in touch with @VaDOT to see how we can help other Virginians in this situation. Please stay safe everyone. pic.twitter.com/Sz1b1hZJZ5

An emergency message is going to all stranded drivers connecting them to support, and the state is working with localities to open warming shelters as needed.

While sunlight is expected to help @VaDOT clear the road, all Virginians should continue to avoid 1-95.

The Associated Press (AP) reported on the first snow of the new year:

Both directions of traffic on I-95 came to a standstill Monday between Ruther Glen, Virginia, in Caroline County and exit 152 in Dumfries, Prince William County, the Virginia Department of Transportation said. “Crews will start taking people off at any available interchange to get them,” the agency tweeted at 5:20 a.m. Tuesday.

Gov. Ralph Northam tweeted that his team responded through the night alongside state police, transportation and emergency management officials. “An emergency message is going to all stranded drivers connecting them to support, and the state is working with localities to open warming shelters as needed. While sunlight is expected to help @VaDOT clear the road, all Virginians should continue to avoid 1-95,” he added.

“We know many travelers have been stuck on Interstate 95 in our region for extraordinary periods of time over the past 24 hours, in some cases since Monday morning,” Marcie Parker, a Fredericksburg District engineer said in the AP story. “This is unprecedented, and we continue to steadily move stopped trucks to make progress toward restoring lanes.”

If you have a medical or life/safety emergency should dial 911. Please provide the make & model of your vehicle, as well as the nearest mile marker. Please stay inside the vehicle. pic.twitter.com/zLMFWGy4TS

“In addition to clearing the trucks, we are treating for snow and several inches of ice that has accumulated around them to ensure that when the lanes reopen, motorists can safely proceed to their destination,” Parker said.

AP reported that people with cell phones have been posting desperate messages about running out of fuel, food and water.

The tractor-trailer collision Monday afternoon caused no injuries, but brought traffic to a standstill, and it became impossible to move as the snow accumulated. Hours passed with hundreds of motorists posting increasingly desperate messages on social media about running out of fuel, food and water.

As of 3:30 p.m. Monday, Virginia State Police responded to more than 2,000 calls for service due to dangerous road conditions, The Free Lance-Star newspaper in Fredericksburg reported.

Compounding the challenges, traffic cameras shut down as much of central Virginia lost power in the snow storm, VDOT reported. 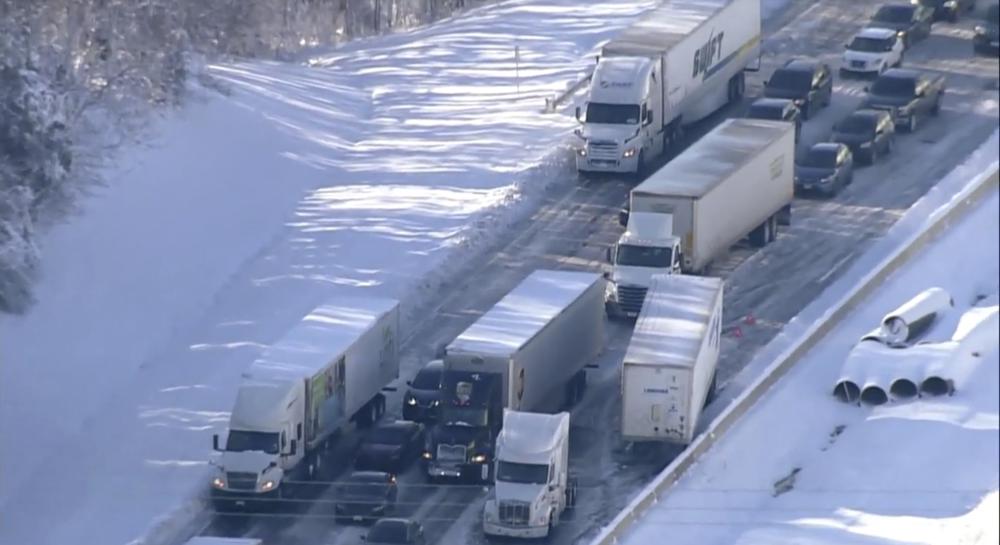 Motorists sit stranded on Interstate 95 in Northern, Va., on Tuesday, Jan. 4, 2022. Hundreds of motorists were stranded all night in snow and freezing temperatures along a 50-mile stretch of Interstate 95 after a crash involving six tractor-trailers in Virginia, where authorities were struggling Tuesday to reach them. (WJLA via AP) 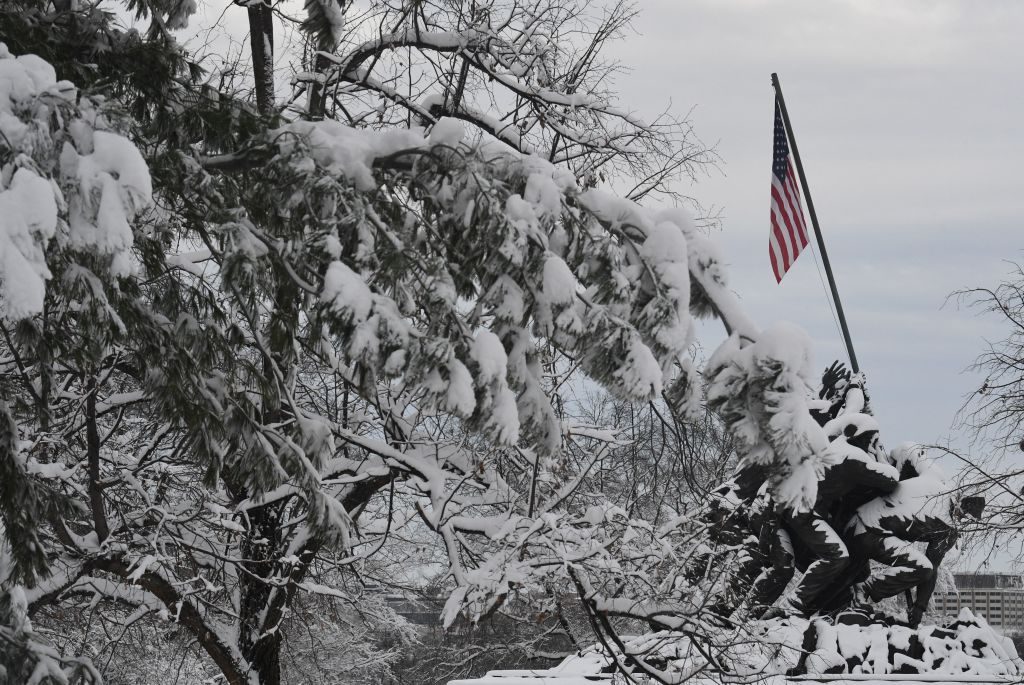 The Marine Corp Memorial of Iwo Jima is seen after a winter storm, on January 3, 2022 in Arlington, Virginia. (OLIVIER DOULIERY/AFP via Getty Images)

More than 281,000 customers remained without electricity on Tuesday, according to the website poweroutage.us.