“Defend the bridge to the last extremity!” Washington shouted to his officers and men 245 years ago as he stared at the massive British army coiling in front of the stone arched bridge that stood between his men and their destruction.

“To the last man, Excellency,” one of Washington’s officers responded to his commander in chief, as a phalanx of Cornwallis’s army readied to charge the bridge.  The stone structure was one of the few places to traverse the swollen waters of the Assunpink.  Behind the bridge lay the nearly frozen Delaware River; Washington’s line of retreat was nearly cut off.  If the British crossed the bridge, they could breach Washington’s defenses and annihilate the American army.

The full story is now told in the new bestselling book, The Indispensables: Marblehead’s Diverse Soldier-Mariners Who Shaped the Country, Formed the Navy, and Rowed Washington Across the Delaware. The book is a Band of Brothers-style treatment of the regiment and the leading revolutionary citizens from Marblehead, a unique largely unknown group of Americans who changed the course of history.

The crucial bridge spanned Assunpink Creek – a tributary on the eastern side of Trenton, NJ.  On the wintery day of January 2, 1777, Washington’s army stretched several miles along the eastern side of the Assunpink.  Following the glorious Christmas Day crossing of the Delaware River in 1776 and capture of the bulk of Trenton’s Hessian garrison, Washington had not intended to fight in Trenton so soon; however, the actions of a militia unit led by John Cadwalader and his Philadelphia Associators forced Washington’s hand.  Unable to cross the ice-choked Delaware on Christmas Day for the attack on Trenton, Cadwalader tried again, and on December 27 entered Trenton.  Washington now had 3,000 stranded men, vulnerable to a British counterattack led by General Charles Edward Cornwallis’s approaching army.  Making matters worse, most of the enlistments in Washington’s army expired on New Year’s Day. Washington mustered his oratorical prowess and appealed to the men to continue fighting.  “My brave fellows, you have done all that I asked you to do and more than could be reasonably expected.  But your country is at stake, your wives, your houses, and all that you hold dear….if you consent to stay one month longer, you will render that service to the cause of liberty and to your country which you probably can never do under any other circumstances.”  Moved by Washington’s impassioned words, the majority of the men remained with the army, and, tragically, many of the re-enlisted men perished before the end of their new enlistment.  Undaunted, Washington re-crossed the Delaware, linked up with Cadwalader, and set up his army on the eastern side of the Assunpink Creek as Cornwallis’s juggernaut approached.

The American army was in the grip of despair.  “No possible chance of crossing the River, ice as large as houses floating down, and no retreat to the mountains, the British between us and them.”  One private summed up the situation, “On one hour, yes, on forty minutes, commencing at the moment when the British troops first saw the bridge and creek before them, depended the all-important question whether we should be independent States, or conquered rebels.”

Washington, never a chairborne general, led from the front. One private captured the moment,  “The noble horse of Gen. Washington stood with his breast pressed close against the end of the west rail of the bridge, and the firm, composed, and majestic countenance of the General inspired confidence and assurance in a moment so important and critical. In this passage across the bridge it was my fortune to be next to the west rail, and arriving at the end of the bridge rail, I was pressed against the shoulder of the General’s horse and in contact with the General’s boot. The horse stood as firm as the rider, and seemed to understand that he was not to quit his post and station.”

Next to Washington on the crucial bridge stood his Immortals (greatly diminished Maryland and Delaware regiments) and a portion of The Indispensables, the Marblehead Regiment.  One officer near the elite troops gave the men a few words of instruction: “Well, boys, you know the Old Boss has put us here to defend this bridge; and by God it must be done, let what will come.  Now I want to tell you one thing.  You’re all in the habit of shooting too high. You waste your powder and lead; and I have cursed you about it an hundred times.  Now I tell you what it is, nothing must be wasted; every crack must count.  For that reason, boys, whenever you see them fellows first begin to put their feet upon this [bridge], do you shin ‘em…Fire low. Bring down your pieces, fire at their legs, one man wounded in the leg is better than a dead one for it takes two more to carry him off & there is three gone.  Leg them dam ‘em I say leg them.” 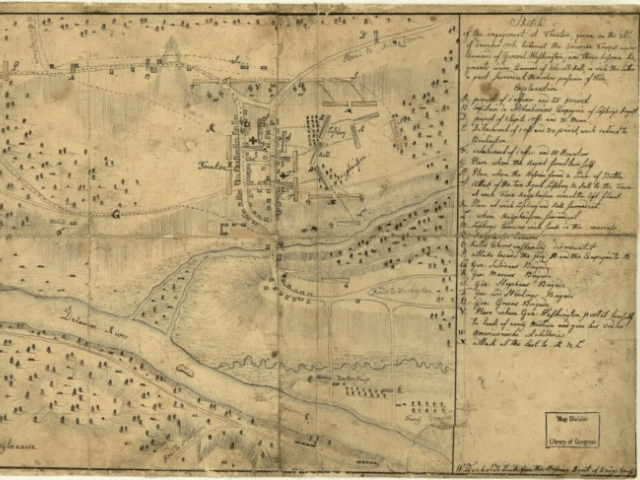 The Second Battle of Trenton unfolded as Hessian grenadiers (Britain’s German allies) in prodigious columns made the first attempt to storm the bridge. The assault troops fought halfway across facing withering American musket fire, many undoubtedly “legged,” slowing their advance.  Scores of Hessians fell, coating the stone bridge with blood and gore.  Unbroken, they reformed and charged, again; dozens fell from the musket fire, and the columns disintegrated before they reached the center of the bridge.  Elated from their triumph, the Americans raised a massive cheer at the site.  “Such a shout I have never since heard… The [American] line was more than a mile in length, yet they shouted as one man.”  Indomitable, the Crown’s troops reformed and charged over the bodies of their dead comrades who “lay thicker and closer together for a space than I have ever beheld sheaves of wheat lying in a field which the reapers had just passed.”  Once again, the Americans held the bridge.

With the third failed attempt, the British withdrew for the night; however, Washington’s army was in grave danger of being encircled and destroyed by Cornwallis’s larger force.  Nightfall approaching, Cornwallis confidently postponed the main attack, and opted to wait for the morning.  According to legend, he rebuked one of his officers, who insisted that unless they attacked immediately, Washington would be gone by daybreak.  To which Cornwallis supposedly retorted, “We’ve got the old fox safe now.  We’ll go over and bag him in the morning.”  Instead of retreating, the “Old Fox” boldly persevered, attacking and defeating the British at Princeton. 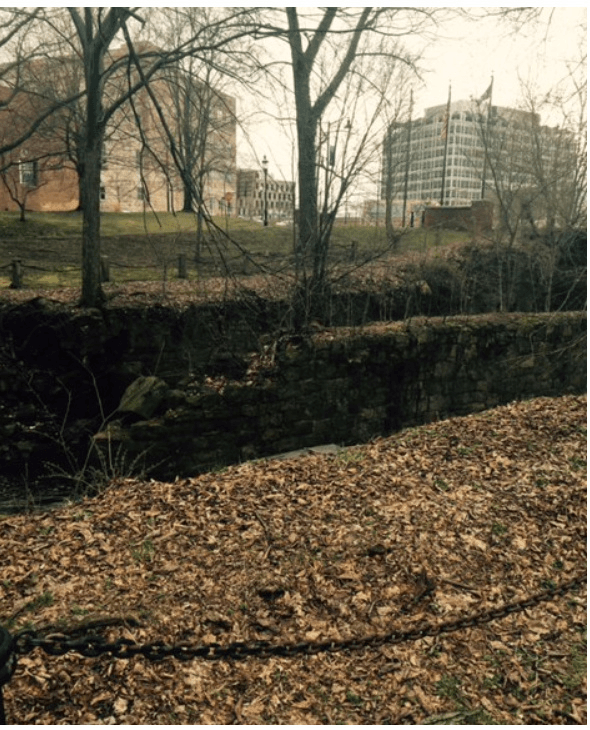 Photo taken by Patrick K. O’Donnell of some of the stonework from the original bridge

A portion of the original stone structure of Assunpink Bridge, the Bridge That Saved America, remains to this day, standing proudly in the heart of Trenton, unmarked, without sign or interpretation, but as of this month, that is reportedly finally scheduled to change.

Patrick K. O’Donnell is a bestselling, critically acclaimed military historian and an expert on elite units. He is the author of twelve books, including The Indispensables, which is featured nationally at Barnes & Noble, Washington’s Immortals, and The Unknowns. He is the featured speaker at Washington’s Crossing on December 12 and will participate in the annual reenactment and crossing of the Delaware River. O’Donnell served as a combat historian in a Marine rifle platoon during the Battle of Fallujah and often speaks on espionage, special operations, and counterinsurgency. He has provided historical consulting for DreamWorks’ award-winning miniseries Band of Brothers and documentaries produced by the BBC, the History Channel, and Discovery. PatrickODonnell.com @combathistorian