Dozens of Camels Disqualified from Saudi Beauty Pageant for Botox Use

Organizers of a camel beauty pageant taking place near Riyadh, Saudi Arabia, this week disqualified at least 43 participants on Tuesday for altering their camel contestants’ appearance “in various ways including injecting Botox into their lips,” Al Arabiya reported.

“Other methods of manipulation included using rubber bands to distort body parts, and using gel implants,” according to the Dubai-based news site.

“The stakes are high, as competition winners can take home a total of $66 million (250 million Saudi riyal) in prize money, and private sales can fetch millions of dollars,” Al Arabiya observed.

ICYMI: Organizers of the King Abdulaziz #Camel Festival carry out the biggest bust of #Botox cheats in the event’s six-edition history, according to the official SPA news agency.https://t.co/FBmMNd6bpm

Saudi Arabia’s Camel Club organized this year’s King Abdulaziz Camel Festival, which launched on December 1 just outside of Riyadh, Saudi Arabia’s capital and financial center. The event’s organizers told the state-run Saudi Press Agency (SPA) on December 8 “the high number of violators found” serves as evidence of the Camel Club’s “strength and strictness” in combating efforts to cheat during the competition.

Camels competing in the King Abdulaziz beauty pageant must undergo a number of rigorous evaluations before they may be considered finalists for the contest’s million-dollar prizes.

Camels competing in the King Abdulaziz Camel Festival have been accused of Botox tampering since at least 2018, according to the BBC:

“In the lead up to the festival, Saudi media reported that a vet had been caught giving camels plastic surgery including Botox injections and reducing the size of their ears,” the British broadcaster reported of the event in January 2018.

“They use Botox for the lips, the nose, the upper lips, the lower lips and even the jaw,” Ali Al Mazrouei, 31, the son of a top Emirati camel breeder told the National on January 23. 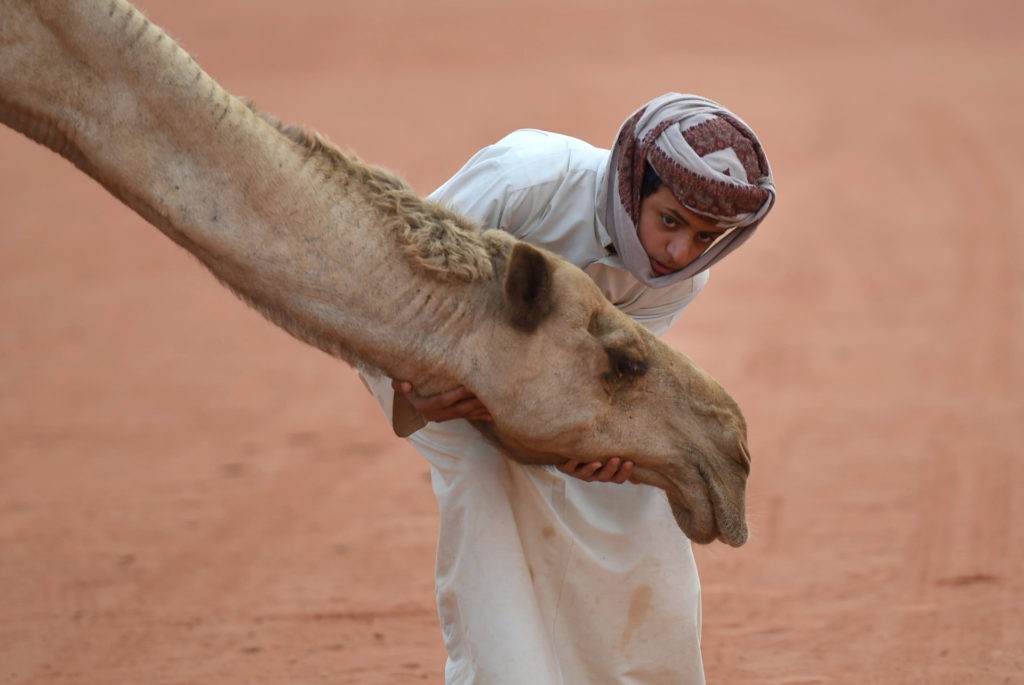 A Saudi boy poses for a photo with a camel at the annual King Abdulazziz Camel Festival in Rumah, some 150 kilometres east of Riyadh, on March 29, 2017.
The 28-day King Abdulaziz Camel Festival features a camel beauty contest, known as Miss Camel with prizes amounting to $30 million. (Photo credit should read FAYEZ NURELDINE/AFP via Getty Images)

“It makes the head more inflated so when the camel comes it’s like, ‘Oh look at how big is that head is. It has big lips, a big nose,'” he explained to the United Arab Emirates (U.A.E.)-based newspaper.

“What distinguishes a beautiful camel is not just its height, shape and the placement of its hump,” the National noted at the time.

“A full, droopy lip and large features are essential to achieving camel celebrity-status in the multi-million dollar industry of camel pageantry,” the publication detailed.

The Camel Club describes the King Abdulaziz Camel Festival as “the world’s largest” camel beauty pageant. The event has convened since 2017 as “an annual cultural, economic, sports and entertainment festival in Saudi Arabia under royal patronage,” according to the event’s state-run website.

The King Abdulaziz Camel Festival aims to “consolidate and strengthen the camel heritage in the Saudi, Arab and Islamic culture and provide a cultural, tourist, sports, leisure and economic destination for camels and their heritage,” the website states.

The event is one of several camel beauty pageants across the Middle East celebrating “the traditional Bedouin heritage of the Gulf, which placed a high level of importance on the desert-dwelling dromedaries,” according to Al Arabiya.