Two senior medical officers have, shockingly, said out loud what a lot of ordinary people already noticed: Australia is sliding inexorably towards a ‘New World Order.’

We will be looking at what contact tracing looks like in the New World Order and yes, it will be in pubs and clubs and other things…

The clip has already had over one million views, causing Twitter to issue a Snopes-style fact-check correction, headlined ‘Unfounded claims about the ‘New World Order’ conspiracy theory are shared after an Australian governmental official used the expression during a press conference on Thursday’.

Twitter goes on to libsplain that there is nothing remotely dubious about this perfectly innocent phrase.

Fact-checkers have regularly debunked claims connected to the conspiracy theory. The phrase is commonly used to describe times of change or cultural shift. 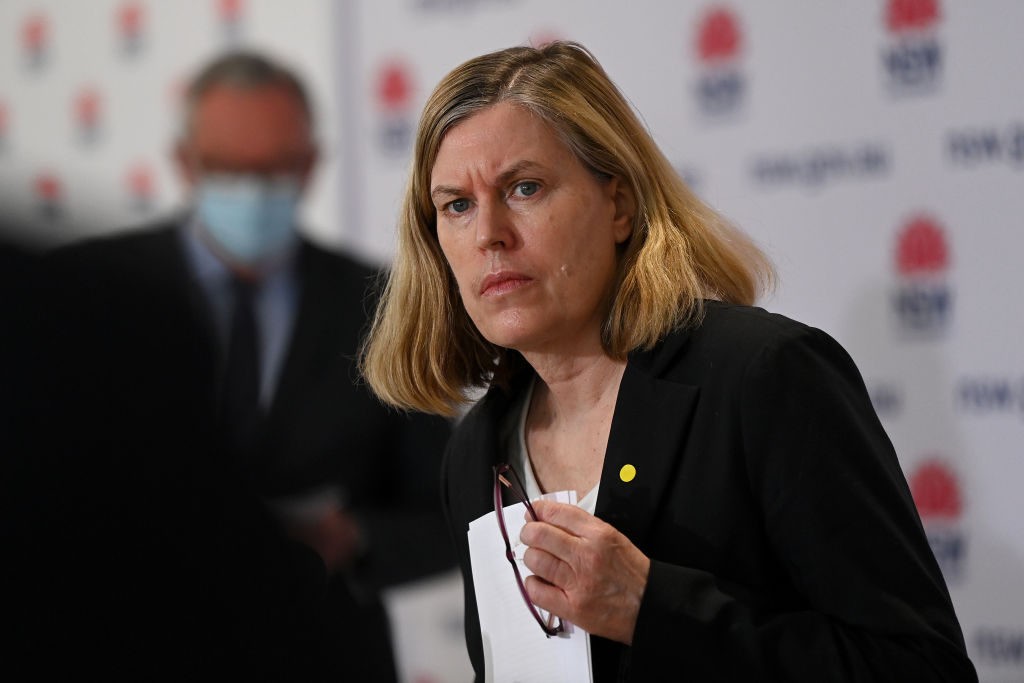 NSW Chief Health Officer Dr Kerry Chant speaks to the media during a COVID-19 press conference on September 9, 2021 in Sydney, Australia. Parts of regional NSW currently deemed low risk and which have seen zero COVID cases for at least 14 days will emerge from lockdown at 12:01am Saturday September 11. (Bianca De Marchi – Pool/Getty Images)

This kind of language has been tamped down after it caused concerns in previous generations. George HW Bush used the phrase in a speech on September 11, 1990. (Facebook now accompanies the clip with a health warning: ‘The New World Order is a conspiracy theory which hypothesizes a secretly emerging totalitarian world government.’)

And in 1992, a Senator named Joseph R Biden Jr wrote an article for the Wall Street Journal headlined ‘How I Learned to Love the New World Order’.

You may have instead recently heard the euphemisms ‘Great Reset’ or ‘Build Back Better’ — that is, until the unwashed peasants started treating them with suspicion, as well.

For whatever reason, the phrase seems to be especially popular in NSW, Australia right now, because it isn’t just the state’s Chief Health Officer who has been using it. So too has NSW Health Minister Brad Hazzard.

‘That’s the way it is. We’ve got to accept that this is the New World Order,’ says NSW Health minister Brad Hazzard. Yes, he really did say that.

Australia has some of the most draconian lockdown policies anywhere in the world right now. Indeed, as this Twitter thread from Maajid Nawaz suggests, the land they once called ‘the Lucky Country’ is now starting to look like a very unlucky totalitarian tyranny.

Among the scary features it has introduced in the last 18 months are: Quarantine camps.

CCP style surveillance in the form of “Forced” facial recognition & geolocation scanning sent to the government within 15 mins of a text:

Passing a law in which the State can now take control of your online accounts:

Putting quarantine signs on people’s doors as if they were Medieval plague victims:

Denying services to the unvaccinated and treating them like pariahs:

5) denying services & “locking out” the unvaccinated to “protect the health service” https://t.co/layzICGv9E

Shooting dogs to show everyone who is boss:

6) shooting dogs to show you they mean business: https://t.co/ZBPytvh6gL

And, the final insult, deciding how much beer you are allowed to drink in your home prison…

Having locked you in, built “quarantine” camps, insisted you scan your face & respond with your geolocation within 15 mins of a text, accessed your data, locked the unvaxxed out of services & shot dogs to show you they mean it, now Australia begins rations https://t.co/bz15i0jpQ9

No, I’m quite sure Facebook’s and Twitter’s warnings were absolutely correct. Now that they’ve warned that this ‘New World Order’ thing is just a conspiracy theory, I’m sure we can all sleep much more safely in our beds at night.