Former Afghan President Hamid Karzai and a mujahideen leader known as the “Butcher of Kabul” established a “council” this weekend to help the Taliban build a new government and secure the peaceful transition of power.

The Taliban, which ran Afghanistan prior to the U.S. invasion in 2001, returned to power on Sunday after a rapid series of military victories nationwide beginning in April. That month, President Joe Biden announced he would break a deal that predecessor Donald Trump that would have seen American troops leave the country in May; in response, the Taliban announced it was not beholden to the deal and began seizing the country from the government of President Ashraf Ghani province by province. 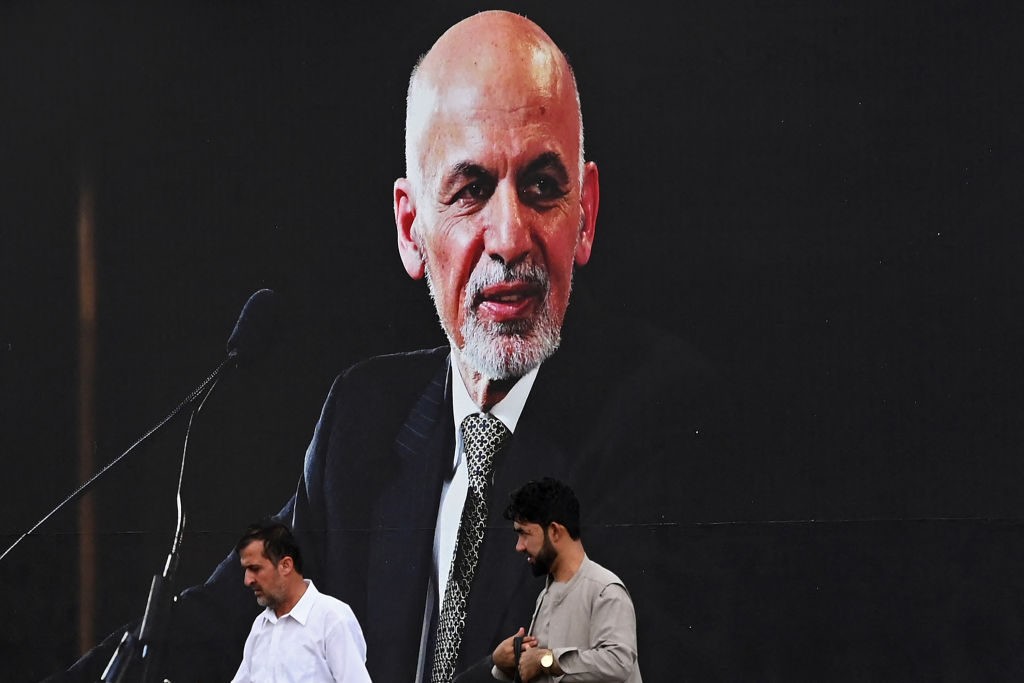 People walk past a poster of Afghanistan’s President Ashraf Ghani at the Hamid Karzai International Airport in Kabul on July 16, 2021. (SAJJAD HUSSAIN/AFP via Getty Images)

The Taliban returned to Kabul on Sunday and took over the presidential palace. There, Taliban leaders formally declared victory in the war for Afghanistan and proclaimed the restored Islamic Emirate of Afghanistan, the insurgent group’s formal name for the government it has always claimed to be legitimate.

Ghani fled the country on Sunday morning. The Russian embassy asserted, citing undisclosed eyewitnesses, that he and his entourage fled with so much money it required four cars and a helicopter to transport it. Ghani’s departure has rendered Karzai the most influential non-Taliban politician currently in the country.

Karzai and former Chief Executive Abdullah Abdullah, Ghani’s number-two man, appeared in a video message on Monday announcing they had put together a “Coordination Council” along with mujahideen leader Gulbuddin Hekmatyar to ensure a smooth transition of power out of the Ghani era for the Taliban. According to Afghanistan’s Tolo News, the two leaders said in their message that they sought a return to normalcy under the Taliban and are actively in talks with the jihadist organization.

Karzai and Abdullah said that along with Gulbuddin Hekmatyar they are in talks with the Taliban leadership to achieve countrywide peace and security in Afghanistan.

Their main effort is to maintain calm in Kabul, they said.

Abdullah received the invented position of chief executive in Ghani’s government as part of a power-sharing agreement following the contentious 2014 election. He later became chairman of the High Council for National Reconciliation.

Hekmatyar, nicknamed the “Butcher of Kabul” for his alleged involvement in war crimes during the 1990s civil war, fought against the U.S.-backed government for 15 years before signing a peace treaty in 2016 and launching an unsuccessful bid for the presidency years later. After returning from exile, he urged his Taliban “brothers” to emulate him and seek reconciliation with Kabul.

The video posted Monday followed a formal announcement from Karzai on Twitter of the new “council.” Karzai claimed the group aimed “to prevent chaos and reduce the suffering of the people and to better manage the affairs related to peace.”

Hekmatyar announced the trio were preparing to head to Doha, Qatar, on Monday, Al Jazeera reported. The Taliban has maintained its headquarters there for years and the country previously played host to the ill-fated peace talks between the insurgent group and the now-defunct Islamic Republic.

It remains unclear with whom they intend to negotiate as Taliban co-founder Mullah Abdul Ghani Baradar, whom the group has tapped to lead the country, was reportedly bound for Afghanistan as of Tuesday morning. 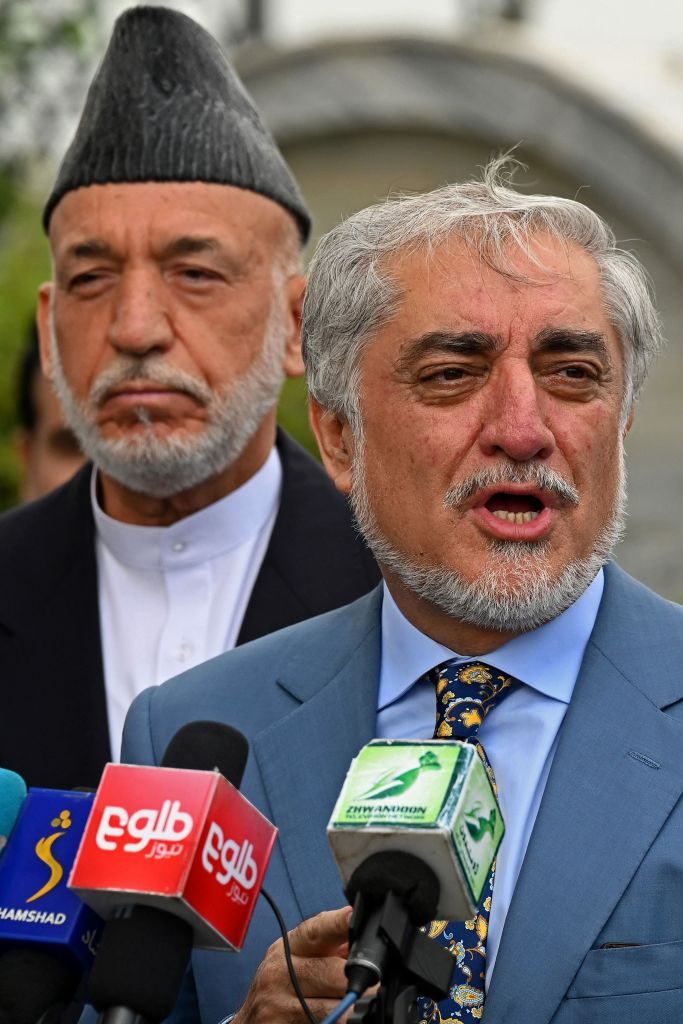 Karzai’s 13-year tenure as president of Afghanistan lasted from 2001-2014 and was defined by widespread corruption and an unprecedented boom in the country’s opium trade. Leaked official documents the Washington Post published revealed Karzai’s government “self-organized into a kleptocracy.”

Many of the former president’s brood received plush government positions for which they had no qualifications and enriched themselves while in office.

As the capital city was falling to the Taliban, Karzai made a video plea to the group for peaceful conduct, appearing alongside his young granddaughters. “I am here in Kabul with my girls and I ask the Taliban to provide security and safety for the people,” he said, according to NDTV.

He re-emerged after leaving office as a vocal critic of the U.S. withdrawal and an avid supporter of Chinese influence in the country. In June and July, Karzai regularly gave interviews blasting the U.S. and praising China.

He told the Associated Press on June 20 that America’s legacy in the country was one of “total disgrace and disaster.” In an July 3 interview with the Hindu, he blamed the U.S. for the rise of ISIS in the country, asserting there was no terrorism in Afghanistan prior to the U.S. invasion.

Look at our condition. Look at where we are, just a month and a half ago, more than 85 Afghan schools, girls, young girls and teenagers were killed and this was claimed by the ISIL or Daesh. And Daesh emerged during the presence of the US and NATO forces against the mission that they had proclaimed.

To the Chinese state media outlet Global Times, he asserted on July 2 that the “failure by the US and its allies is now their responsibility to explain to the Afghan people,” before describing China as “a very constructive player for peace and stability of Afghanistan.” Karzai also expressed hope China could work for the “betterment of relations between Afghanistan and Pakistan.”

Beijing has held talks with the Taliban and expressed hope that a Taliban government will ally with the Communist Party. Both Taliban and Chinese regime leaders have expressed interest in bringing Afghanistan into China’s orbit through Belt and Road Initiative (BRI) projects. China aims to rebuild the ancient Silk Road trade routes between western Europe and Asia through BRI by offering poor nations predatory loans to build infrastructure, then seizing the project when the debtor nation inevitably defaults. Afghanistan’s raw mineral wealth and strategic location near Chinese ally Iran make it a high priority target for Beijing.

In addition to China, Iran appears to be supporting the Karzai effort. Iranian Foreign Minister Mohammad Javad Zarif on Sunday tweeted that “Iran welcomes announcement by [Hamid Karzai] on forming a Coordination Council by Afghan leaders.”

He then emphasized the importance of securing a “peaceful transition.”

Iran welcomes announcement by @KarzaiH on forming a Coordination Council by Afghan leaders.

We hope that it can lead to dialogue & a peaceful transition in Afghanistan.

Ben Whedon is an editor/reporter for Breitbart News. Write to him at This email address is being protected from spambots. You need JavaScript enabled to view it. or follow him on Instagram.