A six-year-old Pennsylvania girl is battling a rare form of cancer and her father’s coworkers have come up with a clever way to raise money for her family: “The Fat & Furious Hundred-Yard Dash.”

Adaleigh Evans and her parents recently discovered a lump on her shoulder and in October, she was diagnosed with a rare form of cancer, according to WNEP.

“You don’t ever want to see your kids in any type of pain,” her father Brandon said. “So it was a very, very emotional time and it still is.”

Brandon works as a corrections officer near the family’s home in Waymart and recently learned of a fundraiser his coworkers put together.

His colleagues Justin Gisinger, Wilfredo Mieja, and Marc Fenkner put together “The Fat & Furious Hundred-Yard Dash,” where the three men planned to race each other and collect donations for Brandon’s family during tumultuous times.

“I’m like what is this? You know? And I don’t like … this this this has to be a joke, and they were like no, like they stepped up and they wanted to do this for you guys,” Brandon said.

“We are giant family inside of there. When one of us hurts we all hurt. So you got to step up and help your fellow comrades,”  Marc Fenkner said. 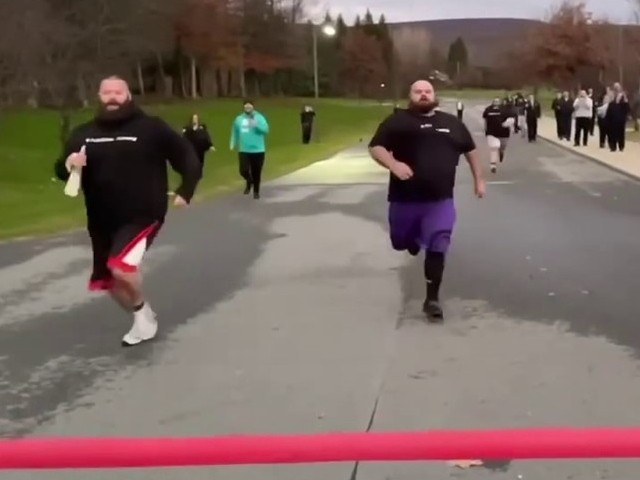 Rundown: Correctional officers are happy to do their bit for Adaleigh Evans in the Fat & Furious Hundred-Yard Dash.

The three men raced each other on Sunday after a shift and those in attendance donated money to benefit Addie. A box of donuts awaited the winner of the race at the finish line.

“We put ourselves out there and made a fool of ourselves, me wearing a cape and all that you know, just for Addie, but it could be anything more than that. Something much bigger for everyone in the world,” Wilfredo said.

The men have challenged other shifts of corrections officers to race one another and the winners will square off in a 100-yard dash.

Addie was treated with a triple-dose of chemo on Monday, but her mother Jena says she has not lost her sense of humor.

“Keep the smile on her face. That’s that’s one of the biggest thing. I mean, we’re really just taking it day by day. That’s all you can do right now,” Jena told WNEP.

The family has a GoFundMe page called Addie’s Army fighting childhood cancer. The family has already exceeded its goal of $5,000, as 215 donors raised $13,145 as of November 20.