Coronavirus in Retreat: Global Case Counts Plunge 17% in Past Week

The weekly epidemiological report from the U.N. health agency outlines the omicron variant is increasingly dominant — making up nearly 97 percent of all cases tallied by the international virus-tracking platform known as GISAID. Just over three percent were of the delta variant.

The new statistics come as calls grow around the world for an end to mask mandates and compulsory vaccinations, as Breitbart News reported.

All told, W.H.O. reported more than 19 million new cases of coronavirus and under 68,000 new deaths during the week from Jan. 31 to Feb. 6. As with all such tallies, experts say such figures are believed to greatly underestimate the real toll.

Case counts fell in each of W.H.O.’s six regions except its eastern Mediterranean zone, which reported a 36 percent jump, notably with increases in Afghanistan, Iran and Jordan. 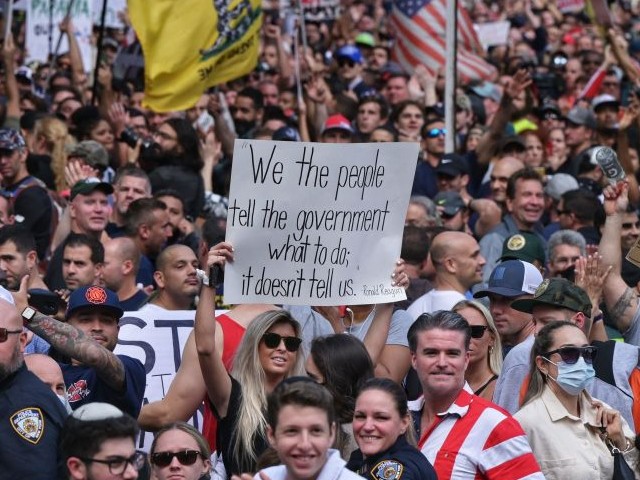 Municipal workers take part in a demonstration to protest against the coronavirus vaccine mandate, in New York on October 25, 2021. (ED JONES/AFP via Getty Images)

The news of the decline in case counts comes as governments around the world look to wind back their restrictions.

Australia will soon reopen its borders to vaccinated visitors. Sweden is lifting most pandemic regulations, following in the footsteps of Denmark and Norway.

Just this week, the governors of California, Connecticut, Delaware, New Jersey and Oregon said they would end statewide indoor mask mandates, some of which applied to schools and others to public places, the New York Timesreports.

In Canada the drive for freedom from all coronavirus restrictions has made global headlines.

Not every U.S. state is keen to end the restrictions, however.

As Breitbart News reported, Los Angeles County will retain its indoor mask mandate past the February 15 date set Monday by Gov. Gavin Newsom as the date to end a statewide mandate, according to public health officials in the county.

The state will still require unvaccinated people to wear masks indoors after Feb. 15, at the risk of stigmatizing all those who wish to wear masks as a precaution.