AFP — Questions mounted on Friday about the health of 95-year-old Queen Elizabeth II after she had tests and spent a night in hospital, despite royal officials saying she was resting at home.

Buckingham Palace said on Wednesday morning that she pulled out of a planned engagement in Northern Ireland and had been advised to rest on medical advice.

But royal officials conceded late on Thursday that she had in fact had “some preliminary investigations” in hospital on Wednesday, and stayed overnight, after The Sun newspaper broke the news.

She returned from King Edward VII’s Hospital in central London to her Windsor Castle home west of the capital and was said to be “in good spirits”.

Prime Minister Boris Johnson sent his best wishes, his spokesman said, while members of the public near her Buckingham Palace home in central London said they were unperturbed.

Kirsty Duffield, an operations manager, told AFP health checks were “quite normal” at the Queen’s age and it was “really positive” that she was released so quickly.

Housewife Katie Lavin pointed out the monarch was still riding horses and appeared strong and independent, even though it was clear she was “getting a little bit fragile”.

Visiting US theatre director Charles Fee said she would be described as “a tough broad” across the Atlantic. 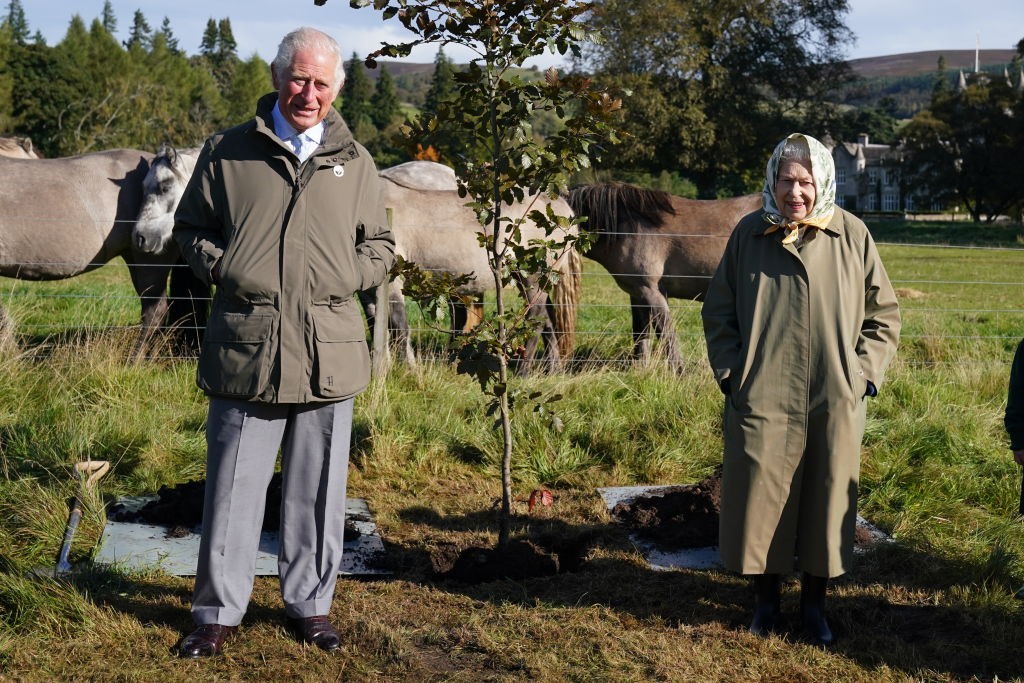 CRATHIE, UNITED KINGDOM – OCTOBER 1: Queen Elizabeth II and Prince Charles, Prince of Wales (known as the Duke of Rothesay when in Scotland) pose after planting a tree at the Balmoral Cricket Pavilion, to mark the start of the official planting season for the Queen’s Green Canopy (QGC), on October 1, 2021 near Crathie, Scotland. The QGC is a UK-wide Platinum Jubilee initiative which will create a lasting legacy in tribute to the Queen’s 70 years of service to the nation, through a network of trees planted in her name. (Photo by Andrew Milligan-WPA Pool/Getty Images)

Britain’s Press Association news agency said the hospital visit and stay was not initially disclosed because it was expected to be short, and to protect her privacy.

She stayed overnight for “practical reasons”, said to be because it was too late to make the 26-mile (42-kilometre) trip back to Windsor.

The Queen has previously been treated at the exclusive private clinic, which is known for treating the royal family, including in 2013 for gastroenteritis, when she also stayed for one night.

The development follows several busy weeks during which the monarch undertook more than a dozen public engagements, including hosting a reception on Tuesday for global business leaders at Windsor Castle.

Royals author Robert Hardman told the BBC there would be “a mild degree of irritation at the palace this morning” that news of the queen’s hospital stay had become public.

“There’s a concern to maintain the dignity of the office,” Hardman said, adding officials had likely feared “huge banks of cameras and 24-hour news setting up outside the hospital”.

However, veteran BBC royal correspondent Nicholas Witchell said royal officials “have not been giving us a complete, reasonable picture of what has been occurring”.

“Rumours and misinformation proliferate (and) thrive when there is an absence of good, proportionate, trustworthy information.

“We must hope that we can rely on what the palace is now telling us,” he added, calling assurances that the queen was in good spirits “a handy phrase that the palace dusts off at moments such as this”.

“Royal sources had been keen to encourage the impression that she had just overdone it but may struggle to convince the public now,” he said.

Queen Reflected on ‘Deep and Abiding Affection’ She and Late Husband Had for Scotland https://t.co/qh9OnMnW3u

The queen is head of state in the UK and 15 other realms around the world, including Australia, Canada and New Zealand.

Preparations are already under way to celebrate her Platinum Jubilee next year, marking her 70 years on the throne.

The palace said she was back at her desk on Thursday afternoon undertaking “light duties”.

The disclosure, however, will inevitably raise fears for her health and the toll of her public duties given her advanced age.

Her late husband, Prince Philip, died in April just a few weeks before his 100th birthday, months after spending four weeks in hospital.

The monarch, who still rides and drives on her private estates, has been especially active since returning from her Balmoral estate in northeast Scotland at the start of October.

Last week, she was seen for the first time at a major public event using a walking stick, but royal officials said it was not linked to any specific health condition.

She is still expected to attend a series of events linked to the upcoming UN climate summit in Glasgow next month.

“She hates people making a fuss of her in general but particularly to do with health,” added Hardman.

“But it’s a reflection of the enormous affection and concern the whole country has for her, and the fact that every news bulletin and newspaper is leading on it reflects that.”