Allegations by Prince Harry and Meghan Markle that Britain’s royal household is racist at its base are so serious critics Tuesday said Buckingham Palace must respond and not let the matter rest.

But that response is likely being delayed by Queen Elizabeth II’s need to balance her sometimes-conflicting roles as monarch and grandmother, Angela Levin, author of Harry, a Biography of a Prince, told the Associated Press.

She maintains there’s little doubt ultimately the 94-year-old monarch will make her decision based on what’s best for the 1,000-year-old institution she has led since 1952.

“The queen has a motto: Never complain, never explain,’’ Levin told AP. “And she’s stuck with this for four decades. But I think in this climate and 2021, everything goes everywhere. There’s so much social media that in this instance, she really can’t not say anything.”

As Breitbart News reported, Meghan used her Sunday night U.S. television interview with Oprah Winfrey to allege the British royal family expressed concerns about the color of her son’s skin ahead of his birth.

Meghan said when she was first pregnant with son Archie, there were “concerns and conversations about how dark his skin might be when he’s born.” The statement prompted Winfrey to incredulously ask “What?”

Meghan Markle Claims Royal Palace Had ‘Concerns’ About How Dark Her Son’s Skin Might Be https://t.co/FEFnJVxyb1

The Times of London reported Tuesday a palace statement had been delayed because the queen wanted more time to consider her position.

The newspaper didn’t cite a source for the information, but affirmed the Queen refused to sign off a prepared statement that officials had hoped would de-escalate tensions by highlighting the family’s love and concern for the couple.

Robert Buckland, the justice secretary, said: “I think that the Queen epitomises public duty and public service and we all look up to her and admire her for that as we do other members of the royal family who work hard.”

He told local outlet Sky News: “That element of public duty is at the heart of what makes the monarchy work here in the United Kingdom.”

Charles Anson, a former press secretary to the Queen, said 24-hours earlier the couple raised “issues that need to be looked at carefully,” but claimed to the BBC there “wasn’t a strand of racism” within the royal household.

But Julie Montagu, Viscountess Hinchingbrooke, told the BBC their revelations were “astounding,” and as an American woman who married into British aristocracy, she could relate to Meghan’s descriptions. 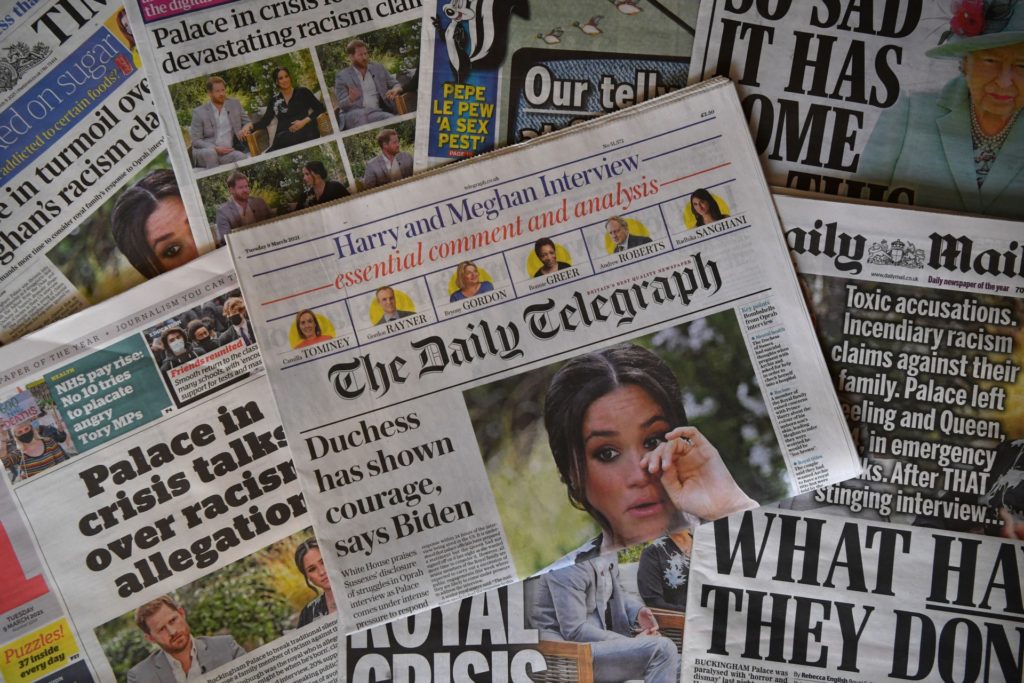 An arrangement of UK daily newspapers photographed as an illustration in Brenchley, Kent on March 9, 2021, shows front page headlines reporting on the story of the interview given by Meghan, Duchess of Sussex, wife of Britain’s Prince Harry, Duke of Sussex, to Oprah Winfrey, which aired on UK broadcaster ITV. Britain’s Queen Elizabeth was in crisis talks on March 9, 2021, after Prince Harry and his wife Meghan lifted the lid on life inside Buckingham Palace with an explosive interview that reverberated around the world, local media reported. (BEN STANSALL/AFP via Getty Images)

“You don’t really know until you’re in it, and I think that she made that very well known last night in her interview,” she said.

The two-hour Oprah interview was screened on ITV on Monday night attracting 12.4m viewers at its peak – the broadcaster’s biggest audience since the 2019 Rugby World Cup final – while it was viewed by an average of 17.1m in the U.S. the previous day.