U.S. Secretary of State Antony Blinken has deleted a statement posted to his official Twitter account on Thursday that said the U.S. would “stand with the people of Hong Kong,” the South China Morning Post reported Friday.

Beijing should let the voices of all Hong Kongers be heard. The PRC [People’s Republic of China]’s disqualification of district councilors only weakens Hong Kong’s long-term political & social stability. We stand with the people of Hong Kong and continue to support their human rights & fundamental freedoms.

The U.S. Secretary of State replaced the statement with a more muted tweet posted later on September 16:

The PRC’s disqualification of seven pro-democracy district councilors undermines the ability of people in Hong Kong to participate in their governance. Governments should serve the people they represent. Decreasing representation goes against the spirit of Hong Kong’s Basic Law.

Both of Blinken’s messages referenced the recent disqualification of seven Hong Kong district councilors by pro-China elements within the city’s government. Hong Kong’s government said it relieved the district officials of their civic duties after determining that they had recently provided “invalid” loyalty oaths to the Chinese Communist Party (CCP). 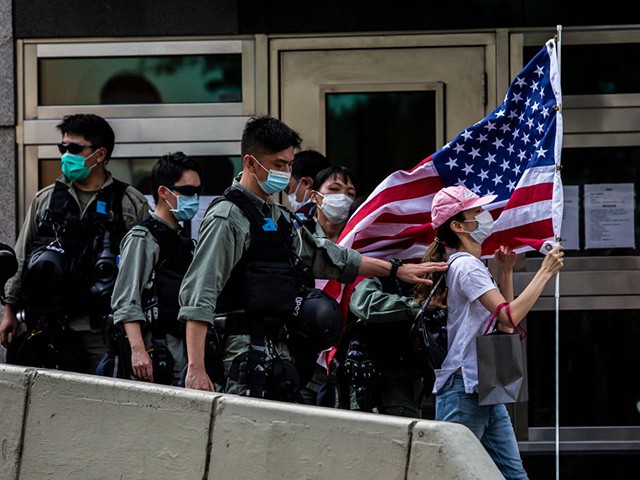 Police remove a woman holding a US flag from outside the US consulate during a march to celebrate U.S. Independence Day in Hong Kong on July 4, 2020. (Photo by ISAAC LAWRENCE/AFP via Getty Images)

“[The seven district councilors] smeared the Chinese central government and the HKSAR [Hong Kong Special Administrative Region] government, stood on the side of anti-China, destabilizing forces in Hong Kong and interfered in Hong Kong affairs and China’s internal affairs as a whole,” a spokesman for the Chinese foreign ministry’s Hong Kong office said in a statement issued September 17.

The statement seemingly addressed Blinken’s tweets on September 16, with the Beijing mouthpiece writing:

It is sheer hypocrisy and [a] double standard that the US vilifies the just measure of the HKSAR government, even as it itself has an “iron net” system to require public officers to swear allegiance at home, and disqualifies lawmakers for violating parliamentary rules. 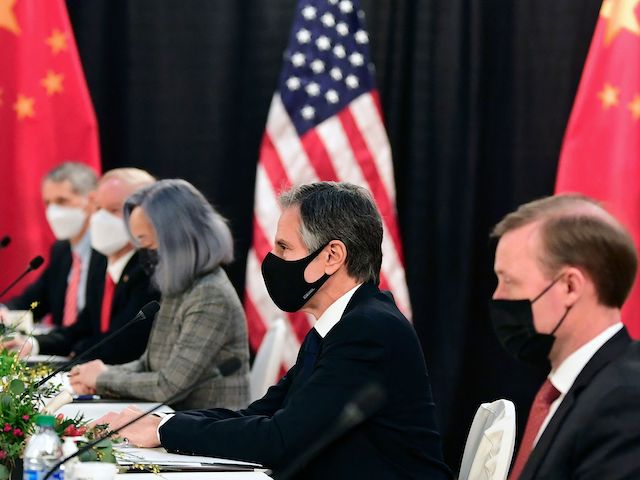 The US delegation led by Secretary of State Antony Blinken (C), flanked by US National Security Advisor Jake Sullivan (R), face their Chinese counterparts at the opening session of US-China talks at the Captain Cook Hotel in Anchorage, Alaska on March 18, 2021. (Frederic J. Brown/AFP via Getty Images)

Hong Kong’s Legislative Council passed a bill in May that requires members of the city’s 18 district councils to pledge an oath of loyalty to the Basic Law, or Hong Kong’s de facto constitution, which states that Hong Kong is a part of China.

The director of the Hong Kong and Macao Affairs Office of China’s State Council, Xia Baolong, said Hong Kong should be ruled by “patriots” only when he introduced the legislation in February. The term “patriot” includes “people who love China, its constitution and the Communist Party and excludes anti-China ‘troublemakers,'” Xia said at the time.