The government of India’s national capital territory, Delhi, ordered all schools and colleges in the city to close on Friday until further notice citing air pollution marking the second such mandate in less than three weeks.

“We had reopened schools considering the forecast that air quality would improve. However, the air pollution levels have increased again and we have decided to shut schools from Friday [December 3] till further orders,” Delhi Environment Minister Gopal Rai told reporters on December 2.

Delhi’s government last ordered schools in the capital to shut down for one week on November 15 in an effort to prevent children from exposure to the urban center’s then “dangerously high” levels of air pollution. Delhi officials later extended the in-person class suspension to two weeks after air conditions in the capital failed to improve. The city’s government chose to reopen schools on November 29 after atmospheric pollution in Delhi improved slightly from mid-November, though municipal officials acknowledged at the time that Delhi’s air quality was still “very poor.” Delhi’s schools closed again on December 3 after just four days in session. 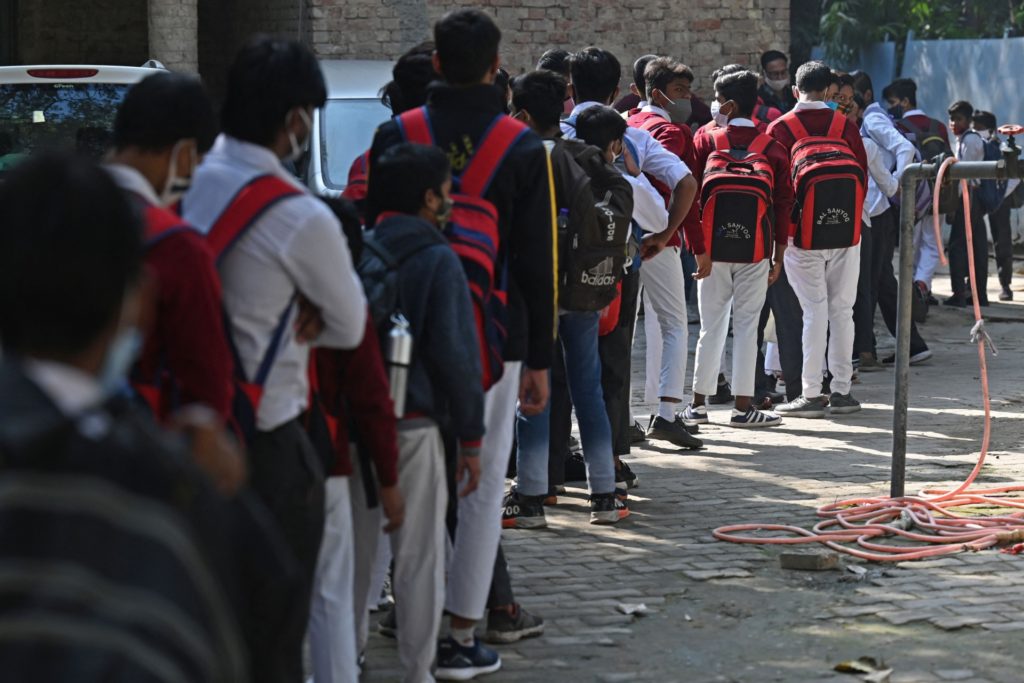 Students stand in a queue to enter their school in New Delhi on November 29, 2021, as educational institutions were reopened after the air quality levels in the city showed improvement. (Photo by MONEY SHARMA/AFP via Getty Images)

Delhi’s government seemingly made a last-minute decision to shutter its schools on December 3 in response to an admonishment it received from India’s Supreme Court on December 2 over its handling of the capital’s ongoing air pollution crisis.

India’s apex court on December 2 questioned why Delhi’s government “allowed the office-going population to work from home while it resumed physical classes for school children, exposing them to the threats of hazardous pollution,” according to the Hindustan Times.

“As the Delhi government informed the court on Thursday that coming to school is voluntary and online classes are also going on, the court observed that if there is an option, people will send their kids to schools,” the newspaper noted.

Ongoing bans on construction and “the entry of diesel trucks with non-essential goods” in the capital will remain in place indefinitely as part of its efforts to curb air pollution levels in the metropolis, Delhi Environment Minister Gopal Rai told reporters on December 2. Rai also urged Delhi residents on Thursday to use public transport to reduce the number of vehicles on the city’s congested roads. He said Delhi’s government recently contracted an extra 700 natural gas-fueled buses to accommodate more public transport passengers. The capital’s government will additionally “intensify various dust-control steps such as using fire trucks to spray water,” Rai told reporters on December 2.