World Health Organization (W.H.O.) Director-General Tedros Adhanom Ghebreyesus will run for a second term at the helm of the organization in May 2022 unopposed, despite presiding over one of the most embarrassing episodes in the history of the agency: the Chinese coronavirus pandemic.

“Proposals will be considered at EB150 in January 2022: following an initial screening the Board will interview the proposed candidates and decide by a secret ballot on the nomination,” the W.H.O. site details. “The nomination will then be submitted to the Seventy-fifth World Health Assembly in May 2022 which will appoint the next Director-General by secret ballot.”

Next year, however, member states will only have one choice: Tedros.

Tedros defeated four other candidates to take over the role in 2017, earning a five-year term with the support of the Chinese Communist Party.

At the time, the W.H.O. was facing global condemnation for its poor management of the West African Ebola outbreak under Tedros’ predecessor Margaret Chan, now a dean at Tsinghua University, dictator Xi Jinping’s alma mater. The W.H.O. catastrophically failed to contain the Ebola outbreak despite the fact that the disease is not airborne and requires contact with the blood of an infected person to catch. The outbreak, the largest ever of that virus, lasted from 2014 to 2016 and killed over 11,000 people in Liberia, Guinea, and Sierra Leone primarily, though seven other countries – including America, the U.K., and Spain – documented cases. 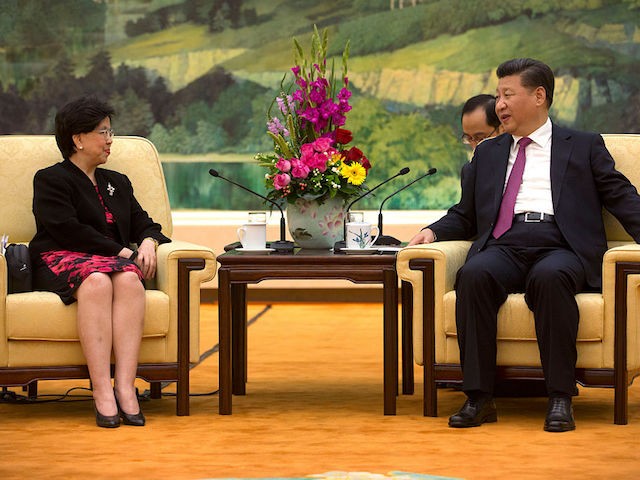 With an African leader, many hoped the W.H.O. would show greater concern and competence in aiding health drives on the continent. Tedros’ nomination to the position was already controversial at the time, however, as he is not a medical doctor, but rather earned a Ph.D. in “community health.” His supporters in the organization, among them reportedly the Chinese government, disregarded this as well as his record as Ethiopian health minister from 2005 to 2012, a highlight of which was his insistence on declaring that cases of cholera in the country had ceased, diagnosing instead cases of “acute watery diarrhea” in patients that exhibited classic cholera symptoms. Tedros also survived concerns regarding his membership in the Tigrayan People’s Liberation Front (TPLF), a Marxist political party with a long history of human rights abuses now engaged in an all-out civil war against the Ethiopian government.

Once in power, Tedros rapidly began raising eyebrows with bizarre political moves elevating communists and socialists. Tedros was immediately, fervently supportive of the Chinese Communist Party, promoting the integration of the United Nations health agency with the Belt and Road Initiative (BRI), a debt-trap plan in which China uses predatory loans to politically control developing nations. Tedros had helped make Ethiopia one of the BRI’s victims while part of the government there, as well. At the W.H.O., Tedros reiterated his support for what China calls the “One China Principle,” the false asserting that Taiwan is a province of China. Taiwan is a sovereign, democratic state – one that Tedros has banned from participating in W.H.O. operations to please China, a move that likely exacerbated the Chinese coronavirus pandemic. 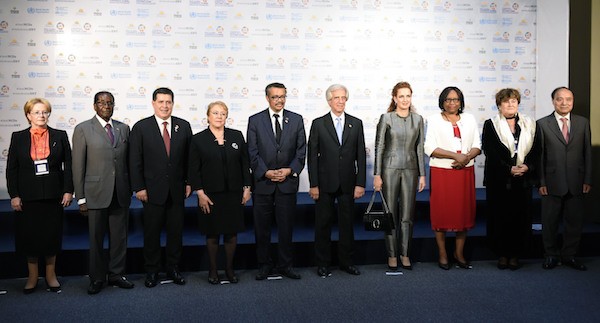 “Her appointment may be regarded as rewarding a country that does not deserve to be rewarded … WHO’s reputation — indeed, its political leverage — depends on the agency’s technical credibility,” an editorial in The Lancet condemning Kasaeva’s appointment at the time ominously asserted.

The Ebola crisis also plagued Tedros, though the disease itself was a minor player in Tedros’ saga. Under Chan, the W.H.O. simply failed to contain the Ebola outbreak in west Africa. Under Tedros, W.H.O. officials actively worsened the situation in the Democratic Republic of Congo during its Ebola outbreak in 2018, committing mass rape and trading sex for drinking water (Ebola can be sexually transmitted).

The W.H.O.’s technical credibility all but collapsed in early 2020, when the Chinese Communist Party began documenting cases of what is now known as Chinese coronavirus in the central metropolis of Wuhan. The first case of Chinese coronavirus, according to leaked government documents, was observed in November 2019 in Wuhan. Local Communist Party officials began an immediate crackdown on anyone noticing anything amiss, most prominently doctors documenting a spike in viral respiratory disease and encouraging fellow health workers to wear masks and wash their hands. Citizen journalists who may have revealed the desperate state of Wuhan also disappeared, many yet to resurface today. By May, the Chinese government had arrested nearly 500 people for merely getting caught discussing the Chinese coronavirus.

The World Health Organization had reason to believe that an infectious respiratory disease was spreading in Wuhan as early as December 2019. On the last day of that year, the government of Taiwan sent an email to Tedros’ agency warning of the spread of “atypical pneumonia” and noting that suspected patients “have been isolated for treatment,” suggesting evidence that the disease was contagious. Yet two weeks later, the W.H.O. published a statement on social media, citing the Chinese Communist Party, claiming, “preliminary investigations conducted by the Chinese authorities have found no clear evidence of human-to-human transmission” of Chinese coronavirus.

Preliminary investigations conducted by the Chinese authorities have found no clear evidence of human-to-human transmission of the novel #coronavirus (2019-nCoV) identified in #Wuhan, #China🇳. pic.twitter.com/Fnl5P877VG

“Taiwan did report our concern on the severity of coronavirus last December to the W.H.O.,” Taiwan’s representative office in the United States said in a statement to Breitbart News in March 2020. “But as a rule, our reporting is always a one-way street. WHO mostly ignored our messages and never shared information as they do to other countries.”

Tedros’ loyalty to the Communist Party had thus tremendously embarrassed the W.H.O. and likely facilitated the evolution of the Wuhan outbreak into a pandemic. The director-general faced no consequences whatsoever for the decisionmaking that led to this, however, and reportedly continued to prioritize Beijing’s interests throughout the pandemic. Tedros repeatedly praised China’s handling of its local outbreak – which notably featured outrageous human rights abuses such as welding people shut in their homes and preventing them from procuring food. The German newspaper Der Spiegel openly accused Tedros in exclusive reporting of taking orders from Xi, reporting in May 2020 that the genocidal Chinese dictator had personally requested that Tedros delay declaring an official pandemic in a phone call. The W.H.O. chief denied the call.

Distraught officials took to leaking their complaints about Tedros anonymously.

“When he refers to China with praise, there is always a grinding of teeth,” an unnamed European envoy told Reuters last year. Another W.H.O. source lamented that Tedros was “naive” and “stubborn” about China.

The humiliation continued when Tedros took a year to send an investigative team into Wuhan to probe the origins of the virus, giving China ample time to destroy critical evidence and boast about it. 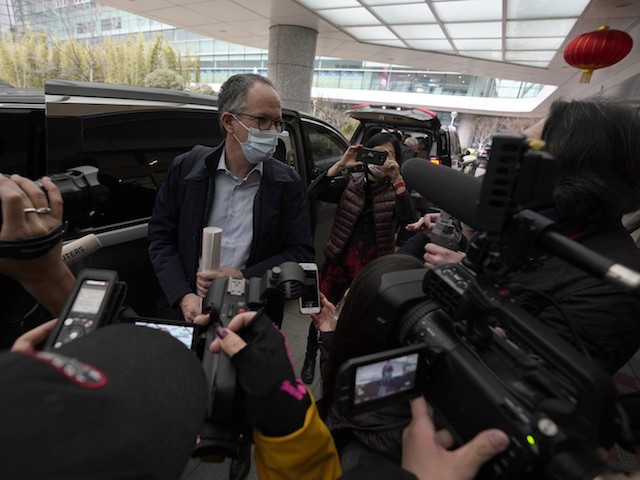 Peter Ben Embarek of the World Health Organization team speaks to journalists as he arrives at the VIP terminal of the airport to leave at the end of the WHO mission in Wuhan in central China’s Hubei province on Wednesday, Feb. 10, 2021. (AP Photo/Ng Han Guan)

The Wuhan report, concluding that the virus had originated in wild animals while admitted researchers had found zero samples of Chinese coronavirus in 80,000 wild animal samples, was so poorly executed that Tedros himself criticized it as insufficiently “extensive” and publicly requested a more thorough investigation into the Wuhan Institute of Virology, a local lab studying bat coronaviruses when the pandemic began. No evidence suggests that Tedros used his power as the head of the world’s largest public health organization to actually enact any such investigation.

Currently, the W.H.O. response to coronavirus is flailing aimlessly, the agency increasingly losing influence around the world. Tedros is engaged in a war of words with the leaders of America and Europe over booster vaccinations, crying to deaf ears that booster programs are “likely to prolong the pandemic” because every third shot in one person could have gone to protecting someone not inoculated at all. Tedros’ agency also demanded countries cancel Christmas celebrations, receiving a tepid response.

Tedros has fallen up into an uncontested election, all but guaranteeing that he will continue to run the world’s most powerful health agency through at least 2027. Not a single member nation considered nominating someone else to challenge Tedros’ record. And with no re-election to worry about, Tedros will operate with a mandate to make his record even worse.