Missing Chinese tennis star Peng Shuai appeared in mysterious photos this weekend that included an image of Winnie the Pooh, who has become a symbol of resistance against communist dictator Xi Jinping, Australia’s ABC News reported on Wednesday.

The photos surfaced online through a Chinese state propagandist on Twitter, a social media outlet the regime bans most Chinese citizens from using. Shen Shiwei claimed that Peng had posted the images, all of them showing Peng surrounded by stuffed animals, on her WeChat account. WeChat is a Chinese regime-controlled communication app.

The alleged WeChat photos, along with undated videos from the state propaganda outlet Global Times and a bizarre, partially blurred photo of an alleged video conversation with Peng from the International Olympic Committee (IOC), are the only existing evidence at press time that Peng is alive and safe. Peng, a Wimbledon and French Open doubles champion, disappeared this month after posting an explosive update to Weibo, China’s regime-controlled alternative to Facebook, in which she accused former Chinese Vice Premier Zhang Gaoli of raping her. The post disappeared from Weibo almost immediately, as did Peng from public life.

In addition to accusing Zhang of raping her, she wrote that their first encounter led to a long-term affair apparently tolerated by his wife. Peng repeatedly references her hatred of herself, writing, “I shouldn’t have come into this world, but I didn’t have the courage to die.”

The severity of Peng’s apparently grief in the post has left many baffled regarding instances in Chinese regime-controlled media that Peng is simply “fine.” The images posted this weekend appeared to show a happy Peng frolicking among stuffed animals. The images notably made the rounds on WeChat and Twitter, not Weibo, where discussion of Peng’s disappearance has been nearly non-existent.

The image of Peng holding a panda, a creature the Communist Party often uses in its propaganda, also featured in the background a framed photo of Peng with Winnie the Pooh. The appearance of the cartoon character has led some China experts to speculate, ABC News reported on Wednesday, that Peng was actively attempting to tell the world that she remained a hostage. Left unexplained is how such an image evaded Chinese censors, who routinely scrub social media of images of Winnie the Pooh to avoid offending Xi.

Academic China expert – and victim of Chinese censorship via Bloomberg News – Leta Hong Fincher described the appearance of Pooh in her images as a “distress signal.”

China has at times banned images of Winnie the Pooh for looking like Xi Jinping, so these government-released images of Peng Shuai are a distress signal. #WhereIsPengShuaipic.twitter.com/JP3JNOXxH9

Peng also appears wearing Adidas, a brand that faced a short-lived boycott in China this year for announcing it would attempt not to use cotton picked by slaves in China. Xi has imprisoned millions of members of Muslim ethnic minorities in concentration camps, shipping many to cotton fields to engage in slave labor.

Chinese communist regime censors banned Pooh in 2017 after a photo of Xi and Obama began circulating on social media alongside an image of Pooh and his cartoon friend Tigger.

The photos compared the tall, slim Obama to Tigger and the short, potbellied Pooh to Xi. Xi’s apparent sensitivity to jokes about his figure emboldened dissidents to substitute Pooh for Xi in critical text and artwork, turning the Pooh image into an international symbol against communism.

Xi has continued to attempt to censor the honey-loving bear, including outside of China’s borders. In 2018, during a visit by Xi to the country, Spanish authorities banished a street performer dressed as Winnie the Pooh from Madrid’s Sol Square because Xi’s motorcade was about to pass through.

“I didn’t make a fuss about it. It was only 20 or 30 minutes. If it’s offensive, I understand that they would ask me to step aside,” the performer said at the time. 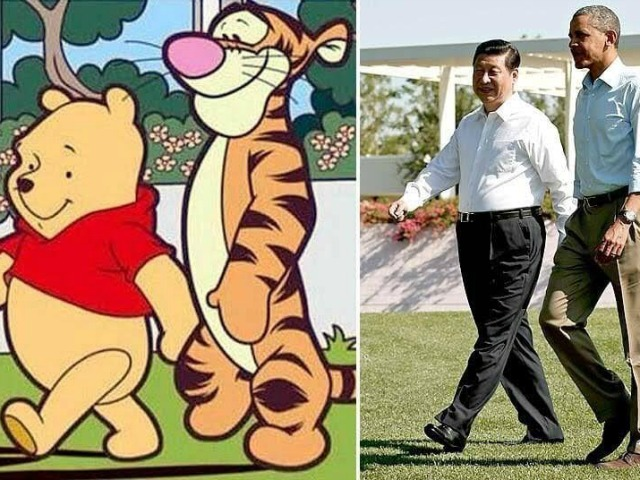 Chinese communist regime censors banned Pooh in 2017 after a photo of Xi and Obama began circulating on social media alongside an image of Pooh and his cartoon friend Tigger.

In contrast, the administration of former President Donald Trump made clear it was aware of the Pooh meme in 2020, when then-Secretary of State Mike Pompeo posted a photo on social media of his dog chewing on a Winnie the Pooh stuffed animal – an image many considered a reference to China.

More recently, NBA star Enes Kanter wore sneakers on the court with his team, the Boston Celtics, sporting an image of himself holding the severed head of Winnie the Pooh, a direct reference to Xi. Kanter launched a campaign this month against the Chinese Communist Party’s extensive list of human rights abuses.

Winnie the Pooh has also begun to surface in critical art specifically demanding safety and freedom for Peng Shuai.

The tennis world has aggressively embraced Peng’s cause, resulting in nearly every major star in the sport issuing statements expressing concern for her safety. The Women’s Tennis Association (WTA) has threatened to withdraw its business from China, estimated to be worth millions, if Beijing does not adequately address the situation.

WTA chairman Steve Simon has dismissed the bizarre images from this weekend and a strange alleged email from “Peng” published by Chinese regime media as insufficient proof of her safety.

Where is Peng Shuai?. #PengShuai#CCPChina#XiJingping#poohpic.twitter.com/oUoNSOAY8k

In contrast, the International Olympic Committee (IOC), scheduled to hold the 2022 Winter Olympics in Beijing in February, published an undated photo that allegedly showed its president, Thomas Bach, speaking to Peng via video call. The IOC claimed Peng was “fine” and would meet Bach for dinner when he arrives in Beijing.

The Chinese Foreign Ministry attempted to ignore the growing calls for Peng’s freedom last week, claiming the issue was not “diplomatic” and therefore not under its purview. On Tuesday, spokesman Zhao Lijian changed its tone, claiming that those concerned about Peng were “deliberately and maliciously hyping up” the situation.”

Zhao referenced the IOC photo as proof that Peng was free.

The Chinese Communist Party regularly disappears inconvenient people. The U.S. government believes as many as 3 million people have disappeared into concentration camps in the occupied region of East Turkistan, home to the oppressed Uyghur minority.

The most high-profile person China has disappeared recently is Meng Hongwei, who was the president of Interpol at the time he vanished in 2018. Meng resurfaced in 2019 in a police hostage video; authorities claimed he was guilty of taking bribes while a public security official in China and hauled him off into China’s abusive prison system.