Gökçe – who publicly identifies as a communist and has previously feted human rights rogue Nicolás Maduro, the socialist dictator of Venezuela – reportedly posted a video on his Tiktok account last week showing To and Ministry spokesman To An Xo dining at his London restaurant, Nusr-et.

The video disappeared from his social media account shortly after it began circulating in communist Vietnam, outraging citizens in the impoverished country.

To appears to have traveled to London after attending the United Nations’ COP26 climate conference in Glasgow, Scotland. Environmental experts cite air travel by the world’s wealthiest as among the most impactful behavior on the climate, potentially single-handedly derailing the global temperature goals of envinronmentalist groups and organizations like the U.N. COP26 attracted 30,000 air travelers and over 400 private jets, leaving a prodigious carbon footprint.

As public security minister, To is one of the most powerful people in Vietnamese government, a Politburo member in charge of repressing dissidents, among other responsibilities, with a record of supporting increased Chinese involvement in Vietnamese security. Reuters noted last year that Vietnam’s last president served as minister of public security before taking the top post.

The steak in the video of the Vietnamese officials’ visit is believed to cost between £850 ($1,151.03) to £1,500 ($2,031.32), according to Mothership. London’s Nusr-Et Steakhouse became the subject of scorn and mockery in September after a receipt, presumably from a recent guest, began circulating online. In addition to £10 ($13) corn on the cob and £9 ($12.19) Coca-Cola, the “golden tomahawk” steak appeared on the receipt to the tune of  £630 ($853.12). Global food prices have skyrocketed between September and November, according to the United Nations, perhaps explaining the price difference on the steak in question.

The Vietnamese officials not only enjoyed gold-plated steaks at the London restaurant – notoriously one of the most expensive items on the menu there – but received service from Gökçe himself. The chef often enjoys carving and serving his steaks to celebrity guests, then posting the video on social media to give the impression that his restaurants are magnets for the rich and famous.

The video prompted near-immediate outrage in Vietnam. Radio Free Asia (RFA) published the video shortly after Gökçe took it down and noted that reactions to the video included “followers who wondered how To could afford a steak that costs 1,450 pounds ($1,975) on a monthly salary of roughly $660.” 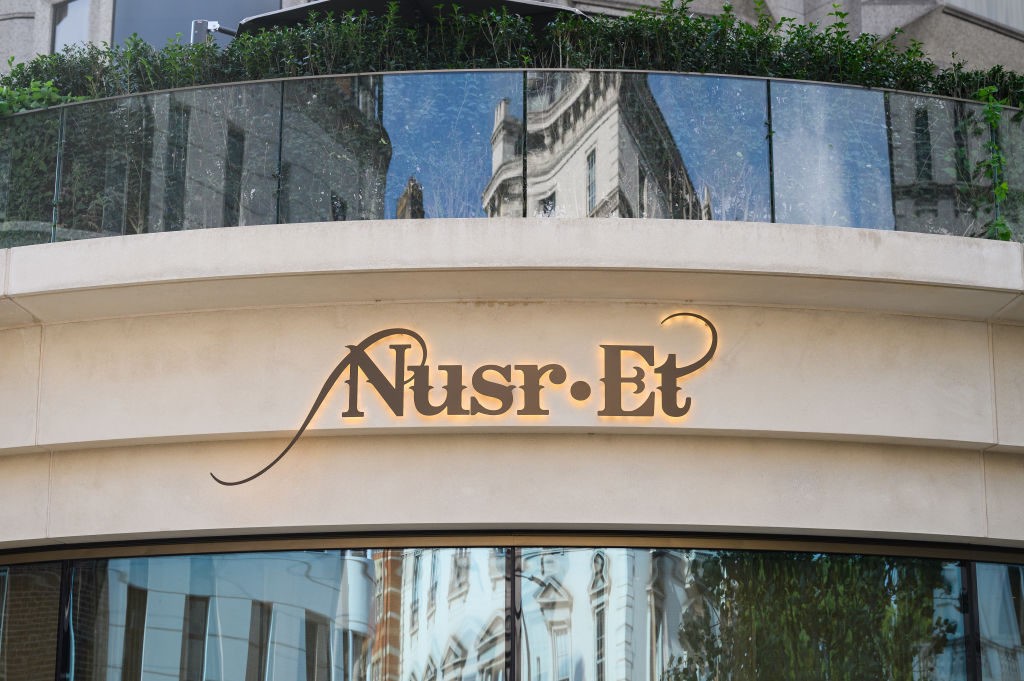 Exterior of the Nusr-Et steak restaurant on October 19, 2021 in London, England. Since it opened last month, the new steakhouse from Turkish chef Nusret Gökçe has drawn media attention for its pricey menu items, including a “golden tomahawk” steak encrusted in 24-carat gold leaf. (Leon Neal/Getty)

“My tax money has been used for luxury,” one Vietnamese citizen lamented, according to RFA.

“The government has always complained of financial difficulties yet they steal people’s money for this luxury life as if there is no tomorrow,” another Vietnamese citizen, Pham Viet Duc, wrote on Facebook, according to the Agence France-Presse (AFP).
The average Vietnamese citizen makes $184 a month, a fraction of the cost of a steak at Gökçe’s restaurant, according to Mothership.

The Vietnamese scandal occurred in a much similar fashion as the outrage surrounding Maduro’s visit to Nusr-Et – on that occasion, in Turkey – in 2018. Gökçe prompted outrage throughout Latin America by similarly posting a video to his social media accounts featuring Maduro and wife Cilia Flores dining at his restaurant, and Gökçe himself carving meat for the dictator and his wife. Gökçe appears to gift the dictator a “Salt Bae” t-shirt.

Venezuela is one of the world’s most malnourished nations; polls from that year indicated that as many as 80 percent of Venezuelans could not access the food necessary they needed to maintain a healthy diet.

Gökçe deleted the video shortly after posting it, but Venezuelan opposition groups distributed it through the internet widely, prompting outrage.

Maduro discussed his visit on socialist regime television, calling Gökçe “a very pleasant and happy man” and shamelessly celebrating the outragously expensive restaurant. Maduro made the visit to Istanbul while waiting for a flight connection in the Middle Eastern country. It remains unclear at press time what money Maduro used to pay for the visit.

Gökçe maintains a restaurant in Miami, Florida, home to one of America’s largest Venezuelan-American communities. Venezuelans organized daily protests in response to the Maduro video in 2018, accompanied by members of the Cuban exile community who oppose socialism. Organizers vowed to stay outside of Nusr-et for as long as it took to get it to shut down, but protests eventually subsided and the restaurant remains there today.

Cubans joined Venezuelans in solidarity against Maduro in addition to outrage at Gökçe’s public admiration for Fidel Castro, the late dictator of the country who ruled nearly 60 years between 1959 and 2016. Following the announcement of Castro’s death, Gökçe published an image on Instagram paying homage to the brutal dictator, posing with a communist beret and a cigar.

Some people just don't think! To post pics like this and then open a restaurant in Miami. Really? I just called and…

The chef deleted the post after receiving widespread condemnation from Latin American observers.