The Chinese Foreign Ministry welcomed American athletes to Beijing for the 2022 Winter Olympics on Monday, promising to guarantee their “safety and convenience” in a city plagued by coronavirus lockdowns and communist repression.

The Winter Olympics are scheduled to begin in February, but athletes often travel into the host city much sooner to begin training and get settled into the atmosphere there. The grand welcome by the Foreign Ministry to the estimated 230 Americans participating in the Games served as a reminder that America has, in fact, given the event its blessing despite the host government currently committing genocide and engaging in a long list of other human rights atrocities.

China, arguably the world’s most repressive regime, won the honor of hosting the 2022 Winter Olympics as it only had to compete with Kazakhstan, a much smaller and poorer nation, in the 2015 round of voting to choose a host city. Human rights activists and victims of the communist regime have spent the past year urging the world to boycott the Winter Games – or the International Olympic Committee (IOC) to relocate them – arguing that participating in the event is an honor that elevates a government guilty of a long list of crimes against its own people.

No country has agreed to boycott the Olympics, but the administration of President Joe Biden announced what it called a “diplomatic boycott” in which American politicians would not attend the event. The Chinese Communist Party responded by noting that diplomats do not play Olympic sports, so their absence is not a boycott and would not in any way impede the games. Beijing also pointedly noted that it never invited any American officials to attend the competition, so their grand “boycott” gesture was an empty one.

In an apparent attempt to underscore how irrelevant Biden’s “diplomatic boycott” would be to the Olympics, the Foreign Ministry issued a hearty welcome to American athletes on Monday.

Biden will not back an athletic boycott of the 2022 Winter Olympics in Beijing, but backed a boycott of Atlanta by the MLB All-Star Game. https://t.co/5M3RFq6GEa

“Athletes from all around the world are welcome to compete in the Beijing Winter Olympic Games, including those from the US,” spokesman Zhao Lijian said in response to a question about the American athletes. “The Chinese side will ensure the safety and convenience of all athletes and provide support to each and every oneof them in the pursuit of their Olympic dream. We hope that they will be able to excel themselves with their best performance.”

Zhao also boasted of what he called a “growing chorus from the international community” in support of the Chinese Communist Party against those protesting its human rights abuses, noting that the secretary-general of the United Nations, António Guterres, is planning to attend the event.

“Government officials from countries including the ROK [South Korea], Vietnam, Laos, Cambodia, Pakistan and Sri Lanka pointed out that the Olympic Games is not a place for ideological confrontation,” Zhao claimed, “but a platform for closer friendship and cooperation between countries, and said they believe that the Beijing Winter Olympics will be a spectacular and splendid gathering for sports lovers all over the world.” 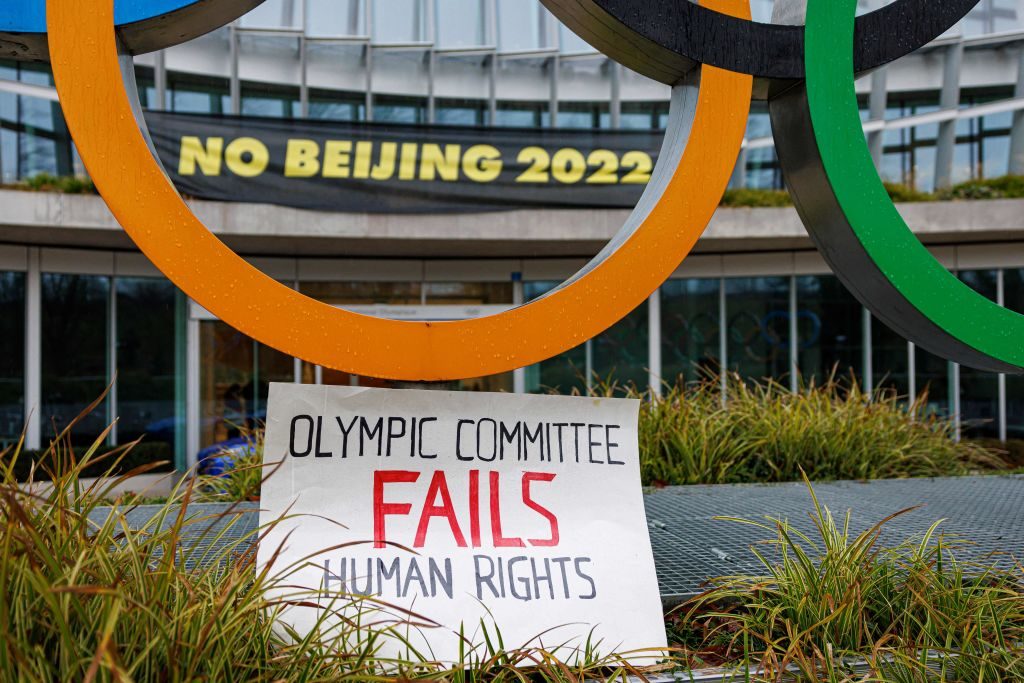 A placard at the entrance of the International Olympic Committee (IOC) headquarters during a demonstration of Tibetan activists from the Students for a Free Tibet association, ahead of the February’s Beijing 2022 Winter Olympics, in Lausanne. (VALENTIN FLAURAUD/AFP via Getty)

“All the countries and people following the Olympic spirit have confirmed with their real actions that to hold a streamlined, safe and splendid Winter Olympics in Beijing is the shared aspiration of all,” the spokesman continued. “Certain countries’ moves to use the event for political stunt and manipulation are doomed to fail.”

Zhao appeared to be making a barbed reference to the United States, Australia, and the United Kingdom, the three countries so far engaging in the diplomatic non-boycott as an attempt to protest China’s human rights record. Other countries, like New Zealand, are also not sending politicians to the Games, but have insisted they are not doing so for political reasons, but to protect the politicians from Chinese coronavirus.

New Zealand’s far-left authoritarian government has not elaborated on why the politicians need to be protected from the Chinese-origin disease but athletes do not.

Evidence indicates that, despite China’s repeated claims that it has brought its internal Chinese coronavirus outbreaks under control, Beijing is at high risk for a major outbreak as the Olympics begin. The capital city postponed its annual marathon indefinitely in October and has imposed significant limits on mobility for residents of neighborhoods with high infection rates.

The Communist Party has also limited flights into the city, quarantined entire trains heading to Beijing, and last week forbade Party officials from leaving the city prior to the Games, apparently to avoid the embarrassing optics of politicians fleeing the area right before a massive influx of international travelers arrives.

The spread of the Omicron variant of Chinese coronavirus, first identified in Africa but present in Europe long before South African scientists alerted the world to its existence, has raised alarm for the wellbeing of the athletes in Beijing. On Sunday, the National Hockey League (NHL) announced it was reconsidering allowing players to attend the Beijing Games.

“Given the disruption to the NHL’s regular-season schedule caused by recent COVID [Chinese coronavirus]-related events and the continued uncertainty caused by the ongoing COVID pandemic,” an NHL statement released this weekend noted, “the NHL and NHLPA are actively discussing the matter of NHL Player participation in the 2022 Winter Olympics in Beijing, China, and expect to be in a position to announce a final determination in the coming days.”

The NHL recently postponed about a month’s worth of professional games to limit the spread of the virus. Keeping players from the Olympics would affect the American and Canadian national teams.

The NHL did not indicate that human rights concerns had any impact on the decision to allow players to participate in the Olympics.

The Biden administration, like every other administration in the world, asserted in early December that the diplomatic non-boycott was the way to go because athletes have a right to participate in games that overrides the fundamental human rights of Chinese citizens that their government routinely tramples.

“We believe U.S. athletes, people who have been training, giving up a lot of blood, sweat, and tears preparing for these Olympics should be able to go and compete, and we look forward to cheering for them from home,” White House Press Secretary Jen Psaki declared during an announcement in early December confirming American participation in the Olympics.

The Global Times, a Chinese government propaganda newspaper, declared on Monday that America had “embarrassed itself” with the diplomatic non-boycott.

“No one cares whether US officials or politicians come, nor will it impact the Games,” the Times declared, citing a regime-approved “experts.”

The Biden administration, like the administration of President Donald Trump before it, has officially declared China’s attempted elimination of Islam, Uyghur culture, and Uyghur people in East Turkistan a “genocide.” The Uyghur Tribunal, an independent organization formed to investigate evidence of genocide in East Turkistan – a western region China refers to as the Xinjiang Uyghur Autonomous Region (XUAR) – concluded this month that China was guilty of genocide “beyond a reasonable doubt,” citing extensive evidence of forced sterilization of women, mass killings of babies and forced abortions, and the use of concentration camps to imprison, indoctrinate, and enslave Uyghur people.