Us and Them: Global Elites Drive Demand for Private Jets to New Highs During Pandemic

The global demand for luxury private jets is booming as elites ignore irregular commercial travel options and fly their own way as coronavirus restrictions linger around the world.

In the U.S. alone, business jet take-offs and landings are up 40 percent year-on-year on the back of unprecedented demand from the super rich.

They’re at their highest point since before the 2008 financial crisis, partly driven by the pandemic as big companies expanded private jet privileges for their top executives, MSNBC reports.

The story is the same around the world.

More than 4.2m private jet flights have taken place this year, according to aviation data provider WingX, with the Financial Timesoutlining a record number in each of the past six months. In the first week of November they were up 54 per cent on the same period last year, and up 16 per cent on 2019.

Demand is so high that Flexjet has stopped taking on new customers for its entry-level Jet Card programme. So has NetJets, which has reported the highest demand for flying in its near 60-year history and is investing about $2.5bn in 100 new aircraft, according to the FT.

The push is coming from the rich, the famous, from Wall Street to Hollywood and beyond.

Being a rich eco-hypocrite Hollywood elite like Chris Hemsworth means riding on private jets while lecturing all us peasants about global warming. https://t.co/KPm7WZLYRR

The extraordinary demand is apparently hostage to the erratic return of regular commercial flights — slimmed timetables and constantly changing flight times annoying those who demand to fly when they want and money.

Lots and lots of money helps, too.

The world’s 500 richest people added $1.2 trillion to their fortunes this year through October, according to the Bloomberg Billionaires Index, powered by booming stock markets and central banks flooding economies with new money.

Such forces have also spawned dozens of new billionaires in just 12 months.

Impact on the environment is very much a lesser concern, even for those frequent private jet flyers who profess to a profound concern for the planet.

Billionaire jet-owning Elites convene for globalist confab to discuss how to get the peasantry to focus on global warming. https://t.co/ZCPRZDSQaH

The Daily Mailreports the average decent-sized private jet roars through about 380 gallons of fuel, emits two tonnes of CO2 for every hour in flight and generates an annual fuel bill of about $U.S. 450,000 a year.

That’s not the only cost involved.

To put that in context, the total carbon footprint of an average person — including all travel and food — is approximately eight tonnes per year.

According to U.S. aviation manufacturer Honeywell Aerospace, this imprint has not stopped the sales of private jets also going up, with aircraft manufacturers reporting a strong increase in orders since the pandemic.

Buyers can find a helicopter with vegan seats, a jet with a sundeck and garage, and a hotelier’s design to hold discos at 35,000 feet — all three concepts unveiled at the Dubai Airshow last week among a host of others designed to keep VIP travelers comfortable in the sky. 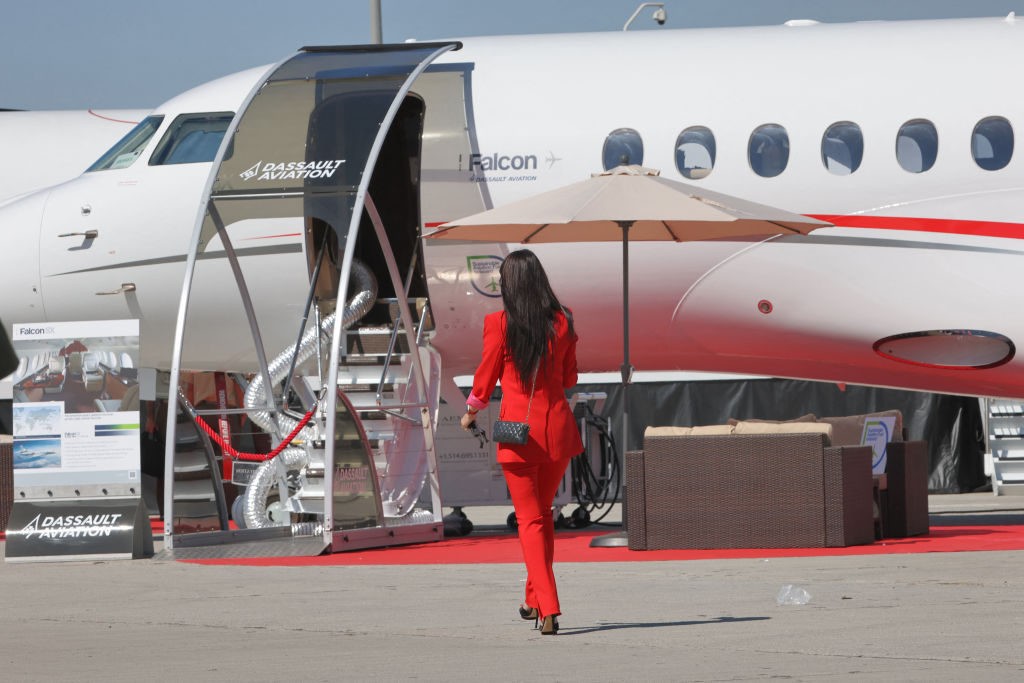 A Dassault Falcon business jet aircraft on the tarmac at the 2021 Dubai Airshow in the Gulf emirate on November 14, 2021. (GIUSEPPE CACACE/AFP via Getty)

The company forecasts up to 7,400 new business jet deliveries worth $238 billion in the next decade.

All of which means the future for the elites is one of private travel and executive lounges along with their own arrival and departure points.

The rest of us will simply have to stand in line and wait our turn to board a commercial flight.