UK Home Secretary Priti Patel on Friday permanently banned the Palestinian terror group Hamas in a move that aligns the country’s stance on Gaza’s self-styled rulers in line with the United States and the European Union.

“Hamas has significant terrorist capability, including access to extensive and sophisticated weaponry, as well as terrorist training facilities,” Patel said in a statement.

Patel, who is on a trip to Washington, said the move was “based upon a wide range of intelligence, information and also links to terrorism.”

“The severity of that speaks for itself,” she said, calling Hamas “fundamentally and rabidly anti-Semitic”, adding proscription was required to protect the Jewish community.

Today I have taken action to proscribe Hamas in its entirety.

This government is committed to tackling extremism and terrorism wherever it occurs. pic.twitter.com/TQfPzomyIm

The military wing of Hamas has been outlawed in the U.K. since 2001 but the organization as a whole was not proscribed  – until now.

The organisation will be banned under the Terrorism Act.  Anyone expressing support for Hamas, flying its flag or arranging meetings for the organisation would be in breach of the law, the interior ministry statement confirmed.

Patel is expected to present the change to parliament for a vote next week. 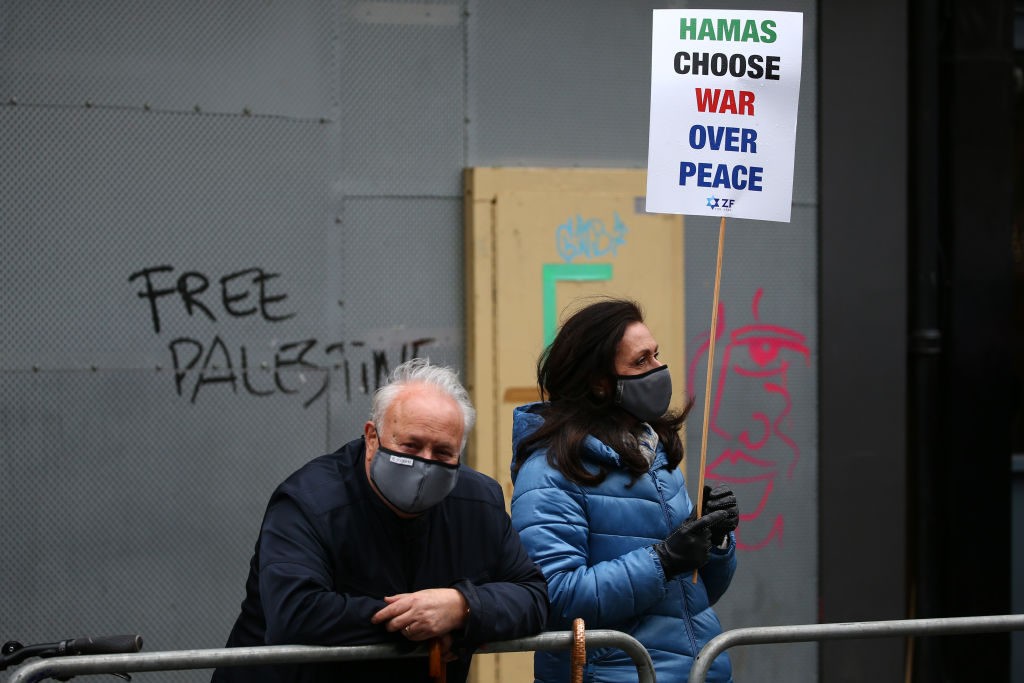 A demonstrator holds an placard during a Pro-Israel demonstration outside the Israeli Embassy on May 23, 2021 in London, England. The demonstration follows a large pro-Palestinian protest in London and similar demonstrations spurred by the fight between Israel and Hamas that erupted on May 10. (Hollie Adams/Getty Images)

“Resisting occupation by all available means, including armed resistance, is a right granted to people under occupation as stated by the international law,” said Hamas in a separate statement, Reuters reports.

Hamas has long been active in the UK under the guise of its so-called political arm.

Former UK Labour Party leader Jeremy Corbyn has been accused of giving his personal support to the terrorists.

As Breitbart News reported, he used an Iranian TV programme called “Remember Palestine” in 2012, to describe more than 1,000 convicted terrorists released by the Israeli government in a prisoner swap as “brothers”, and questioned if there was a “serious case” against them.

Hamas is considered a terrorist group by Israel, the U.S. and the European Union.