Review: China's Anti-American 'Battle at Lake Changjin' Is the Worst Movie of 2021

First, the bad news. China’s super-sized propaganda The Battle at Lake Changjin is one of the highest grossing movies of the year, raking in more than $900 million in less than three months if we’re to trust official CCP figures, which we can’t and shouldn’t, but more on that later. It was the No. 1 movie at the global box office until Spider-Man: No Way Home surpassed it this weekend.

The three-hour Korean War epic has easily trounced other Hollywood blockbusters to cement Commie-wood’s ascendance as a movie industry ready to dominate the world. The movie is allegedly so popular in China that a sequel is already in production. Be afraid.

Now for the good news. The Battle at Lake Changjin is terrible, awful, and at times laughably inept — so bad in fact that it took me several attempts to finish it and I have a high tolerance for long, foreign-language movies.

Of course, it is pro-communist, anti-American propaganda to its core, but that’s not why it’s bad. I expect a movie commissioned and backed by a genocidal communist dictatorship to be anti-American, and the filmmakers — three credited directors are responsible for this monstrosity — exceeded my expectations. 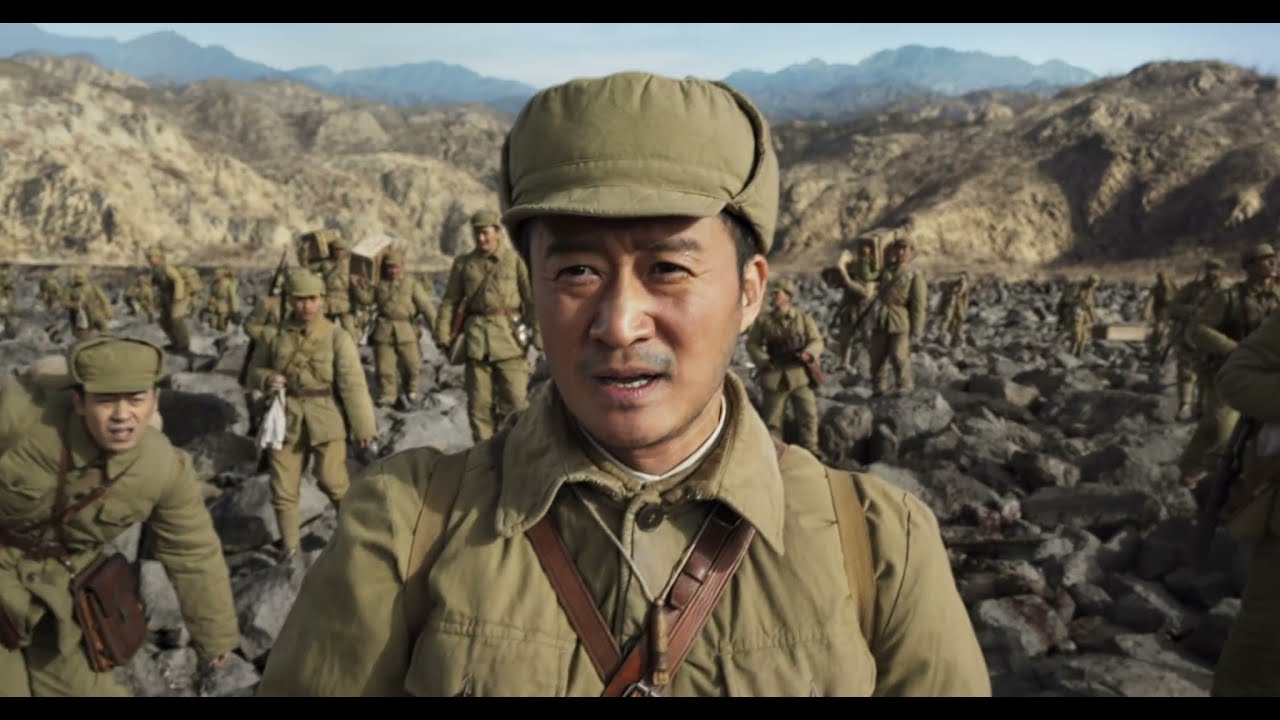 Like so much of what comes out of China, the movie is a crappy knockoff of an original American product — the Hollywood war epic. Watching Changjin is like watching a Michael Bay movie if Michael Bay had gone through a communist re-education camp and was then partially lobotomized.

This is easily the worst movie of 2021. And I saw the vomitrocious Don’t Look Up.

Full disclosure: I watched a low-quality bootleg version of The Battle at Lake Changjin so I can’t say how it plays on a big screen. But a bad screenplay is a bad screenplay and this one is a stinker.

The movie dramatizes the Battle of Chosin Reservoir — as it’s known outside China — where the Chinese successfully repelled U.S.-led forces attempting to make their way through North Korea toward the Chinese border. The battle, fought in weather so cold that soldiers recalled open wounds freezing on contact with the air, signaled a major turning point in the Korean War — or as it’s known in China, The War to Resist U.S. Aggression and Aid Korea.

Pro-CCP sentiment is the movie’s guiding force, and so the story opens with war hero Wu Qianli (Wolf Warrior star Wu Jing) returning to his village in a sequence that idealizes rural proletarian poverty. No sooner does he embrace his elderly parents than war once again calls him to the front. Little does he know his callow younger brother (former boy band star Jackson Yee) is tagging along in hopes of tasting the glories of war for the first time.

Changjin follows its hero as he leads the 7th Company of the People’s Volunteer Army into battle. The movie attempts to impart personalities to the ensemble cast à la Platoon or Band of Brothers, but the bonding scenes are hackneyed and clumsily executed, with an incessant musical score dictating the emotions of the moment. The movie has little feeling for normal human interaction and often feels like it is biding its time before the big battle sequences begin.

Along the way, we get a couple of brief scenes with Chairman Mao, who is bathed in golden light and is portrayed as a benevolent father figure and compassionate leader. Yeah right. 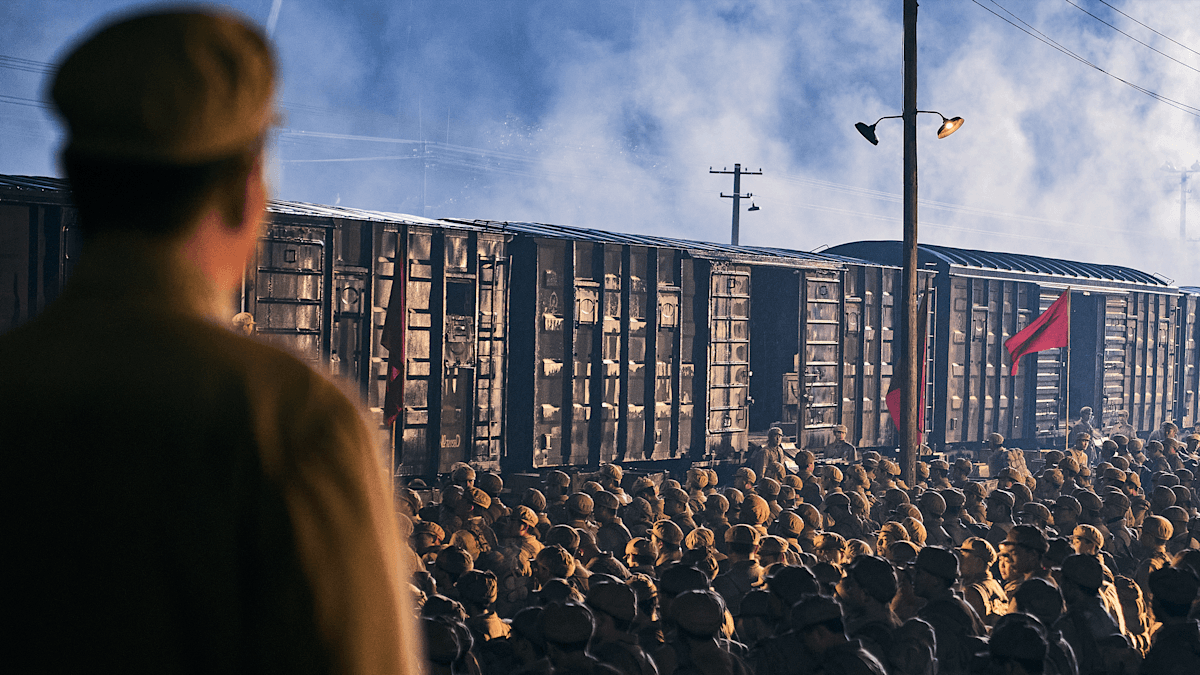 In a line that blatantly re-writes history, a hawkish official advises Mao: “By being stationed in Taiwan, the U.S. army has already invaded our territory.”

Mao’s antithesis is Gen. Douglas MacArthur, played by American expatriate actor James Filbird as a shameless buckaroo with all the humanity of a rock. The movie similarly generalizes U.S. forces as callous murderers and gluttons who stuff their faces at a Thanksgiving feast while their virtuous Chinese counterparts starve in the snow.

War movies don’t have to humanize the enemy to be good. The Thin Red Line didn’t and Black Hawk Down definitely didn’t. A meaningful war movie turns battle into a state of mind and Changjin fails because the only thing on its mind is ennobling Mother China.

The battle scenes begin promisingly. A brief U.S. air attack forcing Chinese forces to seek shelter amid a plain of boulders is visually striking. But the major battles disappoint with their lack of visual coherence, making it difficult to tell where any character is in relation to others as the movie piles on gun fire, explosions, and blood spray with no sense of pacing. You’d think the filmmakers just shot a whole bunch of coverage and pieced it together haphazardly in the editing room. And it all goes on forever. And ever.

Did Chinese audiences really line up in the tens of millions for this crap? Possibly, though you have to wonder if fear and coercion also played a role. Show your ticket stub and you get good social credit from Uncle Xi! As China prepares to celebrate the Beijing Winter Olympic Games and the 100th anniversary of the founding of the Chinese Communist Party, the CCP is putting on a show of strength for the world and the movie’s “record” grosses feel like a part of that publicity blitz.

A special medal of dishonor goes to the movie’s three directors — Chen Kaige, Dante Lam, and Tsui Hark — all of whom were once internationally respected auteurs but who, either by choice or duress, have become communist handmaidens. It’s especially depressing in the case of Chen Kaige, whose 1993 Palme d’Or winning Farewell My Concubine feels like a long time ago. That movie was a work of art that was banned by Chinese officials for portraying the tragic human toll of the Cultural Revolution.

The Battle of Lake Changjin is about as far from a work of art as you can get. It is also, unfortunately, the perfect movie for our time. A weakened U.S. under a frail (and compromised) President Biden can only sit back as China walks all over us and asserts its dominance on the world stage.

As a defeated Gen. MacArthur says in the movie’s final moments: “Fighting against such strong men as this, we were not ordained to win.”