The Chinese propaganda site Global Timesregaled former NBA star Stephon Marbury with an extensive profile on Wednesday after Marbury, who has lived in China for 11 years, excitedly praised China’s “hospitality,” applauded top epidemiologist Zhong Nanshan, and predicted the 2022 Beijing Olympics would be “extraordinary.

Marbury, one of the very few foreigners to receive a Chinese permanent resident “green card,” made the remarks at an event called the “2021 Understanding China Conference,” meant to highlight the voices of pro-regime foreigners. Marbury made the move to China after playing 17 seasons in the National Basketball Association (NBA), the largest percentage of them with the New York Knicks.

Since being in China, Marbury has become the winningest foreigner in the Chinese Basketball Association (CBA) and the subject of a propaganda film, a museum, and a stadium statue.

“I think the Olympics we’ll share here in Beijing is going to be extraordinary,” Marbury told Chinese reporters on Wednesday, “Especially that it’ll happen during this time in our lives under the pandemic.”

“I think the way how the country is handling the pandemic over sports times is the correct way, is the proper way how to do it – still giving people the opportunity to experience, use the experience in a different way. And I think whenever you get the opportunity to play on the global stage it’s always a treat,” Marbury continued. “I think this is an opportune time for all of the athletes to be able to compete to test themselves and to measure how far they can go based on all the training that they’ve done over time.”

The Beijing Olympics are facing global calls for a boycott in response to China’s growing list of human rights atrocities. Boycott demands from human rights activists and victims of the Chinese Communist Party began last year in response to China’s ongoing genocide of the Uyghur ethnic group of East Turkistan. Extensive documentation has revealed that China, under dictator Xi Jinping, has used killings, gang rape, forced sterilization, slavery, separation of children from families, and organ harvesting to eliminate the Uyghur people and other Muslim minority ethnic groups in western China. Xi has also presided over the building of one of the largest concentration camp systems in history.

More recently, athletes have called for an Olympics boycott in response to China’s disappearance of Wimbledon winner Peng Shuai after the tennis star accused a senior Communist Party official of raping her.

President Joe Biden, whose administration has deemed China guilty of genocide, has rejected calls for a boycott, claiming to be considering a “diplomatic” boycott, instead. Chinese media outlets have noted that a “diplomatic” boycott will be impossible if China does not invite American diplomats to the Games, which it has yet to do.

Marbury also used his appearance at the Chinese government event to praise Zhong, the top infectious disease expert in the country who many have compared to American medical celebrity Anthony Fauci. Marbury’s official account on Weibo, China’s top government-controlled social media outlet, features a photo of Zhong as its header image. 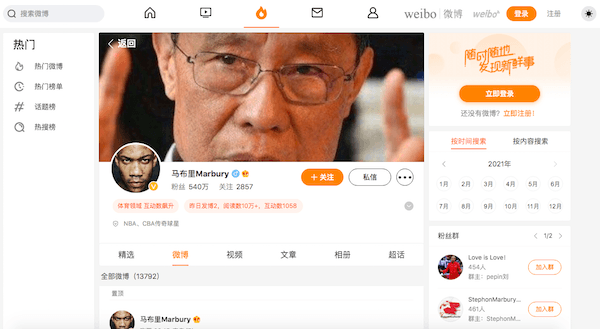 “The reason why I posted his picture [on Weibo] because I felt like he was the person that was giving the information that so many people needed to hear during that time,” Marbury told Chinese media. “I was wathcing a lot of live broadcasts that he was doing and he was speaking English and I was like, ‘Wow, this guy is really able to communication and talk to everyone on the planet, not just the Chinese people.”

Marbury described himself as a “fan” of Zhong’s “as a humanitarian and a person who cares for people” and said that, if he ever met Zhong, he would ask “what he thinks every day when he wakes up and how is he taking he steps to try to figure out how to contnue to help us.”

China is the origin nation of the Chinese coronavirus and caused the ongoing pandemic through censorship of key medical information and poor infectious disease management, including the organizing of an attempt at the world’s largest banquet at the height of the spread in Wuhan and arresting doctors for urging coworkers to wash their hands.

The Global Times lauded Marbury on Wednesday as a “brilliant player” and applauded his embrace of China. The newspaper praised Marbury for being one of only about 5,000 people to become a permanent resident of China via “green card,” omitting any criticism of China’s extremely restrictive immigration policy. It noted that Marbury encouraged other Americans to visit China for an extended period of time.

Marbury has been the subject of several major works of Chinese communist propaganda, including an entire museum dedicated to his life opened in 2015.

Marbury praised Jesus on his Twitter account for the opening of the museum at the time. Christianity is highly regulated in China – those who do not subscribe to government-run churches face extreme human rights abuses – and people in China cannot access Twitter without special government exemptions mostly given to regime propagandists.

Outside of the museum, Marbury also received the honor of a statue in his name.

We never asked anyone to change the game we just did it for the next generation to do it without asking. @alleniverson@st3phonn#theanswer#starburypic.twitter.com/az2FsOa63A

In 2017, Marbury won a “Best New Actor” award for playing himself in My Other Home, a propaganda film about how China helped Marbury achieve his true greatness.