Mikheil Saakashvili – a former president of Georgia and governor in Ukraine who has spent most of his career combatting Putin regime influence in the region – required “resuscitation assistance” on Sunday after 24 days on hunger strike, his lawyers said on Monday.

Police in Georgia arrested Saakashvili in early October upon his arrival to the country, acting on a warrant for his arrest based on a dubious “abuse of office” conviction Saakashvili adamantly rejects as valid. Saakashvili’s tenure as president of the country was marked by his very public condemnation of Russian leader Vladimir Putin and Putin’s subsequent invasion of two Georgian regions, Abkhazia and South Ossetia, in 2008. 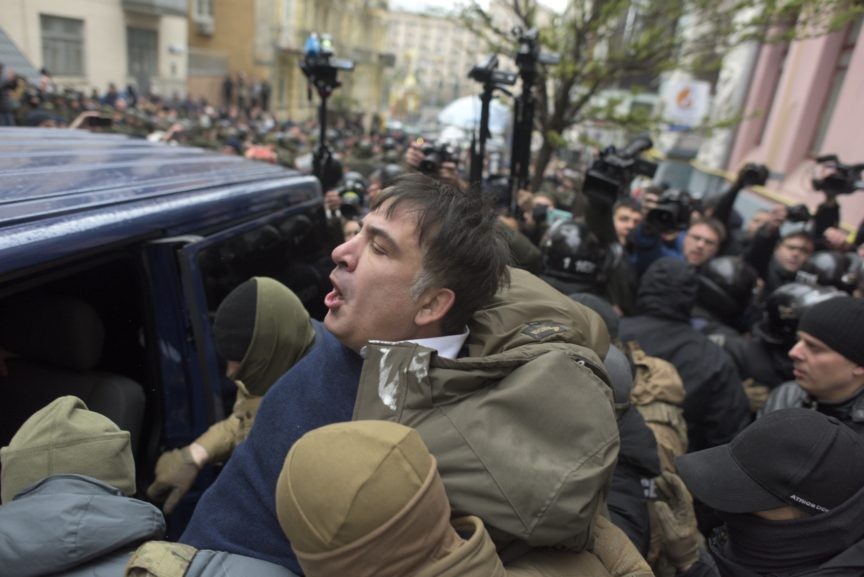 Ukrainian Security Service officers detain Mikheil Saakashvili at his house in Kiev, Ukraine, Tuesday, Dec. 5, 2017. Ukraine’s intelligence agency on Tuesday detained the former president of Georgia who has emerged as an anti-corruption campaigner in his new country but faced an angry backlash of protesters who would not let the officers to take him away. (AP Photo/Evgeniy Maloletka)

Saakashvili had not been home in eight years following his return this month, leaving after the rise of a pro-Putin faction that continues to control Georgia today. He immediately began a hunger strike upon his arrest that has entered its 26th day on Tuesday. Despite his extended time abroad, Saakashvili remains extremely popular – his arrest has resulted in tens of thousands of Georgians taking the streets in ongoing protests demanding his freedom. 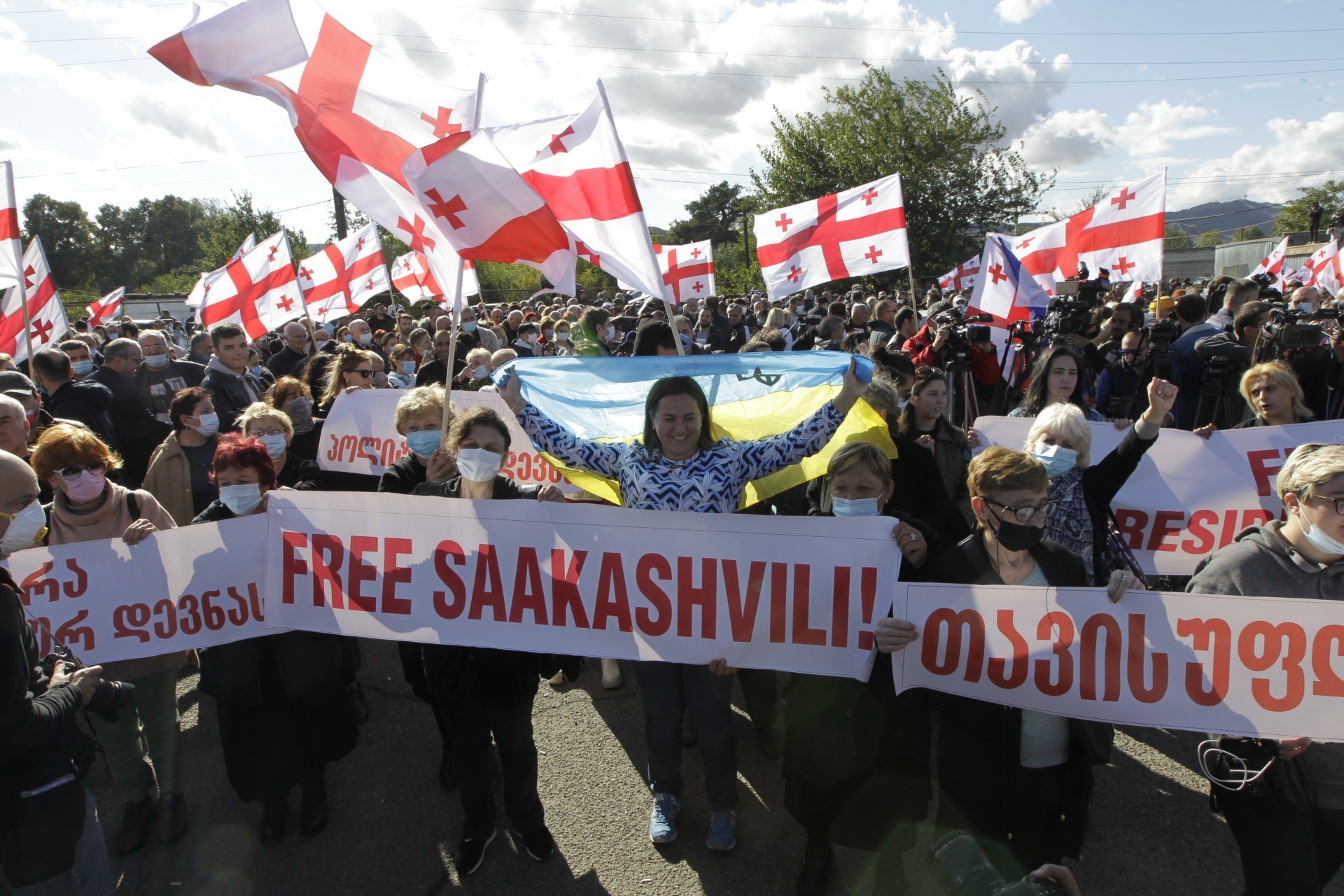 Georgian opposition supporters of former president Mikheil Saakashvili hold Georgian and Ukrainian national flags during a rally in his support in front of the prison where former president is being held, in Rustavi, about 20 km from the capital Tbilisi, Georgia, Monday, Oct. 4, 2021. Saakashvili was detained in Tbilisi on Saturday, Oct. 1, 2021. Georgia earlier declared Saakashvili wanted as a person convicted in absentia in several criminal cases and treated as a suspect in some others. Georgian authorities have warned repeatedly that he would be detained immediately once over the border. (AP Photo/Shakh Aivazov)

Dito Sadzaglishvili, Saakashvili’s attorney, told journalists that the former president required “resuscitation assistance” from intensive care professionals on Sunday and that he may soon experience a “sharp decline in health,” according to Radio Free Europe/Radio Liberty (RFE/RL).

“[The situation] confirms what the Concilium of physicians said earlier in their recommendation,” RFE/RL quoted the lawyer as saying, “concluding that [Georgia’s] third president is entering the phase of his hunger strike where a sharp decline in health can take place any time. Therefore, possible immediate medical interference will be on the agenda.”

The physicians referenced had advised the government allow Saakashvili to move to a hospital for medical observation that would allow more immediate and effective intervention if the hunger strike results in a medical crisis. Tbilisi officials have insisted that Saakashvili, as an inmate, should have access only to the prison’s health facilities and any preferential treatment would be an offense to common prisoners.

The Prime Minister of Georgia Irakli Garibashvili stated in a recent social media broadcast that he believed Saakashvili was exacerbating reports of his physical demise to orchestrate an escape, Georgian media outlets reported, by arriving at a private hospital and having a mob of loyal supporters force their way out of the hospital with him in tow. Inspiring national outrage, Garibashvili had stated of Saakashvili’s arrest before those remarks, “Saakashvili had to leave politics or we had to detain him.”

Garibashvili’s conspiracy theory appears to be inspired by an actual escape Saakashvili staged in Ukraine. 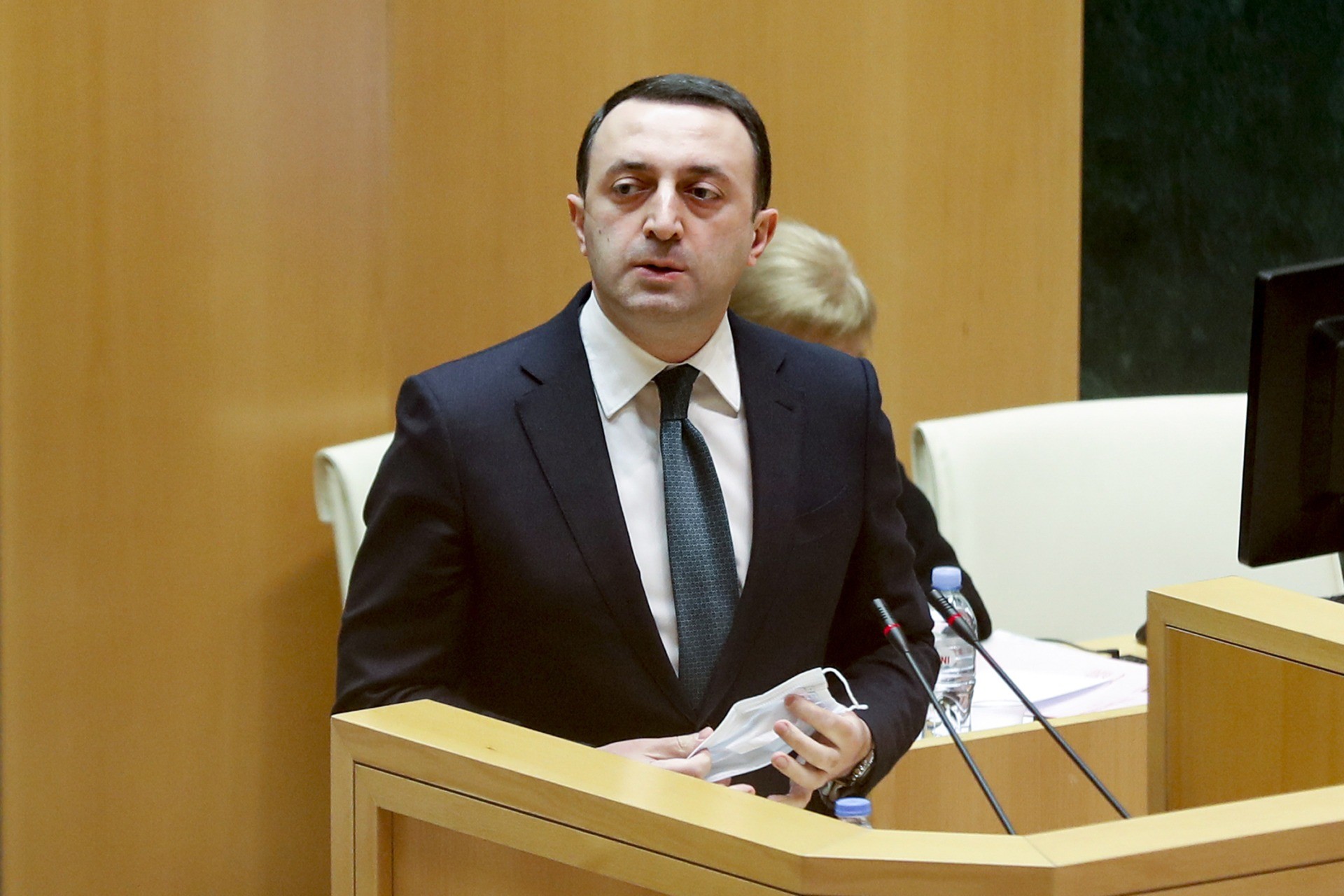 The former president left Georgia following the end of his term in 2013 and moved to Ukraine after the election of a pro-Russian government at home, resulting in the loss of his Georgian citizenship. In Ukraine, Saakashvili served as governor of Odessa for some time before taking on an anti-corruption job for then-President Petro Poroshenko. Kyiv stripped him of his Ukrainian citizenship, leaving him stateless, in 2016 after Saakashvili resigned and accused Poroshenko of abetting the corruption he hired Saakashvili to weed out.

A stateless man, Ukrainian authorities forced him into exile in Poland, a nation he has no political or ethnic ties to, in 2017. He refused to leave, however, reentering Ukraine with the help of a mob of supporters who physically held back border patrol agents to allow Saakashvili in.

Saakashvili arrived in Kyiv and was arrested shortly thereafter. Another throng of supporters surrounded the police car holding Saakashvili and pried the door open, dragging him out to freedom.

Saakashvili’s latest arrest has prompted similar mass action. Multiple rallies in Tbilisi and throughout Georgia have occurred calling for his freedom, as well as peaceful actions supporting the former governor in Ukraine.

The assembly believed to be the largest filled Tbilisi’s Freedom Square with 60,000 people, according to the Agence France-Presse (AFP). At the rally, an attorney for Saakashvili read the crowd a letter penned by the president urging, “Georgia must return to its pro-Western path and become a beacon of democracy, reforms and development.”

Happening now – thousands of @SaakashviliM supporters gathered at a rally downtown #Tbilisi demanding his release. #Saakashvili is on hunger strike in prison. pic.twitter.com/720A1kKoPj

Saakashvili’s official Facebook account posted a message on Tuesday, apparently written by the former head of state himself, expressing his refusal to consent to treatment at the prison medical facility.

Given his status as a Ukrainian citizen – restored by current President Volodymyr Zelensky, who defeated Poroshenko largely with an anti-corruption message – Saakashvili has attracted the attention of that state’s diplomats. Zelensky himself asserted that his government would fight for Saakashvili’s freedom.

Saakashvili posted a message on Twitter shortly after his arrest thanking Zelensky and saying he was “deeply touched” by his support. The former Georgian president wrote that his arrest was “based on the falsified charges that no one recognizes in the world, except Russia” and declared himself a “personal prisoner of Putin.”