President Joe Biden sees everything going the way of the Democrats ahead of the 2022 midterm elections, ignoring rampant inflation, the crisis on the southern border, and the ongoing coronavirus pandemic to claim early victory on Tuesday night.

Biden made his brave prediction during a ten-minute speech to 400 Democratic National Party (DNC) officials, senior staffers, labor leaders, and assorted dignitaries who gathered outdoors at the Washington Hotel for their annual Christmas party — which the president prioritized over visiting survivors of the Waukesha Christmas Parade Massacre, who he has ignored for over three weeks.

Biden began his address by backing the $1.2 trillion bipartisan infrastructure investment and thanking his wealthy donors before turning his attention to Democrats’ struggle to pass federal voting rights legislation.

“The right to vote is under unrelenting assault by Republican governors, attorney generals, secretaries of state, state legislators. They’re following my predecessor deep into the abyss,” Biden said, laying the blame firmly at the feet of the Republicans even as the country continues to drift from crisis to crisis.

The Biden administration’s failure to tackle high and rising inflation pushed consumer sentiment this month to its lowest level in a decade. https://t.co/KfCWTeFptq

“The struggle is no longer just who gets to vote or make it easy for eligible people to vote. It’s about who gets to count the vote – whether your vote counts at all. It’s a sinister combination of voter suppression and election subversion. It’s un-American, it’s undemocratic, it’s unpatriotic and sadly, it is not unprecedented now.”

The president also predicted Democrats would keep their majority in next year’s election, declaring: “Now we look at 2022 – I want to tell my republican friends, get ready pal, you’re in for a problem.”

He repeated himself a short while later, “Let me say this again for the press: We’re going to win in 2022.” 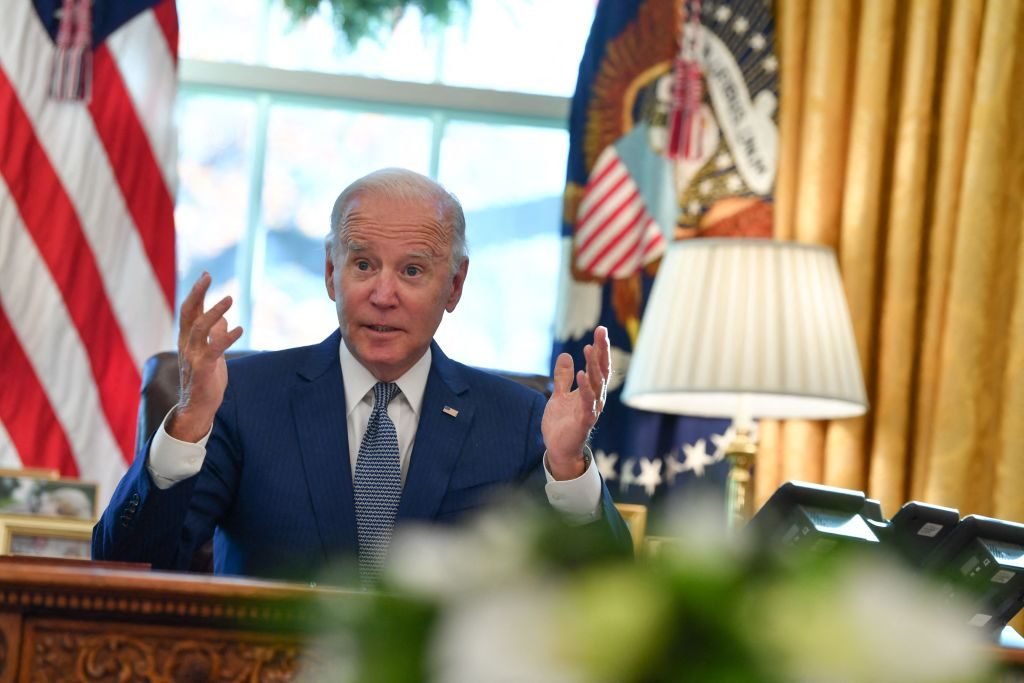 U.S. President Joe Biden speaks after signing an executive order on delivering government services in the Oval Office of the White House in Washington, DC on December 13, 2021. (NICHOLAS KAMM/AFP via Getty Images)

House Speaker Nancy Pelosi also spoke at the event. She praised Biden as the “perfect” president to handle the inflation crisis and pandemic as well as anything else that came across his desk.

“Our country could not be better served than with this most experienced and capable hands than yours, President Biden,” she crowed. “He’s just perfect. The timing couldn’t be better.”

The president stands at 43 percent approval and 51 percent disapproval in a NPR/Marist national survey released last Thursday, dropping to catastrophic lows for somebody seeking voter affirmation in the upcoming midterms.

GASLIGHT: Joe Biden said his catastrophically low approval rating is because Americans are getting "inaccurate information" about "their situation" and are "“being told that Armageddon’s on the way." https://t.co/DL8Ymum2hs

An average of all the most recent national polls compiled by RealClearPolitics puts Biden’s approval rating at 42 percent and his disapproval rating at 52 percent. The average included a large survey from the Wall Street Journal conducted last month that had the president well underwater, at 41 percent-57 percent.