President Joe Biden made a point of sharing that he had played basketball with Chinese dictator Xi Jinping – emphasizing the global popularity of the sport – during remarks on Monday celebrating NBA champions the Milwaukee Bucks.

Biden has repeatedly boasted of friendly relations with Xi, caretaker of what is believed to be the largest concentration camp network in the world. The current president served as vice president, under former leader Barack Obama, at the same time that Xi held the analogous position within the Chinese Communist Party, resulting in several joint appearances during Obama’s term.

“I’ve spent more time with him, I believe, than any other world leader has,” Biden said of Xi in October.

The Bucks, who won one of the NBA’s stranger tournaments in light of Chinese coronavirus pandemic restrictions, broke a five-year White House boycott by NBA players that began in objection to President Donald Trump assuming the office. The Bucks did not win the championship in any of those five years, not placing them in a position to either participate in or reject the boycott. The players expressed effusive joy at being able to visit the White House on Monday.

Biden applauded the team and heralded the popularity of the game as a victory for the country. 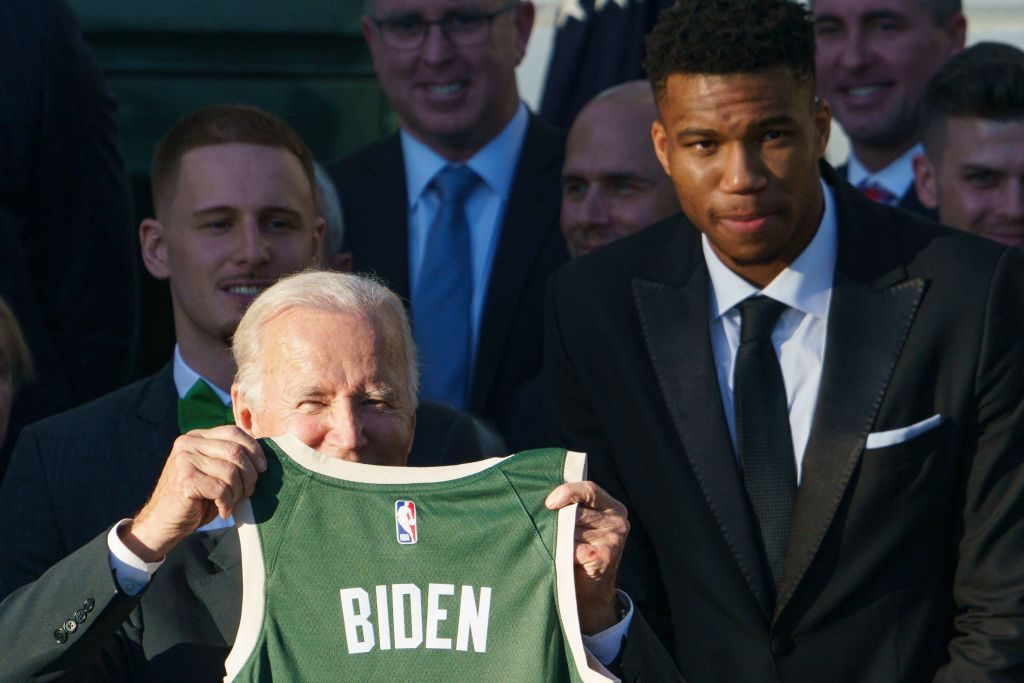 U.S. President Joe Biden poses with Giannis Antetokounmpo (R) after he was presented with a jersey during an event honoring the 2021 NBA Championship Milwaukee Bucks on the South Lawn of the White House in Washington, DC on November 8, 2021. (MANDEL NGAN/AFP via Getty Images)

“And I’m thinking to myself, ‘everywhere in the world I go, as I travel the world: basketball,'” he mused.

Biden went on to applaud the team itself, particularly its Greek-Nigerian star Giannis Antetokounmpo, and the United States for offering foreign players the opportunity to achieve glory at the highest levels of the sport.

“The best players want to come to America, though, in search of possibilities. And through it all, one thing remains constant: the values of the game and of the sport,” Biden said. “Teamwork, hard work, respect, and a belief that we can strengthen the bonds that bring us together and stand up for something bigger than ourself.”

“At just 26 years old, you’re just getting started,” Biden told Antetokounmpo. “What makes it even more special is you won the title with your brother, who is here today. And you join another brother already with a ring. What a hell of a family. Sons living the dream of an immigrant family from Nigeria and then Greece in search of new opportunity. In struggles, they always dreamed. Brothers who once had to share the same basketball shoes, all five of them, before they got to the NBA.”

Biden’s remarks about Xi Jinping appeared to be a reference to his 2011 visit to China, in which the two leaders visited a school basketball court and signed autographs for teens there. 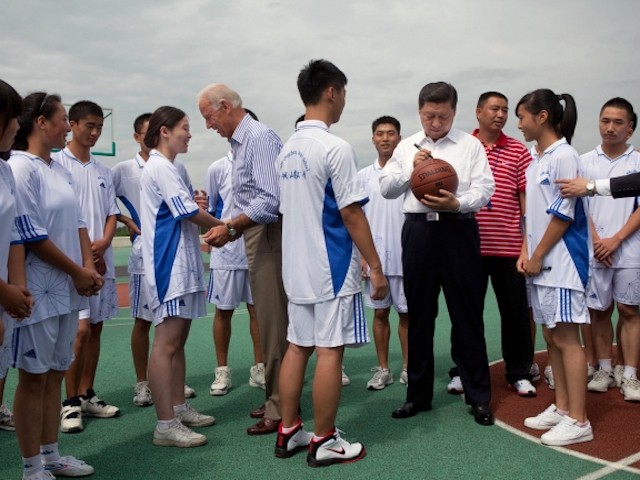 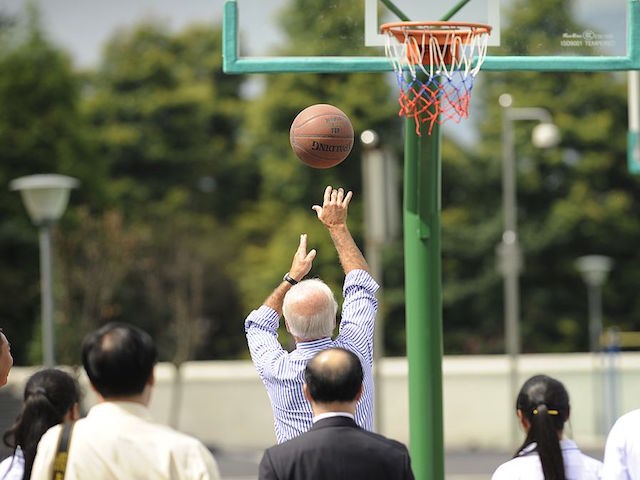 US Vice President Joe Biden (C) shoots at a basketball hoop during a visit to the Qingchengshan High School in Dujiangyan in southwestern China’s Sichuan province on August 21, 2011. Biden said that the world’s biggest economy has never defaulted on its debt and never would, during a visit aimed at boosting Chinese confidence in the US economy. (NG HAN GUAN/AFP via Getty Images) 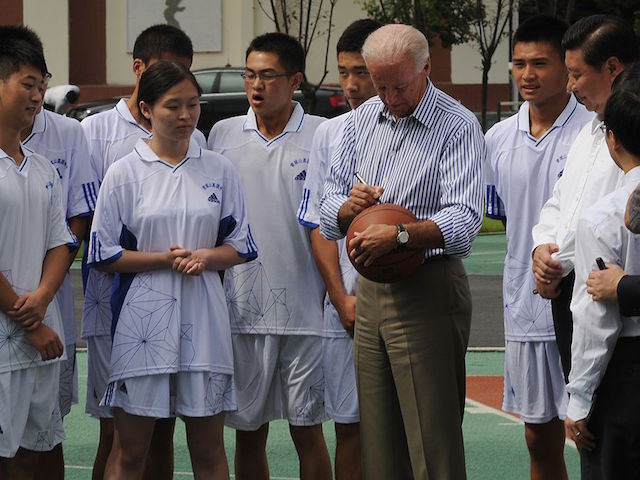 US Vice President Joe Biden (C-R) signs a basketball accompanied by then-Chinese Vice President Xi Jinping (2nd-R) and students at Dujiangyan Qingchengshan high school outside Chengdu in China’s southwest province of Sichuan on August 21, 2011. Biden said that the world’s biggest economy has never defaulted on its debt and never would, during a visit aimed at boosting Chinese confidence in the US economy. (PETER PARKS/AFP via Getty Images)

Biden’s reference to basketball on that trip omitted a much more prominent, and embarrassing, incident involving the sport. In addition to Biden’s visit to a school basketball court, the country organized a “friendly” exhibition match between professional communist People’s Liberation Army (PLA) team the Bayi Military Rockets and Georgetown’s college basketball team. The match erupted in violence, overtaking coverage of Biden’s visit to China.

“Players exchanged blows, someone in the crowd flung a chair, and fans tossed full water bottles at the Hoyas players and coaches as they headed to the locker room, writing off the rest of the game,” Reuters detailed at the time. “As the brawl spilled beyond the court, an unidentified Bayi player pushed Georgetown’s Aaron Bowen to the ground before repeatedly punching the sophomore guard while sitting on his chest.”

Georgetown coach John Thompson III issued a bizarre statement following the violence against his team in which he expressed gratitude to China for helping his players “strengthen[…] their understanding of a nation we respect and admire at Georgetown University.”

The Chinese Communist Party has escalated its threats to the integrity of American basketball since the incident, particularly in light of Xi Jinping assuming the position of dictator. Many NBA players have become economically beholden to the Communist Party through sponsorships by major Chinese companies. As China is a communist autocracy, all corporations are at the service of the Party. Many of these companies reportedly have ties to the ongoing genocide of Uyghur Muslims and other ethnic minorities in East Turkestan, a region occupied by China and believed to be home to the majority of the nation’s concentration camps.

In July, Congress accused NBA players of participating in China’s enslavement and genocide of the Uyghur people through these sponsorships.

“Americans can’t and shouldn’t conduct business with companies and players that profit through human slavery. And that includes NBA players — they can’t sign endorsement deals and benefit off slave labor,” Rep. Scott Perry (R-PA) said at the time. In a letter to the NBA players’ association, Sen. Jeff Merkley (D-OR) and Rep. Jim McGovern (D-MA) urged players to reject sponsorships from companies that engage in slave labor.

A March 2020 study published by the Australian Strategic Policy Institute (ASPI) found that at least 83 international brands – including major NBA sponsors like Nike – have profited from Uyghur slave labor in China. Most of the listed companies denied the allegations or claimed not to have any knowledge of such abuses.

The Communist Party has also moved to curb the speech of NBA employees, most notoriously in light of former Houston Rockets General Manager Daryl Morey expressing support for pro-democracy protesters in Hong Kong in 2019. The incident, NBA Commissioner Adam Silver admitted, cost the league “hundreds of millions” of dollars in canceled broadcast and sponsorship contracts.

“The political science major in me believes that engagement is better than isolation,” Silver said in May, excusing the NBA’s continued presence in the country. “That a so-called boycott of China, taking into account legitimate criticisms of the Chinese system, won’t further the agenda of those who seek to bring about global change. Working with Chinese solely on NBA basketball has been a net plus for building relationships between two superpowers.”