NEW YORK (AP) — Joan Didion, the revered author and essayist whose precise social and personal commentary in such classics as The White Album and The Year of Magical Thinking made her a uniquely clear-eyed critic of turbulent times, has died. She was 87.

“Didion was one of the country’s most trenchant writers and astute observers. Her best-selling works of fiction, commentary, and memoir have received numerous honors and are considered modern classics,” Penguin Random House said in a statement.

Along with Tom Wolfe, Nora Ephron, and Gay Talese, Didion reigned in the pantheon of “New Journalists” who emerged in the 1960s and wedded literary style to nonfiction reporting. Tiny and frail even as a young woman, with large, sad eyes often hidden behind sun glasses and a soft, deliberate style of speaking, she was a novelist, playwright, and essayist who once observed that “I am so physically small, so temperamentally unobtrusive, and so neurotically inarticulate that people tend to forget that my presence runs counter to their best interests.”

Or, as she more famously put it: “Writers are always selling somebody out.”

Didion received a National Humanities Medal in 2012, when she was praised for devoting “her life to noticing things other people strive not to see.” For decades, she had engaged in the cool and ruthless dissection of politics and culture, from hippies to presidential campaigns to the kidnapping of Patty Hearst, and for her distrust of official stories.

Slouching Towards Bethlehem, The White Album, and other books became essential collections of literary journalism, with notable writings including her takedown of Hollywood politics in Good Citizens and a prophetic dissent against the consensus that in 1989 five young Black and Latino men had raped a white jogger in Central Park (the men’s convictions were later overturned and they were freed from prison).

Didion was equally unsparing about her own struggles. She was diagnosed in her 30s with multiple sclerosis and around the same time suffered a breakdown and checked into a psychiatric clinic in Santa Monica, California, that diagnosed her worldview as “fundamentally pessimistic, fatalistic and depressive.” In her 70s, she reported on personal tragedy in the heartbreaking 2005 work, The Year of Magical Thinking, a narrative formed out of the chaos of grief that followed the death of her husband and writing partner, John Gregory Dunne. It won a National Book Award, and she adapted it as a one-woman Broadway play that starred Vanessa Redgrave. 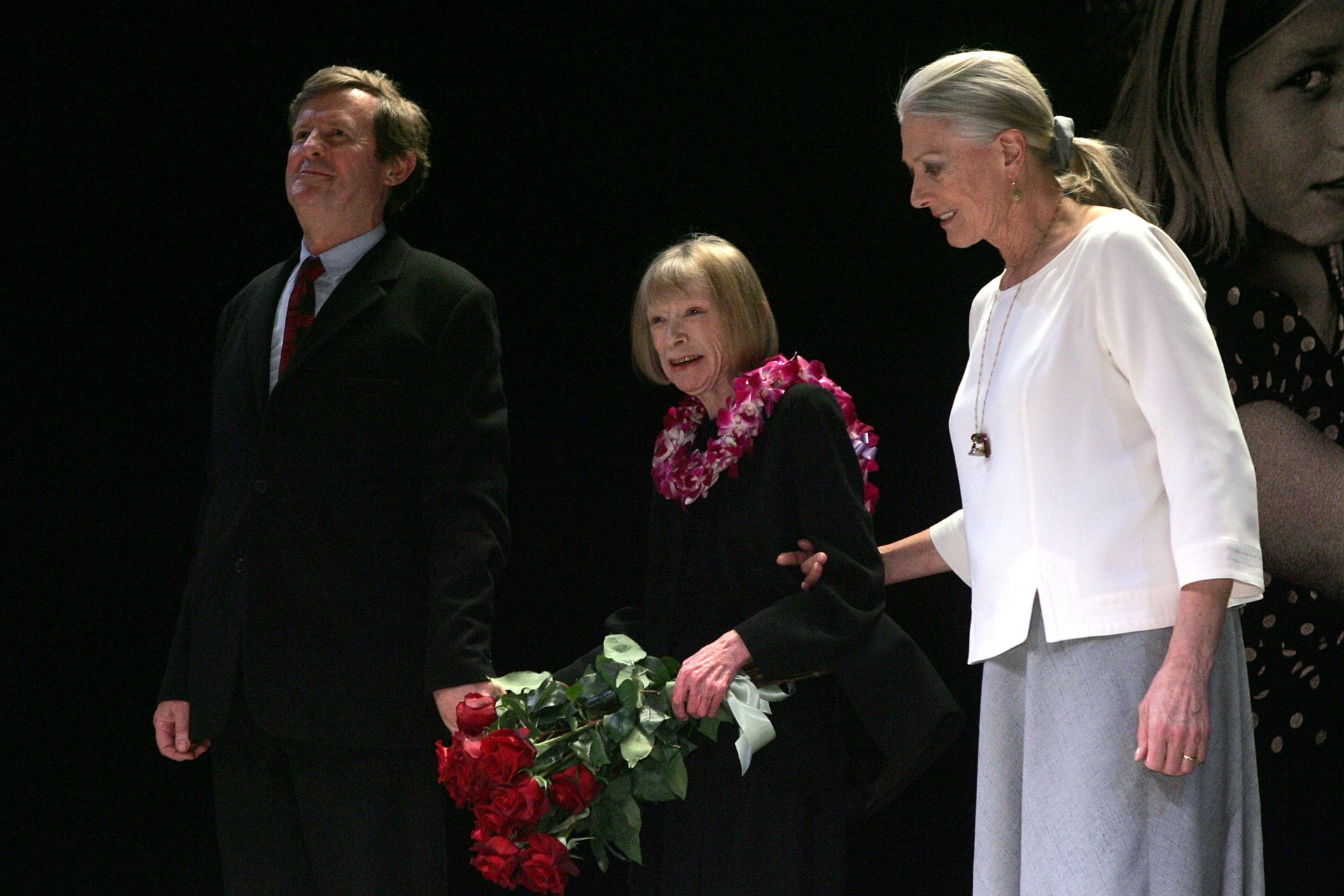 Director David Hare, writer Joan Didion, and actress Vanessa Redgrave take the stage during curtain call for the opening night of Didion’s “The Year Of Magical Thinking” at the Booth theater on March 29, 2007, in New York City. (Bryan Bedder/Getty Images)

Dunne had collapsed in 2003 at their table and died of a heart attack even as their daughter, Quintana Roo Dunne Michael, was gravely ill in a hospital. The memoir was a best-seller and a near-instant standard, the kind of work people would instinctively reach for after losing a loved one. Didion said she thought of the work as a testament of a specific time; tragically, Magical Thinking became dated shortly after it was published. Quintana died during the summer of 2005 at age 39 of acute pancreatitis. Didion wrote of her daughter’s death in the 2011 publication Blue Nights.

“We have kind of evolved into a society where grieving is totally hidden. It doesn’t take place in our family. It takes place not at all,” she told The Associated Press in 2005. Didion spent her later years in New York, but she was most strongly identified with her native state of California, “a hologram that dematerializes as I drive through it.” It was the setting for her best known novel, the despairing Play It As It Lays, and for many of her essays. 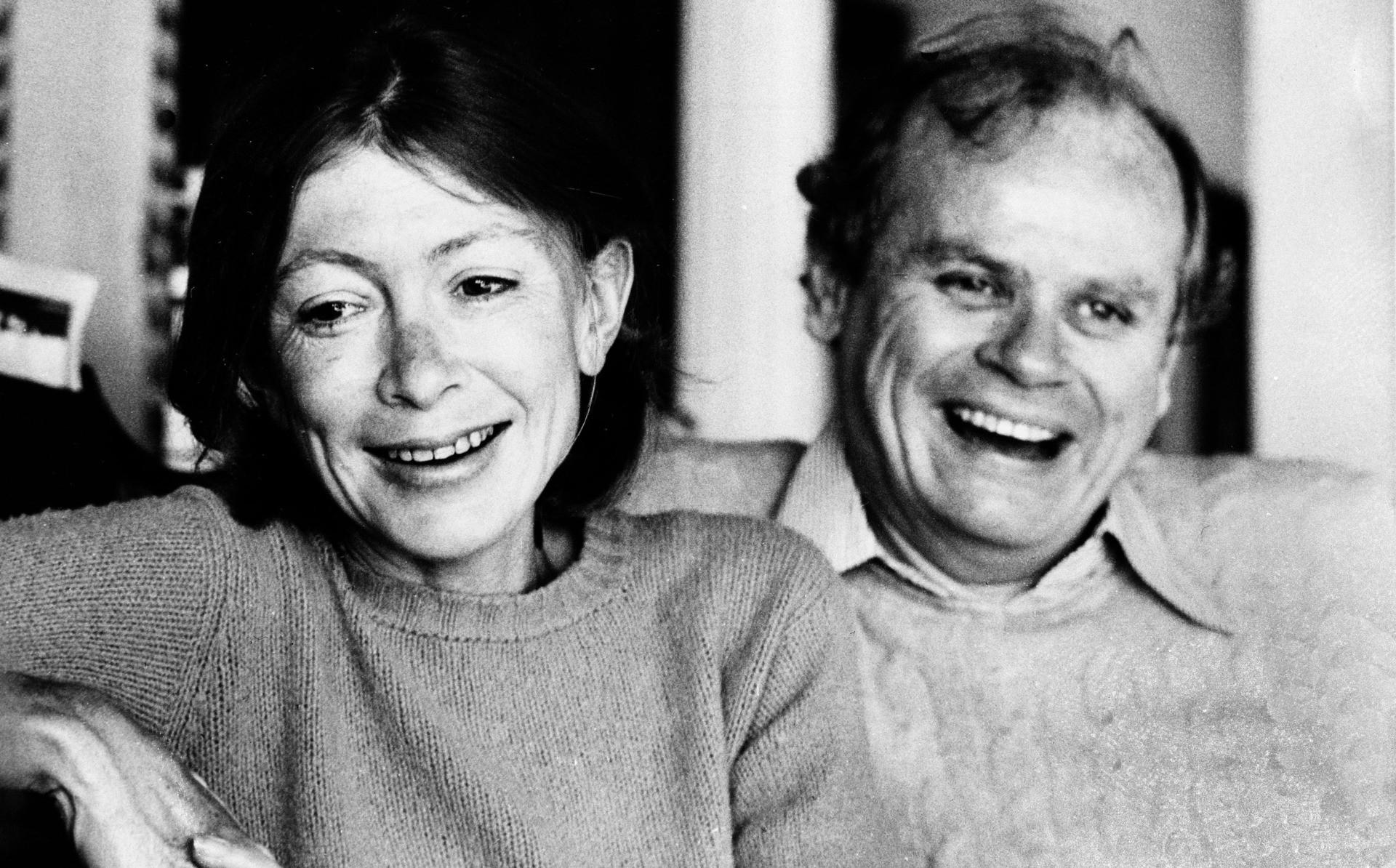 Authors Joan Didion, left, and her husband, John Dunne, are shown during an interview in their Malibu, California, home, in December 1977. (AP Photo) 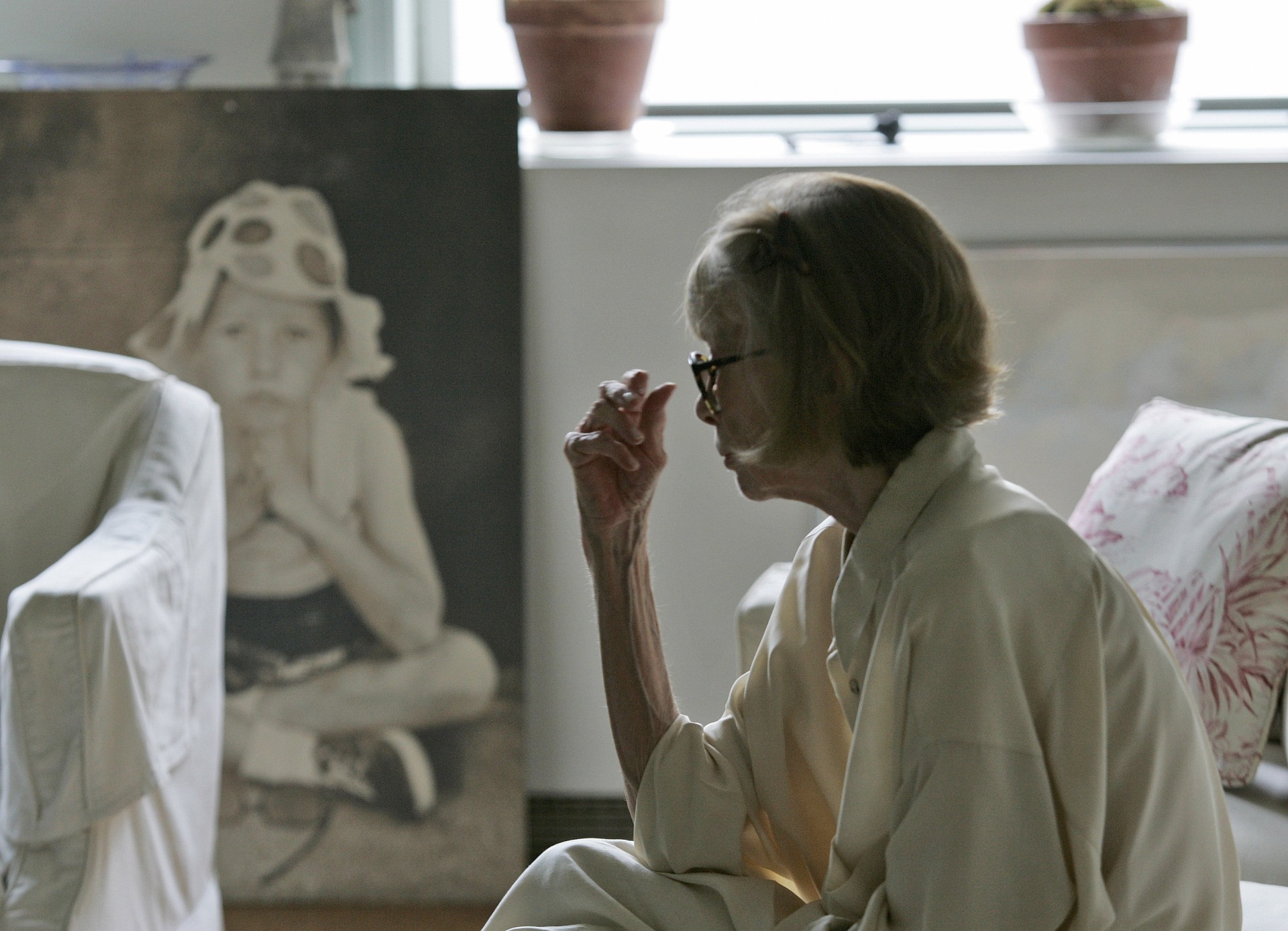 Author Joan Didion is shown near a painting of her daughter Quintana, in her New York apartment, on September 27, 2007. Didion’s reaction and adjustment to the sudden death of her husband John Gregory Dunne and daughter Quintana’s illness and death is chronicled in her highly acclaimed memoir, “The Year of Magical Thinking.” (AP Photo/Kathy Willens)

“California belongs to Joan Didion,” wrote the New York Times critic Michiko Kakutani. “Not the California where everyone wears aviator sunglasses, owns a Jacuzzi and buys his clothes on Rodeo Drive. But California in the sense of the West. The old West where Manifest Destiny was an almost palpable notion that was somehow tied to the land and the climate and one’s own family.”

Didion’s subjects also included earthquakes, movie stars, and Cuban exiles, but common themes emerged: the need to impose order where order doesn’t exist, the gap between accepted wisdom and real life, the way people deceive themselves — and others — into believing the world can be explained in a straight, narrative line. Much of her nonfiction was collected in the 2006 book We Tell Ourselves Stories in Order to Live, named after the opening sentence of her famous title essay from The White Album, a testament to one woman’s search for the truth behind the truth.

“We look for the sermon in the suicide, for the social or moral lesson in the murder of five,” she wrote. “We live entirely, especially if we are writers, by the imposition of a narrative line upon disparate images, by the ‘ideas’ with which we have learned to freeze the shifting phantasmagoria which is our actual experience.”

She was a lifelong explorer, writing about a trip to war torn El Salvador in the nonfiction Salvador and completing A Book of Common Prayer after a disastrous trip to a film festival in Colombia in the early 1970s. South and West: From a Notebook, observations made while driving around the American South, came out in 2017, the same year nephew Griffin Dunne’s documentary Joan Didion: The Center Will Not Hold was released. In 2019, the Library of America began compiling her work in bound volumes.

Didion prided herself on being an outsider, more comfortable with gas station attendants than with celebrities. But she and her husband, whose brother was the author-journalist Dominick Dunne, were well placed in high society. In California, they socialized with Warren Beatty and Steven Spielberg among others; and a young Harrison Ford worked as a carpenter on their house. They later lived in a spacious apartment on Manhattan’s Upper East Side, knew all the right people and had a successful side career as screenwriters, collaborating on The Panic in Needle Park, a remake of A Star Is Born, and adaptations of Play It As It Lays, and his True Confessions.

Born in 1934 in Sacramento, California, and descended from pioneers who had traveled with the notorious Donner Party, Didion was fascinated by books from an early age. She was encouraged to write by her mother, as a way of filling time, and was especially impressed by the prose of Ernest Hemingway, whose terse rhythms anticipated her own. She was both shy and ambitious, inclined to solitude, but also determined to express herself through writing and public speaking. She graduated from the University of California at Berkeley in 1956 and moved to New York for a job at Vogue after winning a writing contest sponsored by the magazine.

Conservative in her early years, voting for Republican Barry Goldwater in 1964 and contributing essays to William F. Buckley’s National Review, Didion became more liberal later on, attacking the role of religion in politics and the establishment’s “increasingly histrionic insistence” that President Clinton be removed from office for his affair with Monica Lewinsky. She was especially scathing about the quality of political reporting, mocking the “inside baseball” journalism of presidential campaigns and dismissing Bob Woodward’s best-selling books as vapid and voyeuristic, “political pornography.”

Didion married Dunne, whom she had met at a dinner party, in 1964. Two years later, they adopted a baby girl, Quintana Roo. Author couples are notoriously combustible, whether the drunken brawl of Lillian Hellman and Dashiell Hammett or the infidelity and suicidal demons of Ted Hughes and Sylvia Plath. But despite their own conflicts, Didion says she and Dunne grew and endured.

“Whatever troubles we had were not derived from being writers,” she told the AP. “What was good for one was good for the other.”