The international organization Human Rights Watch demanded in a statement on Sunday that sponsors of the 2022 Beijing Winter Olympics certify that and explain how their participation in the event – held in a country currently committing genocide – does not involve or enable gross human rights atrocities.

The International Olympic Committee (IOC) is under pressure from international human rights groups, persecuted minorities, and public officials all around the world over its decision to grant China the honor of host an Olympic Games session given its status as the world’s most prolific human rights abuses. China is currently engaging in a genocidal campaign against the Uyghur people of East Turkestan, an occupied region China refers to as Xinjiang, and is believed to have built hundreds of concentration camps in the region to torture, indoctrinate, enslave, and sterilize members of the minority. Similar camps are believed to also exist in Tibet, home to some of the Communist Party’s most extreme atrocities for decades. 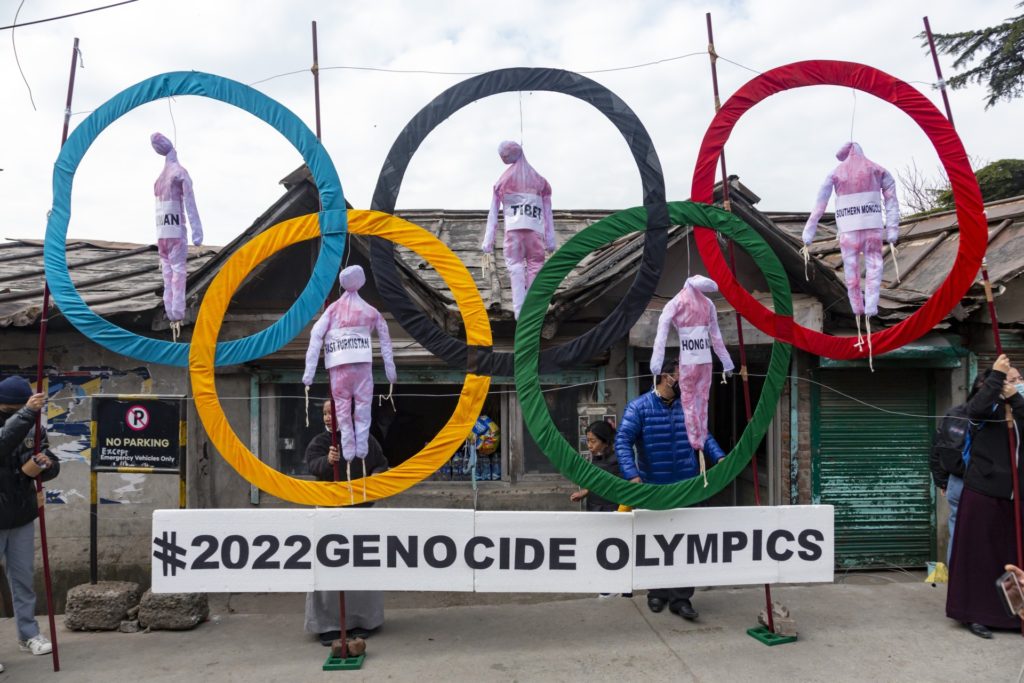 Exiled Tibetans use the Olympic Rings as a prop as they hold a street protest against the holding of 2022 Winter Olympics in Beijing in Dharmsala, India on Feb. 3, 2021. Leading sponsors of the Beijing Winter Olympics should explain publicly why they remain silent about alleged human rights abuses in China with the Games opening there in just under three months, Human Rights Watch said Friday, Nov. 12, 2021 in a statement. (AP Photo/Ashwini Bhatia)

In addition to genocidal abuses, the Communist Party regularly imprisons and torture political dissidents of all ethnic backgrounds, members of “illegal” religious faiths, and anyone it deems a barrier to dictator Xi Jinping’s complete stranglehold on power. China also outsources these abuses by pressuring foreign governments and corporations to silence anyone criticizing Beijing’s practices or face swift economic retribution.

Despite this, China has obtained not just the honor of hosting the Olympics, but lavish investments from multinational corporations sponsoring the Olympics. 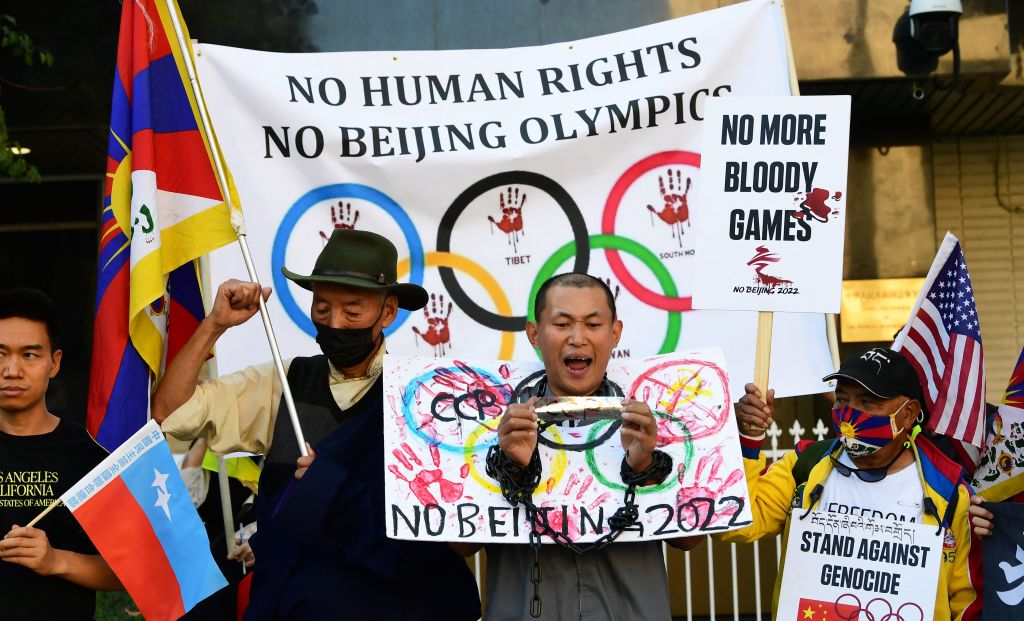 Activists rally in front of the Chinese Consulate in Los Angeles, California on November 3, 2021, calling for a boycott of the 2022 Beijing Winter Olympics due to concerns over China’s human rights record. – Activists lobbied Olympic broadcasters, including NBC, BBC, CBC and Sky to “immediately cancel broadcasting deals” to televise the Beijing 2022 Winter Olympics or “face risk of being complicit in the Chinese Communist Party’s severe and worsening human rights abuses”. (Photo by FREDERIC J. BROWN/AFP via Getty Images)

Among the members of the Olympic Partner Program – the most expensive sponsorship level – are American companies such as Coca-Cola, Proctor & Gamble, General Electric, Visa, and AirBnB.

“The International Olympic Committee’s major corporate sponsors should explain publicly how they are using their leverage to address human rights abuses in China ahead of the 2022 Beijing Olympic Games,” Human Rights Watch asserted on Friday. “Sponsors should also press the International Olympic Committee (IOC) to adopt a human rights policy to identify, prevent, mitigate, and account for any adverse human rights impacts across all Olympic operations and events, including for the 2022 Beijing Winter Games.” 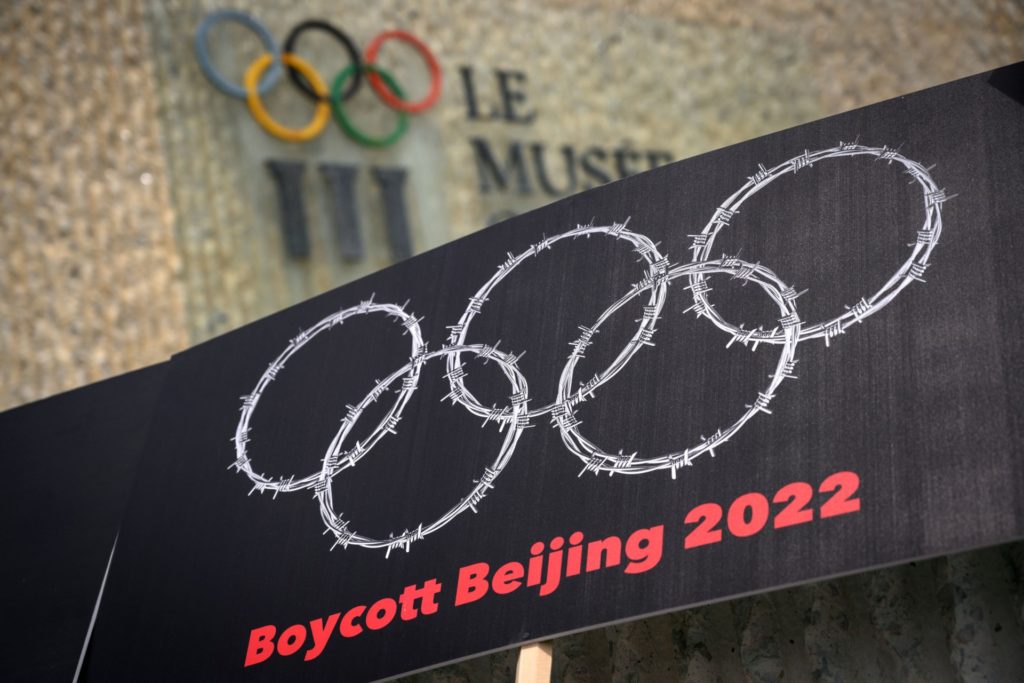 This photograph taken on June 23, 2021 shows a placard representing barber wire shaping and Olympics Rings are seen next to a sign of the Olympics Museum during a protest organised by Tibetan and Uyghur activists against Beijing 2022 Winter Olympics, in Lausanne as some 200 participants took part to the protest. (Photo by FABRICE COFFRINI/AFP via Getty Images)

The statement featured several demands for the sponsors, including pressuring the IOC to “promulgate a human rights policy and add human rights to the ‘fundamental principles’ of the Olympic Charter” – human rights are not an explicit goal supported by the Olympics at this time – and to “publicly certify that operations in China do not entail labor abuses or other rights violations.”

Other demands include speaking out for the many political prisoners trapped in China, pressuring China using their economic leverage to respect human rights, and call for an investigation into the Uyghur genocide.

Human Rights Watch noted that it had attempted to communicate to the Olympic partners – the most powerful sponsors – but none offered any concrete assurances on not participating in human rights abuses. The non-governmental organization noted that the partners “collectively pay billions of dollars in fees to be associated with the five Olympics Rings brand and are a significant source of IOC income.” The Olympics would likely not be a lucrative endeavor for IOC officials without these partners.

The human rights group noted that all but one Olympics sponsor in the partnership program had endorsed a United Nations document affirming that corporations had a responsibility to defend human rights.

Corporations should explain publicly how they are using their leverage to address human rights abuses in China ahead of the 2022 Beijing Olympic Games.

“According to the IOC’s website, the TOP sponsors include Intel, Omega, Panasonic, Samsung, P&G, Toyota, Visa, Airbnb, Atos, Bridgestone, Coca-Cola, Allianz, and Alibaba,” Human Rights Watch observed. “Many of the Olympic sponsors have policies committing them to work within a human rights framework and to disclose how they identify and address human rights risks.”

Alibaba, one of China’s wealthiest companies, is a notable exception.

“There are just three months until the Beijing 2022 Winter Olympics, but corporate sponsors remain silent over how they are using their influence to address China’s appalling human rights record,” Sophie Richardson, Human Rights Watch’s China director, said in a statement on Friday. “They are squandering the opportunity to show their commitment to human rights standards and risk instead being associated with an Olympics tainted by censorship and repression.”

The group joined a growing chorus of voices urging the world to reconsider granting China the honor of hosting the Olympic Games in light of its status as a rogue state.

“The international community has a rare opportunity to send a strong signal that China’s rights abuses are unacceptable,” David Curry, the CEO of religious freedom organization Open Doors, told Breitbart News in August. “The International Olympic Committee should re-evaluate its role in rewarding the CCP’s bad behavior with the 2022 Games, and corporate sponsors should consider withdrawing their support.”

Open Doors publishes an annual World Watch List that ranks the globe’s most severe religious persecution practitioners; China moved up six spots between 2020 and 2021, largely on the back of its genocide of Uyghur Muslims, crackdowns on “illegal” Christian churches, and persecution of Tibetan Buddhists, among others.

Several representatives of the Beijing Olympics’ corporate sponsors were called to testify before the U.S. Congress over their role in the event in July.

“Sponsors like Visa have no say in the countries selected by the IOC to host the Games,” that company’s representative insisted. “It has been that way for the entirety of our 35-year partnership and remains that way today.”

“We support and follow the athletes wherever they compete,” the Coca-Cola representative insisted.