Mihrigul Tursun, a Uyghur Muslim woman who became an activist after multiple stays at a Chinese concentration camp, told Breitbart News the harrowing details of her torture in these facilities before escaping to the United States.

Tursun spoke to Breitbart News on Friday during an event in front of the White House urging President Joe Biden to act against the genocide of the Uyghur people in their native East Turkistan, an occupied region China refers to as “Xinjiang.” Satellite images of the concentration camps and in-depth reporting by journalists and human rights activists estimate that Tursun is one of three million people — most of them Uyghurs, but some belonging to other Muslim ethnic minorities, as well — forced into a network of as many as 1,200 concentration camps in East Turkistan beginning in 2017.

After years of pressure on the Chinese Communist Party to cease its outrageous human rights atrocities, reports indicate that the Xi Jinping dictatorship has changed its strategy slightly, selling concentration camp victims as slaves to cotton fields and factories nationwide — making it harder for human rights activists to document the abuses.

The Communist Party officially claims the concentration camps are “vocational training centers” for uneducated ethnic minorities, meant to teach them job skills to help them compete in the Chinese economy. In reality, many of the missing are highly educated, successful people. Tursun told Breitbart News, for example, that she was detained in a concentration camp shortly after returning from Egypt, where she was studying abroad. 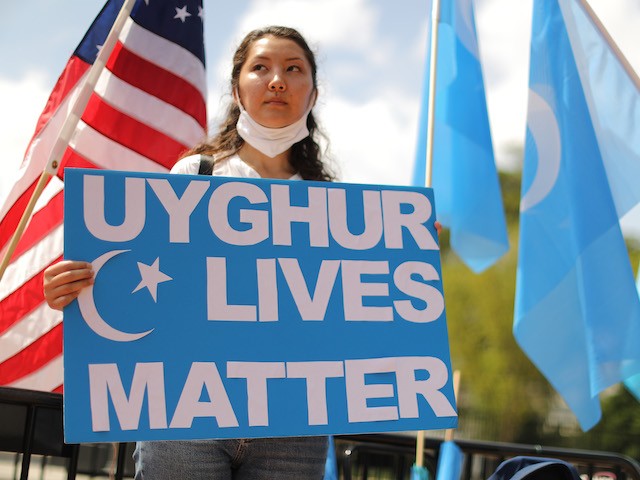 Supporters and members of the East Turkistan National Awakening Movement rally outside the White House to urge the United States to end trade deals with China and take action to stop the oppression of the Uyghur and other Turkic peoples August 14, 2020, in Washington, DC. (Chip Somodevilla/Getty Images)

Tursun came to the United States in September 2018 and has been repeatedlytelling her story since. Her details have remained consistent in every retelling. Tursun’s interview with Breitbart News, however, is among her first where she tells her story in English.

“I was in Egypt studying in a British University, then I birthed triplets, two boys and one girl,” she narrated to Breitbart News. “It’s not easy to take care of my kids, so I wanted to go back to my country, to East Turkistan. I need my parents to help me.”

“In 2015, after being in prison three months, one of my kids passed away because the Chinese government wanted to give them surgery. I don’t know what surgery,” Tursun recalled. “I don’t know what they’re doing to my son. He passed away. Because my one kid passed away, they let me stay freely in my parents’ home to take care of the other two kids.”

“At that time … 24 hours, they are watching me. I cannot use internet, I cannot go outside from home, I cannot talk with anybody, I cannot use cell phone even. And, of course, I cannot have religion,” Tursun continued. “Of course, that time was a very very horrible experience.”

Tursun recalled that a Communist Party agent lived in her home to monitor the family while they mourned the death of the baby. Other testimonies from East Turkistan have revealed a systematic government implementation of Han Chinese agents living in Uyghur homes and, on some occasions, sleeping in bed with Uyghur women while their husbands are tortured in a concentration camp.

Tursun still does not know what happened to her infant boy. In past interviews, she has speculated that Chinese officials killed the baby via force-feeding, but she was not present for what happened as Chinese Communist Party agents were reportedly torturing her in a separate part of the concentration camp.

Tursun returned to a concentration camp in 2017, she told Breitbart News.

“At that time, my kids were one year old and there were two [of them]. They took me to prison and wanted to ask me a lot of questions. I have three days and nights, nonstop questions. I cannot sleep, I get tortured — electric, in my head,” she narrated. “They shear[ed] my hair, give me electric torture, and give me to take some medicine that led me to answer. I don’t know what medicine this is.”

The beatings and torture were so severe that Tursun lost hearing in her right ear “because [of] a lot of blood coming from my ear,” she recalled. “And they broke my nose.” 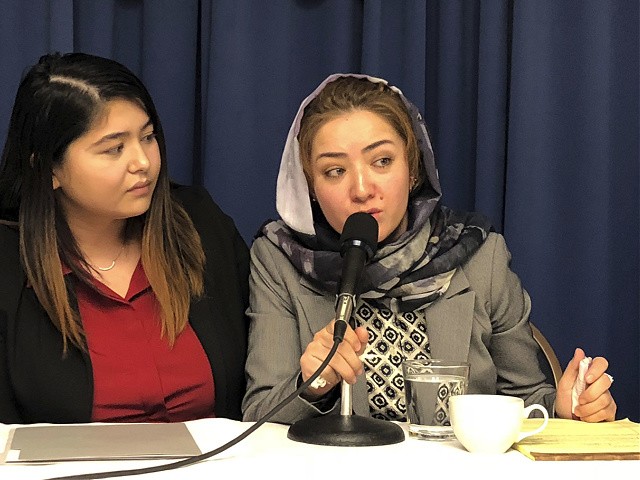 Mihrigul Tursun, right, speaks at an event at the National Press Club in Washington, Monday, Nov. 26, 2018. Tursun, a member of China’s Uighur minority is detailing the torture and abuse she suffered at the hands of Chinese authorities as part of an escalating clampdown on hundreds of thousands of members of the country’s Muslim minorities. Through a translator she said she spent several months in detention in China where she was beaten, tortured with electric shock and given unknown drugs. (AP Photo/Maria Danilova)

Tursun recalled that, contrary to Chinese claims that the camps offered “vocational training,” agents clearly asserted a punitive reason for her stay. She noted that the Communist Party put her through a Kafka-esque process in which she was told she had received two life sentences in prison or, if she chose, execution in a camp.

“I don’t know actually for what,” Tursun explained. “Because you go to Egypt and you are Muslim, you have religion. Of course, because [I want to live], I tell them I am not Muslim, I don’t have religion, even I cannot pray. But it’s not helpful.”

Agents later told her that they would not execute her if she spied for the regime abroad, Tursun said — coinciding with extensive reporting revealing that Beijing often pressures Uyghurs abroad to engage in espionage against their own people in the name of communism. The alternative to spying, she added, was death. She could choose three options.

The least painful, Tursun recalled, was a firing squad execution, which would cost her 600 yuan ($94) per bullet if she chose it.

“Of course, this is a terrible life, but I don’t lose hope … I have to take care of my kids,” Tursun said.

The Chinese Communist Party ultimately released her and allowed her to travel to Egypt, where she defected to the United States.

Since going public with her story, Tursun has faced an unrelenting campaign of character assassination by the Chinese state. Chinese government publications and broadcasters have repeatedly referred to her as a liar and mocked her story.

“I did an experiment: Sending the link [of the article] to ordinary Chinese I know. Most of them laughed when they heard Tursun’s testimony,” a propagandist at the Global Timeswrote in 2018, referring to her first testimony given at the National Press Club in Washington, DC.

Beijing has dismissed all Chinese concentration camp victims as “actors,” offering no evidence that their testimonies are not real.