Cuban communist authorities held a trial culminating on Friday for 21 protesters who took to the streets on July 11 to protest against communism, prosecuting children and adults with mental health issues along with healthy adults in one mass trial.

A prosecutorial indictment from Holguín, eastern Cuba, obtained by Breitbart News and verified by sources familiar with the proceedings, documented a mass trial for 21 people ranging in age from 16 to 59. The individuals were all allegedly present during the same protest on July 11 and all face the charge of “sedition.” Yet the detailed “crimes” in question vary widely, from allegations of punching and stoning police officers to filming a protest to simply being present during what the prosecutor in charge described as a “tumult” meant to incite “counterrevolutionary” thinking.

The document, a 31-page indictment, confirms prior reports from November, when families of the accused received notice of the charges against their loved ones. The U.S.-based Martí Noticias confirmed the charges at the time, but omitted much of the detail in the accusations present in the document obtained by Breitbart News. Cuban human rights activists have also confirmed that the individuals in question were arrested for participating in anti-communist protests, and that the families of the minors tried alongside adults charged with much more severe crimes, were told of the trial this week.

The mass arrests of children on July 11 and during the crackdowns that followed have defined police repression in Cuba following the event. The NGO Cuban Prisoners Defenders confirmed that month that the regime was holding “summary trials” where as many as 30 people were being rapidly sentenced for crimes in the same trial and with little defense, a human rights violation. International pressure forced the regime to free some of the implicated children, who testified to abuses such as rape threats and being tossed into jails with adults.

The Holguín indictment lists four children – Yeral Michel Palacios Roman, 17; Ernesto Abelardo Martínez Pérez, 17; Ayan Idalberto Jover Cardoza, 17; and Keyla Roxana Mulet Calderón, 16 – among the 21 defendants who are part of the same proceedings. Two of the boys, Palacios and Martínez, are listed as members of the Committees for the Defense of the Revolution (CDR), the Communist Party’s civilian spy networks. All four, however, are facing 15 years in prison.

At least one of the adults – William Manuel Leyva Pupo, 20, facing 18 years in prison, reportedly has a history of mental illness, which did not result in his case being separated from the rest.

The Holguín prosecutor, Fernando Sera Planas, accused all 21 people of being part of a widespread conspiracy to surround government agency headquarters around the city and “create a majority that would transmit the idea of a state of generalized nonconformity” among the Cuban population. The prosecutor creates the image of a violent mob meant to “disavow the authority of Cuban state institutions with the purpose of altering the socialist social order enshrined in the constitution of the Republic of Cuba.”

Nearly every city in Cuba experienced protests on July 11, all clearly calling for an end to the repressive 62-year regime; the vast majority of them were peaceful. The mob scene described by the indictment is at odds with the few images and eyewitness reports of the day that escaped communist censorship.

“From the crowd of people, without being able to determine who, counterrevolutionary slogans were shouted that fomented disturbances, as some profoundly lacerated patriotic feelings,” the prosecutor contended, admitting that Cuba sent violent state agents out to suppress the crowd in response to “counterrevolutionary slogans,” not to violence, and that police failed to conclusively determine who was doing much of the agitating. 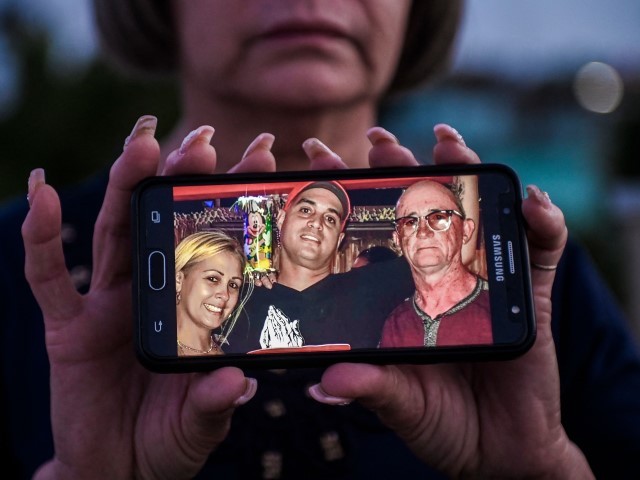 Zoila Rodriguez Marzo shows on January 10, 2022, at her home in Havana, a photo on her mobile phone of her son Exeynt Beirut (C), her daughter Katia Beirut (L) and the father of her children, Fredy Beirut (R), the first detained in Guantanamo since July 11 and the other two detained after the anti-government protests in La Guinera since July 12, 2021. (YAMIL LAGE/AFP via Getty Images)

The indictment goes on to claim that several of the individuals facing shorter sentences, including the minors, simply came to add to the already-existing crowd and support the cause. Eight of the 21 have been tied to the sedition charge for “informing the results of their acts through social media and making believe that they had created a situation of greater danger to the stability of the aforementioned political and government institutions” – in other words, for social media posts.

These individuals are being processed in the same trial as others charged with, among other crimes, throwing rocks at police officers; punching a state security officer in the throat, and ripping cement tiles off the floor to break them into piece and attack police with them.

Four others facing charges – Jorge Luis Martinez García, 18; Marcos Antonio Pintueles Marrero, 18; and Yoel Ricardo Sanchez Borjas, 18, all of whom are facing 18 years in prison; and Yosvanis Rosell García Caso, 32, who is facing 30 years in prison – stand accused of assaulting police officers, but the prosecutor admits “the victims could not identify their attackers.” The four allegedly appear visible in video footage taken at the scene. Several of the people in this trial are facing over a decade in prison for taking video footage at the scene.

The prosecution’s argument also ironically serves as evidence that the communist state agents – not the protesters – instigated the violence. The prosecutor recounts, citing eyewitness testimony, that about 40 communists “armed with sticks and red and black armbands” surrounded the Communist Party headquarters in Holguín to intimidate the protesters and get them to stop.

As the trial began this week, the relatives of the defendants made public statements condemning the accusations, noting that many of the eyewitnesses were police officers and that, aside from their testimony, little evidence justifies the outrageous sentences requested.

“The witnesses were two police officers. One accused him of throwing rocks and another of threatening to kill him, something that is incredible because my brother is a good person and incapable of something like this,” Elaine Rodríguez, Maykel Rodriguez del Campo’s sister, told CiberCuba this week. “No one saw him throwing rocks.”

Yosvanis García Caso snuck audio out of prison this week announcing a hunger strike when the inevitable guilty verdict comes down.

“Everything they are doing is arbitrary and they are violating all our rights, I have not committed any crimes and I will stand firm until the final consequences,” García said, using a term commonly used by Cuban political prisoners to mean they will engage in a hunger strike until death.

Idelsys Pupo, the mother of William Manuel Leyva Pupo, denounced this week that her son had been tortured in prison.

“The second chief of the prison, along with other guards, beat my son, they choked him and threw him against electric cables,” Pupo said, according to the Spanish online newspaper Diario de Cuba. Her son suffers from an unspecified psychiatric condition and contracted Chinese coronavirus in prison, loved ones have asserted.